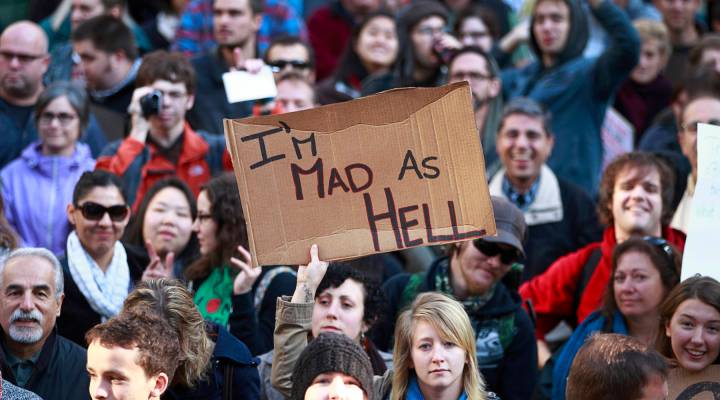 Inspired by the Occupy Wall Street protest in New York City, thousands of people took to the streets in cities across the world to voice their anger about what they described as corporate greed. Jeff Vinnick/Getty Images
I've Always Wondered ...

Inspired by the Occupy Wall Street protest in New York City, thousands of people took to the streets in cities across the world to voice their anger about what they described as corporate greed. Jeff Vinnick/Getty Images

What do the CEOs of big companies actually do all day? There are studies that say CEOs make 200 times the wage of an average employee at their company. Are CEOs really adding 200 times as much value?

“I’ve asked myself this question regularly and haven’t come up with the justification for the exorbitant pay,” Heather Slavkin Corzo, director of investment at AFL-CIO, the largest labor union federation in the U.S., told Marketplace. For the past few years, AFL-CIO has been tracking executive pay at S&P 500 companies. According to their calculations, in 2016, CEOs of those companies earned an average of $13.1 million in total compensation. In comparison, their workers — those in non-supervisory roles — earned an average of $37,632. That would make the CEO-to-worker pay ratio 347 to 1.

Most Americans believe that CEO pay has gotten out of hand and is too high. However, directors who sit on the boards of these companies and make decisions about executive pay insist that this level of compensation is the only way they can attract qualified candidates.

Blame Congress. Back in 1993, Congress said that if corporations want to write off executive pay over $1 million from their taxes, they have to show that the pay is based on some measure of performance, said Lynn Stout, a professor of corporate and business law at Cornell Law School. The requirement was supposed to help curb CEO pay, but the idea backfired.

“The obvious and most easily quantifiable thing is always share price,” explained Stout. “This sparked an era in which CEOs were compensated largely through options, which coincided with the beginning of one of the strongest bull markets of the 20th century. So CEO pay skyrocketed in the ‘90s.”

And has kept climbing ever since.

In 2016, the Rock Center for Corporate Governance at Stanford University surveyed 1,202 Americans about what they thought of CEO pay at 500 of the largest publicly traded companies. They found that “disclosed CEO pay at Fortune 500 companies is 10 times what the average Americans believe those CEOs earn. The typical American believes a CEO earns $1 million in pay, whereas median reported compensation for the CEOs of these companies is approximately $10.3 million.”

“Corporations and their boards need to do a better job explaining and justifying CEO pay arrangements,” Nick Donatiello, lecturer in corporate governance at Stanford Graduate School of Business and one of the survey’s authors, said in 2016. “It is remarkable when 74 percent of Americans agree about anything in today’s environment — particularly something as politically charged as CEO pay. This is a warning that companies need to do a better job of justifying CEO pay levels by communicating how much value their CEO creates and how much compensation is required, given to market for talent, to attract and motivate the right people.”

So why are CEOs paid that much anyway?

Mainly because many of the board directors believe that they are one out of a tiny pool of people who can actually lead their company. At least, that’s what Donatiello and his colleagues found when they surveyed directors serving on the boards of the largest 250 U.S. companies.

Most directors agreed that it is impossible to be the top company in an industry without the top CEO. As a result, directors are often willing to pay a lot of money for CEOs whom they consider to be leaders within their industry.

What CEOs do not do

However, beware giving CEOs more credit than they are due. Many people believe that CEOs should not be the only ones rewarded for the success of the company.

“[People] don’t understand that companies are enormous and how they perform depends on the efforts of many many different people with a huge element of luck and timing thrown in and that you know CEOs are not necessarily the omnipotent characters they’re often portrayed to be,” explained Stout.

“One of the things I hear a lot when I’m talking about executive compensation is that CEOs are like sports stars and if I’m OK with LeBron James making $31 million this year then I should be OK with a CEO making $31 million this year. But to me that’s absurd. People watch the Cavs because they love LeBron James. Nobody goes out and buys a box of Oreo cookies because they love Irene Rosenfeld or takes out a loan from Wells Fargo because of Tim Sloan. With a star athlete, that individual is the draw that is driving a lot of viewers and a lot of revenue. With the CEO, it’s just not the case. Yeah, they’re making big decisions but they’re not the only person that’s responsible for the success of the business.”