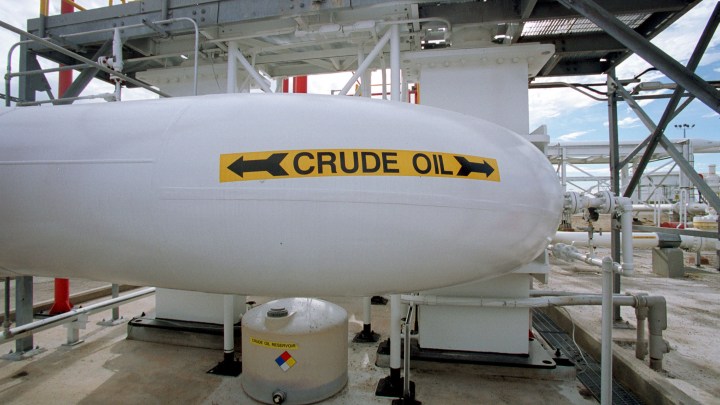 COPY
Transitioning away from oil, for countries that depend on the industry, is easier said than done. Joe Raedle/Newsmakers
COVID-19

Transitioning away from oil, for countries that depend on the industry, is easier said than done. Joe Raedle/Newsmakers
Listen Now

The COVID-19 pandemic has routed the oil industry, and countries that depend on oil. Oil-rich countries have been talking about transitioning away from oil, but it’s so much easier said than done, and many were in no way prepared.

Roger McShane, Middle East editor for The Economist, wrote about this in his recent article “There Will Be Pain.” He spoke with Marketplace’s Sabri Ben-Achour and the following is an edited transcript of their conversation.

Sabri Ben-Achour: Just how bad has the coronavirus been for oil-rich countries?

Roger McShane: I mean, it’s been pretty bad. I don’t want to overstate things. I mean, when the price of oil futures went negative earlier in the year, that was obviously really bad. Now it’s rebounded a lot. It’s up to around $40, $45 for Brent crude, but that’s still way below the the sort of fiscal break-even price for many oil producers in the Middle East. I mean, nearly every oil-exporting country in the region needs the price of oil to rise at least $10 in order to balance their books. So, you know, they’re all in pretty bad shape when it comes to their budgets.

Ben-Achour: Haven’t countries like Saudi Arabia have been trying or hoping to move away from oil for years now, if not decades?

McShane: Yeah, I mean, if you look around the region, every country has, you know, a reform plan. But, the rulers of Saudi Arabia have been talking about diversifying for decades, as you say. And there’s more urgency now, there’s been more urgency, I would say, over the past five years. And they’ve started to do things like, you know, recently raising the value-added tax, other countries have cut back subsidies. I would just say that sort of, to this point, they’ve been moving quite slowly. They’ve been sort of grabbing the low-hanging fruit.

Part of this is that the public sector is still the region’s main employer, and that’s both in the oil-producing countries and in the non-oil-producing countries. And if you look at the Gulf, you know, their economies still revolve around oil. And, right now, they are speaking about privatizing a bunch of different industries in order to raise revenue. And the question that has to be asked is sort of why have they waited so long?

Ben-Achour: Well, right. I mean, what has been holding them back?

McShane: Part of it is that this is just really painful, a lot of these reforms. And certainly now they’re going to be harder to do, while the price of oil is so low, and there isn’t a ton of money to sort of smooth the transition to “less oily” economies. But the crisis also sort of provides, I would say, an opportunity, and there is sort of this urgency, as I said, to sort of build more sustainable economies and more representative governments. But that also means rewriting the social contract. For decades, Arab rulers have sort of hoarded the wealth and sort of bought loyalty by providing free services and government jobs. Now, if all of a sudden, they’re going to be providing fewer government jobs, and all of a sudden the services are going to cost money, and they’re going to provide fewer subsidies, all of a sudden the people might think, “OK, well, you’re asking us to sacrifice but you’re giving us no say in the matter. We want more say in the matter, which means more representative government.” And we’ll just see how Arab leaders react to that.