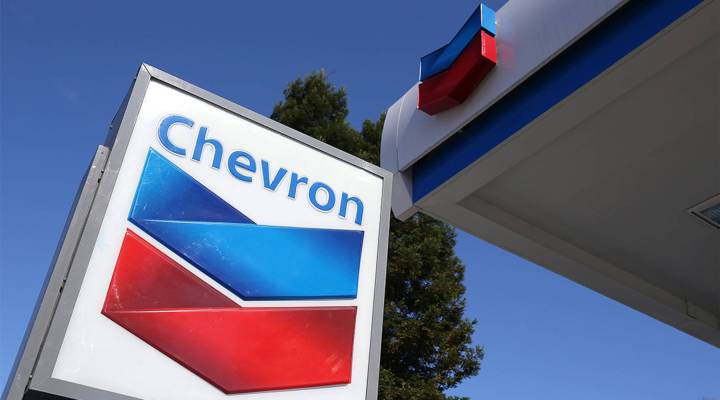 COPY
Chevron recently launched a "news" website in the Permian Basin in Texas, complete with local stories about puppies followed by advertisements for the oil giant. Justin Sullivan/Getty Images

Chevron recently launched a "news" website in the Permian Basin in Texas, complete with local stories about puppies followed by advertisements for the oil giant. Justin Sullivan/Getty Images
Listen Now

Chevron just announced it’s buying a U.S. oil company called Noble Energy in a $13 billion deal, including debt. It has been a while since we’ve seen a big acquisition in the oil sector, which has been hurting since oil prices dropped at the beginning of the COVID-19 pandemic.

But while the oil industry may be down right now, Monday’s deal could be a sign that it’s not out.

When oil prices fall sharply, that’s usually followed by a wave of mergers and acquisitions, according to Jim Burkhard of IHS Markit.

“The big oil companies of today, in fact, are the result of oil price weakness in the late 1990s, when we saw a big wave of mergers,” he said.

When oil prices plummeted back in April — even going negative for a day — they dragged down the value of smaller energy companies. Tom Seng, director of the School of Energy Economics, Policy and Commerce at the University of Tulsa, said Chevron likely saw a deal and pounced on it.

“All energy company stocks are down. So to some extent, it is … somewhat of a bargain purchase, I guess you could say,” he said.

In the last few weeks, oil prices have settled at around $40 a barrel. Seng said if oil companies like Chevon are looking to acquire other energy companies, “at least right now, your thinking has to be that prices will continue to slowly but surely move up, and so if you don’t act now, you’re going to pay for it in the future.”

Oil prices could always fall again, or they could just stay put for a while. Economist Philip Verleger said Chevron is likely most interested in Noble Energy’s oil reserves in Colorado, West Texas and abroad.

“And these are reserves that can be produced profitably at $40 a barrel,” he said.

However, not by all oil companies. Michael Webber, energy professor at the University of Texas, said we’re likely to see more oil company bankruptcies and more acquisitions as companies try to figure out ways to make drilling more efficient.

“One way to lower the cost and achieve greater efficiency is to consolidate, to have some companies come together, so they can share resources,” he said, adding that Chevron’s deal is a sign there is still life in the oil industry. Even as the pandemic has kept people at home, he said, demand for gas, diesel and jet fuel hasn’t gone away.