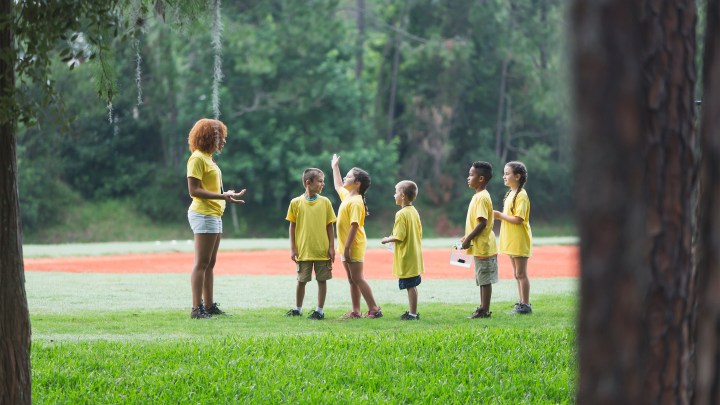 COPY
Summer jobs, like those of camp counselors, will most likely be harder to come by this year. Getty Images
COVID-19

Summer jobs, like those of camp counselors, will most likely be harder to come by this year. Getty Images
Listen Now

Rayleigh Schlauder has been going to Rockbrook Camp for Girls in Brevard, North Carolina, since she was 10 years old. She’s 22 now, and this summer would have been her seventh as a counselor. But all the arts and crafts, kayaking and campfire songs will have to wait. Camp is canceled because of COVID-19.

Schlauder is going into her senior year at Auburn University in Alabama, where she’s studying English literature. For three months of work as a camp counselor she makes $3,300, which she usually uses to pay for books. “Which doesn’t go very far because textbooks are expensive,” she said.

And it won’t just be money she’ll miss out on this summer. There’s also experience. Schlauder wants to be a teacher, and camp helps her build leadership skills. “It gives me the opportunity to create bonds with these campers,” she said. “A lot of times these girls are looking for role models.”

Summer is coming without a summer job for a lot of young workers. According to the federal Bureau of Labor Statistics, 56% of people ages 16 to 24 had jobs during last summer’s employment peak in July. And though the government doesn’t make employment projections, experts say those numbers will likely dip this year.

This year is going to be tough on people who work in travel, tourism and restaurants, which hire a lot of seasonal workers. “What we’ll actually see is not the season not coming, but it coming in such a partial way that there’s a lot of job destruction,” said Betsey Stevenson, a professor of economics at the University of Michigan.

That destruction will reach beyond young people to workers of all ages who may take on second jobs in the summer to earn extra cash. For a lot of businesses in coastal vacation towns, summer isn’t just the season — it’s the only season. Tour operators, bike rentals and boardwalk shops typically close for winter.

“This is going to be a rough year financially. There’s no ands, ifs or buts,” said Mark Novota, managing partner at Wequassett Resort in Cape Cod, Massachusetts.

The resort usually brings in around 500 employees to work as housekeepers, servers and groundskeepers. Nearly all of them are seasonal and come back year after year. This summer he thinks he’ll have to cut hiring in half because bookings are way down. “We’re going to onboard as demand grows,” he said. “But we don’t exactly know what that demand will be.”

A lot of businesses, like sports franchises, don’t know if there will be any demand at all. Sarah El-khalily was supposed to work for the Dodgers Foundation this summer, but with Major League Baseball on hold, she’s out of a job. “I’ve been working every summer since I was 17, so it’s definitely a really tough situation,” said El-khalily, who’s 20 years old and will be a senior at the University of California, Santa Cruz, this fall.

El-khalily looked everywhere for work but didn’t have any luck. Then she got an internship with an education nonprofit. She’ll work fewer hours and won’t make as much as she would have if the Dodgers were playing ball. But she hopes the internship will help her when she applies to grad school in the fall.