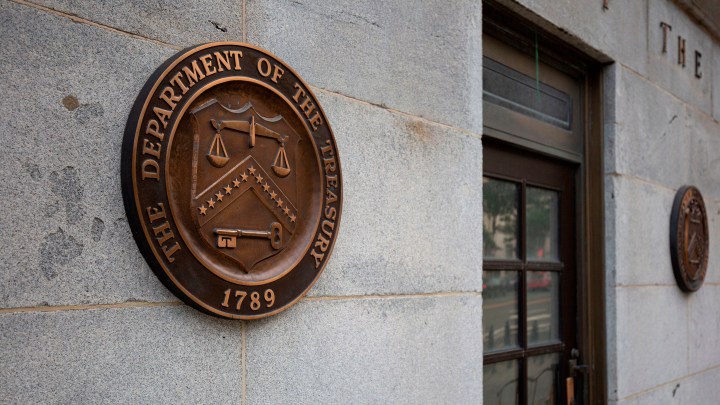 With the mountain of debt the federal government is amassing during the pandemic, it helps that interest rates are so low. There’s renewed talk of an additional strategy to defer the debt burden — borrowing by selling bonds that don’t need to be paid back until … well, ever.

Think about it: What do people do if they can’t quite afford that new car? They take out a seven-year loan instead of a five-year loan.

Marketplace’s senior economics contributor Chris Farrell has been looking this. The following is an edited transcript of his conversation with “Marketplace Morning Report” host David Brancaccio.

David Brancaccio: So one way to manage this mountain of debt is to go really long?

Chris Farrell: Yes, how about 100 years? I mean, right now, the longest U.S. Treasury bond is 30 years. But the basic idea behind urging the federal government to issue “century bonds” is to lock in today’s low rates. So the basic insight is no different than the homeowner: You lock in low rates with a 30-year fixed rate mortgage, so then it doesn’t matter if interest rates go up, if inflation goes up. You’re still going to pay that low interest rate on a 30-year mortgage. Same idea.

Brancaccio: All right. So we’re talking about 100 years, which sounds like a really long time, but why stop there, Chris?

Farrell: Yeah, exactly. The most intriguing idea that’s out there is for the U.S. government to sell what’s called “perpetuals.” Now these are bonds and they pay a fixed interest rate to investors. But the payments have no end date and no principal payments. So the bond exists until the federal government has a surplus or the timing is right, because the government has the right to repurchase their perpetuals at market prices.

Brancaccio: I mean, there really would be an investor who’s willing to give the U.S. government money until stardate 3342.6, and we have warp drive?

Farrell: Well, when you put it that way … but history says yes. And here’s the point: John Cochrane, senior fellow at the Hoover Institution, Stanford University, and he’s really a thoughtful proponent of the Treasury selling perpetuals. But what he’s convinced me is it would be a smart debt management move for the Treasury to go bold, to go along and embrace the perpetual.

Brancaccio: I did a lot of papers on European imperialism in college. I remember the Brits used these perpetuals — during the British Empire.

Farrell: Right, they almost became synonymous with the British Empire in the 18th and 19th centuries. And it’s intriguing that the last of the consols were paid off in 2015. But this perpetual has a long history. It’s traced back to eighth century Europe and even Alexander Hamilton used perpetuals to help refund the Revolutionary War debts of this newly independent United States, and the last of them were retired in 1835.

Brancaccio: OK, and let me just be clear on the perpetual: It’s not that they have to go long. It’s possible that the government could — because the conditions are right — say, “Yep, we’re ready to pay you back.”