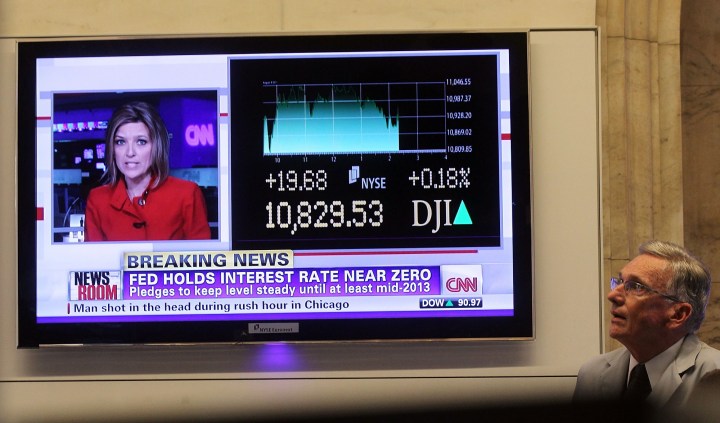 COPY
A recent paper by economists suggest income inequality is the reason why interest rates have been low for decades. Above, a 2011 news report shows the Federal Reserve decided to keep interest rates near zero until 2013. Photo by Mario Tama/Getty Images

A recent paper by economists suggest income inequality is the reason why interest rates have been low for decades. Above, a 2011 news report shows the Federal Reserve decided to keep interest rates near zero until 2013. Photo by Mario Tama/Getty Images
Listen Now

Low interest rates have been a part of our economy for more than two decades, but what accounts for that downward shift?

One explanation is growing income inequality, according to a paper by economists at Harvard University, Princeton University and the University of Chicago.

How exactly does the phenomena of the rich getting richer and the poor getting poorer translate into low interest rates? “Marketplace Morning Report” host David Brancaccio put that question to senior economics contributor Chris Farrell.

David Brancaccio: The guardians of interest rates are keeping interest rates low as a stimulus to spur the economy. OK, we talk about that every day. But also the fact that the baby boom or older is contributing to these low interest rates, you think?

Chris Farrell: Right, because interest rates have been coming down for a longer period of time than the pandemic or even the 2008-2009 Great Recession. So think baby boomers, right? We have this massive baby boom generation, and here’s the underlying dynamic: They’re saving in anticipation of needing money in their later years. And a lot of that money goes into fixed-income securities, you know, like bonds and money market funds. So higher retirement savings rates by boomers and their peers elsewhere in the world, that puts downward pressure on rates. And if this idea is essentially right, David, you know, we’re probably not that far from the day when rates could start climbing higher as boomers spend down their savings and retirement to maintain their standard of living.

Brancaccio: Right, because people, when they get older, take a more conservative approach. They tend to buy bonds. Demand for bonds means interest rates don’t have to be so high to get buyers for those bonds, and interest rates then come down. But when central bankers met late this summer — not quite in Jackson Hole, Wyoming, it was a virtual meeting — there was an interesting paper that added a new wrinkle to this that you’ve been reading.

Farrell: Right, so rather than the baby boom generation, they put the onus on rising income inequality.

Brancaccio: Well, what’s the connection as the rich get richer and the poor get poorer?

Farrell: So it’s been well documented, right? Just as you said, the rich are getting richer. And the thing is, the wealthy, they can’t spend all they accumulate. They end up saving huge sums of money. And the economists estimate that the top 10% accounted for 30% to 40% of total private savings in the U.S. over the past quarter century. So much of that money went into bonds and other fixed-income securities, which in turn, drove rates lower. So it’s the wealthy and their savings that drove interest rates down.

Brancaccio: And the further irony that if you’re not wealthy, and you’re just trying to eke by on the little that you have saved, these low interest rates hurt you because you’re not getting the returns you need to live.

Farrell: Right, but if you are wealthy, and you own real estate, equities, private equities, I mean, they have been soaring in value. And one of the reasons why so many assets have increased in value is this low interest rate environment that we’re in. So there are a couple of implications of this, David. I mean, one is, well, maybe we’re in a low-rate environment for a longer period of time than we’re thinking. But more importantly, the question about baby boom demographics versus inequality, this is not an abstract discussion. I mean, look the trend toward increasing inequality. It’s having a big impact on our economy. And I think it’s an underestimated impact in our economy. And the other thing is, rising income inequality is a much bigger threat to America’s standard of living than aging boomers. You know, one way to think about it: Welcome increased longevity, but worry about rising inequality.