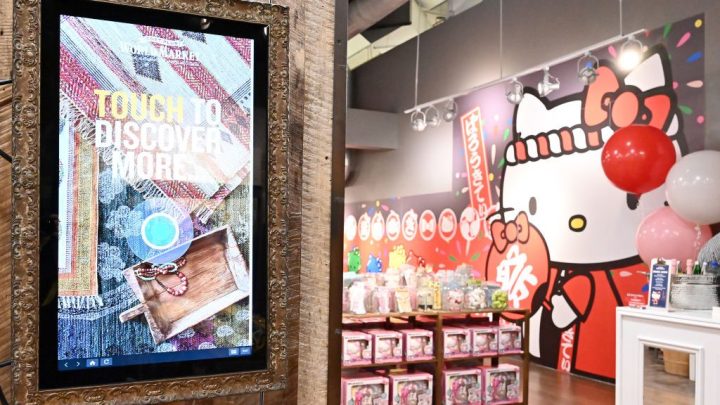 In the ’90s, Japan was suffering with a prolonged economic downturn. At the same time, Japanese pop culture icons like Pikachu and Hello Kitty could be found the world over — and continue to be ubiquitous today. Matt Alt is a Tokyo-based writer and translator who made Japan’s pop culture the subject of his forthcoming book, Pure Invention: How Japan’s Pop Culture Conquered the World. The following is an excerpt from the book. You can listen to Alt’s interview with Marketplace host Kai Ryssdal by using the media player above.

A woman’s face emerges from darkness. She kneels before a ma­chine whose output bathes her angular features in an eerie green light. She rises and walks away, footfalls echoing on the pavement. A basket of flowers sways from the crook of one elbow, the only sign of organic life in this dark, mechanized place. As she moves from shadow into the light of a streetlamp, a strange-looking car roars by, momentarily obscuring our view. The camera pulls back to reveal our heroine standing before a shuttered storefront, pedestrians hur­rying past. Who is she waiting for? We barely have time to wonder as the camera pans up to reveal massive neon signs and billboards, cryptic brand names looming over the cityscape. This is a consumer metropolis, from the looks of it — but where? Is this Times Square? Downtown Tokyo? The camera pulls further back, revealing more of a mysterious urban landscape that, it becomes obvious, is nowhere we have ever seen—nowhere that has ever existed. We soar over rooftops, turrets, and machinery, all encircled by massive walls marked with a mix of Roman numerals and Asian calligraphy. A tense drumbeat swells as smokestacks belch into the midnight sky. This is less a city than a fortress; a literal military-industrial com­plex.

The screen flares, and a title appears: FINAL FANTASY VII. The rising strains of a synthesizer — haunting, melancholic — hint at won­ders to come.

Final Fantasy VII was a videogame, and when it debuted in 1997, the world had never seen anything like it. It was the latest install­ment in a popular (and increasingly misnamed) series, but previous Final Fantasy titles had been delivered in the standard, two-dimensional, squashed and flattened perspective of traditional vid­eogames. Final Fantasy VII was a different beast altogether. Though blocky and primitive by current standards, it was fully rendered in three dimensions — a major technological feat for the era. Even more groundbreaking, it dared to presume something new: that a video­game could have the dramatic pull of a Hollywood blockbuster.

Rather than the usual twitch-reflex fisticuffs and gun battles, Final Fantasy VII plunged players into the midst of a drama. Their role was one of a ragtag band of ecoterrorists determined to stop a face­less corporation from sucking their planet dry of its lone energy source. We learn that the waiting woman is Aeris, a flower peddler who turns rebel in the course of her quiet romance with the player-character, a former soldier with the disarming name of Cloud. Final Fantasy VII presented gamers with a cast of characters as well devel­oped as those from television shows or movies, and followed them through an unpredictable, at times deeply moving narrative. The game’s dramatic peak — Aeris’s shocking, too-soon death — affected young players so profoundly that one modern critic has called it “the moment when gaming culture stood still.”

Of course, the brave new world of Final Fantasy VII wasn’t actually out of Hollywood at all. It was a Tokyo blockbuster, and it would inject a megadose of Japanese sensibilities into the American main­stream: big-eyed, bushy-haired anime characters and their manga-style melodrama; androgynous heroes; the very idea that videogames could be meditative explorations as well as thrill rides.

Sony’s marketing team poured $30 million, unprecedented for a videogame, into an all-out media blitz modeled on the marketing campaigns for tentpole American films. They targeted young audi­ences with ads in Marvel and DC comic books, adults with spots in Rolling Stone, Playboy, and Spin, and everyone with slick commercials that aired in movie theaters, during football games, on MTV, even during Saturday Night Live. “They said it couldn’t be done in a major motion picture,” teased one ad, taking aim at the establishment. “They were right!” Each commercial ended with a close-up of the PlayStation logo, with a young female voice robotically intoning the word as pronounced in Japanese: “purei-sutayshon!”

The previous bestselling PlayStation title, the British-made Tomb Raider, sold a very respectable hundred and fifty thousand copies in the first quarter of 1997. Final Fantasy VII sold a million copies in the quarter after its September release. Players didn’t seem to mind the game’s rushed translation, with occasionally misspelled character names and meme-worthy moments such as Aeris declaring of an­other character, “This guy are sick!!” If anything, the garbled lan­guage only added to the game’s exotic cachet, reinforcing the idea that it had emerged from a real-life technopolis almost as alluring as the fictional setting of the game itself. Sales would eventually reach thirteen million copies worldwide.

From the book Pure Invention: How Japanese Pop Culture Conquered the World by Matt Alt. Copyright © 2020 by Matt Alt. Published by Crown, an imprint of Random House, a division of Penguin Random House LLC. All rights reserved.