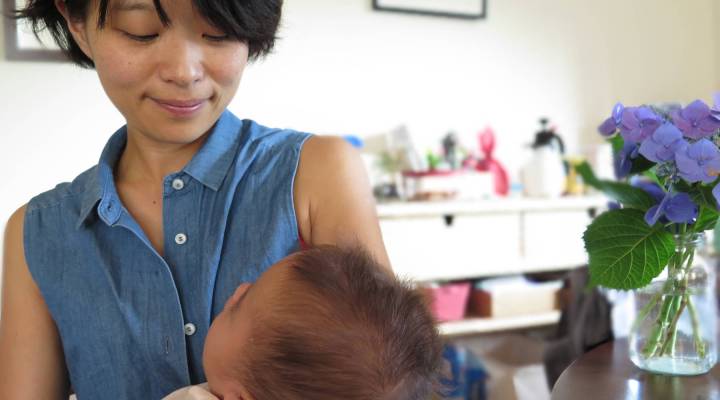 COPY
Kumi Matsumoto and her second child in Tokyo. On balancing the demands of motherhood and work in Japan, "I’m the kind of woman who does not think that quitting is realistic choice," she said.  Sally Herships

Kumi Matsumoto and her second child in Tokyo. On balancing the demands of motherhood and work in Japan, "I’m the kind of woman who does not think that quitting is realistic choice," she said.  Sally Herships
Listen Now

If you think you work long hours, meet Kumi Matsumoto.

“It’s very normal for us to stay until midnight,” said Matsumoto, who works for Japan’s Ministry of Foreign Affairs, “and sometimes we have to stay until early in the morning, [the] next day.” Matsumoto lives in Tokyo. She’s 41, and when we met she was on maternity leave. But when she’s in the office she often doesn’t get her assignments until late at night. She says the hours can be brutal – especially for women with kids. “Some ask their mother for everything about their family. One of them, I know, met her child only on weekends,” she said.

Matsumoto acknowledges that this was an extreme case, but because of the long hours Japanese workers are expected to put in, working mothers here have to ask for a ton of help. Much more than a typical American parent. “Mothers, babysitters, nursery schools,” she said, “and somehow manage to do it. But I know many women couldn’t do that much and just quit.”

While the government is hoping to persuade families to move to the countryside, schools like the Ishidoriya Elementary School in Hanamaki, a small city on the north of the Japanese mainland, are shrinking due to declining population.

After she had her first child, while working abroad in New York two years ago, Matsumoto started a support group at her workplace – Mothers and Fathers at the Ministry of Foreign Affairs. “I just got back to work as a working mother. And I felt very lonely in a way. Not lonely, my colleagues were very nice. I just didn’t know, who else is doing the same thing like me. Having or giving birth in foreign country and getting back to work. And I didn’t have any information about that,” she said. “For example  I didn’t know that I had flex time I can apply for when my child is under one. And  I didn’t know it till like three months later. And then I knew that I wanted to do that, but then I didn’t know how. I didn’t know what kind of paperwork I had to do.”

“I’m the kind of woman who does not think that quitting is realistic choice,” she said.

But Matsomoto is the exception. She notes that she has an understanding husband who helps with the kids. “He doesn’t even think of it as helping me,” she said. “He thinks of it as his thing. Our thing,” She says she also has an employer who she says is understanding of workers like her, who want to raise children.

But many young women in Japan don’t have the same circumstances. And so many simply don’t have kids at all.  Japan’s population is shrinking – fast. Plummeting birthrates are a larger problem faced by countries around the world, including Italy, Germany and Greece.  But Japan is at the forefront. Yu Korekawa, a senior researcher with the Population Dynamics Research department at Japan’s National Institute of Population and Social Security Research showed me a report on the future of the country’s population. It’s 42 pages long, but bottom line the numbers don’t look good — Japan’s population is expected to shrink in half by the year 2082.  In 2010, the country’s population was 128 million. By 2082, that number is projected to drop to 64 million.

While we were talking, Korekawa continually opened and closed his eyes. He looked tired. “I have two babies. Two daughters – one is seven years old and the other one is just eight months,” he said. “My wife is working and it’s kind of very difficult,” he said.

According to Korekawa, Japan’s population decline is mainly due to economics. Real estate is expensive. And if you work long hours you have to pay for childcare. It’s simple math. People just can’t afford to have enough kids to keep up with population losses. The magic number is 2.1. That’s how many kids Japanese families need to have, on average, to keep up with population losses. Instead, they’re only having 1.4 kids.

Last year the Ishidoriya Elementary School in Hanamaki had 330 students. Five years ago, it had 440.

“I have [a] good job and my wife is a lawyer so we don’t have any economic problem, but even for us it’s very hard to have one more baby, a third baby” said Korekawa, “because it costs much money to raise a child. Especially in Tokyo.”

But there are bigger problems lurking below the surface. One of which is Japan’s adherence to traditional gender roles. “There’s a very strong belief that a woman’s place is in the home. That mothers should have sole responsibility for child raising,” said Linda Lim, a professor of strategy, business and economic development in Asia at the University of Michigan’s Ross School of Business. But although Japanese women are staying home, and not entering the workforce in large numbers, they’re also not having babies. “It’s a puzzle,” said Lim, “but it isn’t really.”

She points to the long hours Japan’s famous corporate culture requires of workers. And when it comes to child rearing, women often go without help. “I’m in this tiny apartment, all day, all by myself, all day from 6 or 7 a.m. to 11 p.m. My in-laws or parents live an hour or two commute away, there’s no  childcare that’s nearby,” said Lim. “Even the child has a very long day because after school they go to all these cram schools,” she said. “I mean it’s hard enough to have one child, try and turn him into a genius, so he can get into college. Then I have another one, a few years later, I’m going to go crazy.”

The restaurant at the Marukan department store in Hanamaki is famous for its large servings of ice cream. The store will close in June. The building does not meet codes to withstand earthquakes and doesn’t have the money to rebuild.

The other choice, Lim said, is working in a corporate culture largely unfriendly to women. “Who wants to work, eleven hours a day in a corporation and commute two hours each way?”

Japan’s government is trying to address its population issues. “The reason for the population decline, one of the big reasons, is the over concentration of the population in Tokyo,” said Akiko Ito, deputy director of Japan’s Headquarters for Overcoming Population Decline and Revitalizing Local Economies.

It’s hard to escape depopulation. Even for the school principal who says his son has moved to the city. “He is interested in PR jobs and the number of that kind of job is very limited in Hanamaki so he prefers to live in Tokyo.”

“The countryside has a relatively high birthrate. But Tokyo has a very low birthrate,” she said.

So the government is trying to get people to move to the countryside.

The school used to have three classes per grade, but now it has only two.

At the same time, the government is trying to make workplaces friendlier to families all over – in the countryside and the city. Encouraging shorter hours, telecommuting, and even, helping foot the bill for matchmakers like Suehiro Matsuzaka, who works as a matchmaker in the small city of Hanamaki. While Matsuzaka has 140 male clients, he only has 110 women.

Suehiro Matsuzaka, a matchmaker in Hanamaki says some workplace traditions have changed. In the past, in the workplace, he said, senior employees would play unofficial matchmaker, but that that no longer happens. “If they do something like that, it will be criticized as sexual harassment. So that kind of custom is over. And also we had a volunteer matchmakers in the past. But that system is also gone.”

Young women, he notes, tend to leave for the city. Still he says, he marries about ten couples a year. A pretty solid success rate. But he’s just one matchmaker in one tiny city. Regarding the larger trend of depopulation across the country, “there is no solution,” he said.

While the federal government is keen to see residents moving to the countryside, local officials say the city has been losing between one to two thousand residents a year.

“Many Japanese believe there’s something unique about their culture and they fear any change because they fear that they will disappear culturally,” she said.

This shows how deep the country’s cultural beliefs and traditional values run, said Lim. But it also means that Japan is stuck – fighting against itself.

“It’s very very difficult, to very quickly, in a short space of time change your views, your values, your lifestyle, your work style. And what is the choice?” Lim said. “The choice, according to Prime Minister Abe, is that Japanese will eventually disappear. Even at that very very extreme, staring you in your face, you’re already shrinking in population year after year and yet you refuse to change.”