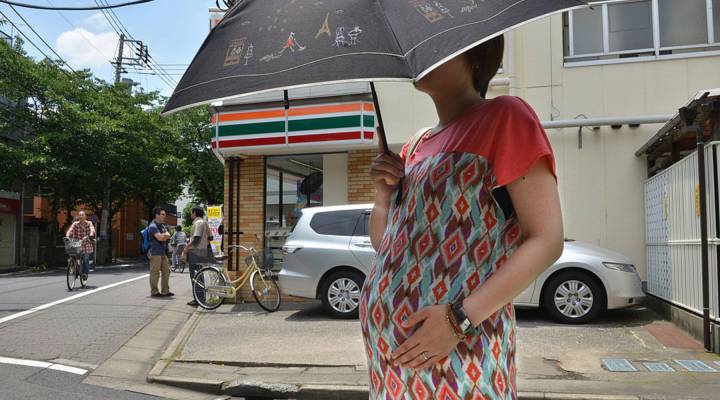 COPY
A pregnant woman walks to her office in Tokyo on July 2, 2013. Pregnant women or young mothers, many Japanese say they are victims of 'mata-hara' a name for 'maternity harassment' of mothers in employment, in an aging country in dire need of babies.  YOSHIKAZU TSUNO/AFP/Getty Images

A pregnant woman walks to her office in Tokyo on July 2, 2013. Pregnant women or young mothers, many Japanese say they are victims of 'mata-hara' a name for 'maternity harassment' of mothers in employment, in an aging country in dire need of babies.  YOSHIKAZU TSUNO/AFP/Getty Images
Listen Now

Kumi Matsumoto is a 40-year-old mother of two in Tokyo. With a government job and two kids, her life may sound typical. But managing to take time off from work to stay home on maternity leave with her second child means Matsumoto is anything but.

“I’ve never seen any pregnant women being a clerk or waitresses. I just wonder what happens to those people,” said Matsumoto.

In Japan, 70 percent of women who get pregnant leave work. Many don’t come back.

Japan’s economy is the third largest in the world. But it’s been sluggish and teetering on the edge of a crisis. The country is suffering from a massive population decline and is running out of workers.

As one solution, Prime Minister Shinzo Abe has been pushing for more women to enter the workforce.

But it can be staggeringly difficult for women to be accepted in the Japanese workplace.

Like in the U.S., there are all the typical pressures of being a working mom, but in Japan, there’s more.

One critical  problem, Yukari Horie, founder of Arrow Arrow, a nonprofit that teaches companies how to talk to their employees about maternity leave, is called “matahara”, or maternity harassment.

“We’ve heard stories from women, once they tell their boss that they’re pregnant, they would say that, ‘Oh, then I we guess we have no more jobs that you can do,’” Horie said. “‘It’s too bad that you’re leaving and I can’t work with you anymore, because you’re leaving, aren’t you?’”

Maternity harassment happens in the U.S. too, but in Japan it’s very common. According to the Japan Institute for Labour Policy and Training, one out of every five pregnant, full-time working women here experiences matahara. A big source of the problem, Horie said, is that management-level jobs are usually held by men who have traditional ideas of family structure.

“The person works is very devoted to work and his wife is a homemaker. So for those people, we try to explain, what it means to be a double-income family,” she said. “And we try to tell them that their own personal value is not the same as their company’s value.”

There are even posters in the Tokyo subway advertising the Japanese equivalent of a 1-800 number that pregnant women can call for help.Horie’s non-profit exists because it’s common that Japanese companies don’t know what’s appropriate to say to a pregnant employee. Employees don’t know what to say either.

And there’s another problem.  Unlike in the U.S., most big Japanese companies expect employees to stick around – for life, said Mitsuko Horiuchi, president of the Kitakyushu Forum on Asian women and a professor of gender equality at Bunkyo Gakuin University in Tokyo.

“That means that the workers must work until the retirement age,” she said.

That means no taking time off to have a baby. This often leaves Japanese companies wanting to hire men — young ones — and not young women, and definitely not older women who want to re-enter the workforce after having kids.

“Women quit their jobs, after they have a child. So [the companies] think this is a waste of money, to train the women,” said Horiuchi. “That is, I think, justification from the company side.”

In Japan, Horiuchi said, there’s an old fashioned, lingering discrimination against women in the workplace.  Only between nine and 15 percent of the members of Japan’s parliament, the Diet, are women, ranking Japan below Afghanistan and even Saudi Arabia.

“Even if you’re elected to the Diet, you’d have a smaller voice altogether. And a smaller number of opportunities to voice your opinions,” said Kiyomi Tsujimoto, one of the few female members of the parliament. “If you had children you had to raise, it would be an enormous challenge,” she said.

In a country where married women are legally required to take their husband’s name, said Tsujimoto, it can be hard to be a female politician.  When Prime Minister Abe heckled Tsujimoto during a government meeting, the incident made national headlines.

So, while Prime Minister Abe has announced a big push to create a society where women can “shine,” it can be hard to tell if it’s working. Companies say they’re hiring more women, but critics say the jobs they’re providing aren’t good ones.

As Matsumoto put it, women who want to work in Japan are often left facing difficult choices.

“In many Japanese companies, especially in big companies, women are traditionally divided into two different categories,” she said.

The first category has jobs just like men have. But that’s not the kind of job many women are getting. Instead, they’re offered work that falls into another category, “just work for women,” Matsumoto said, jobs like bank clerk, or work in retail — the difference between a job and a career.

These jobs, Horiuchi noted, are unstable with low wages. And it’s these jobs that half of women workers are getting. In the Japanese workplace she said, men and women continue to be treated differently.

“When you have the get together after the work and then you ask the female colleagues could you please serve sake,” she said. “Men’s side they don’t think that this is sexual harassment. But women’s side feel that this is.”

But in a country where wives of politicians are expected to show their support by walking three steps behind their husbands, it can be hard to get ahead – both for women, and, the country.

This story was produced through a collaboration with the international radio and multimedia project “Bending Borders.”