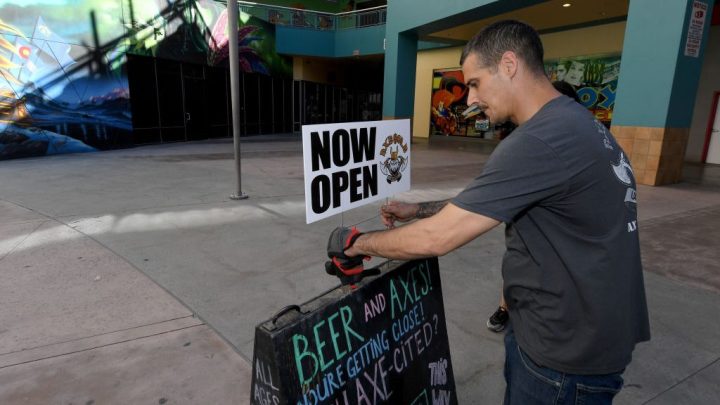 A "Now open" sign outside an indoor axe-throwing range and bar in Las Vegas, which is opening for the first time since closing in March. Ethan Miller/Getty Images
COVID-19

A "Now open" sign outside an indoor axe-throwing range and bar in Las Vegas, which is opening for the first time since closing in March. Ethan Miller/Getty Images

In many parts of the country life is beginning to feel if not quite normal, then something like a new normal. Businesses are able to reopen even in some of the areas that were hit hardest by the coronavirus, after stay-at-home orders that have been in place for up to three months.

In many of those same areas, cases of COVID-19 are trending upwards, causing some to ask if the lockdowns were lifted too soon, and if residents and businesses might have to go through it all again. That’s what is happening in Beijing, China, where some schools are closed again, there are new checkpoints, and some residential areas are being re-locked down. That’s because of a flare-up in cases after nearly two months with no new cases.

The spectre of a second shutdown weighed heavily on the stock market last week; major indexes experienced their biggest one day falls since March.

The reason for the fall is the fear that officials will turn to the same tool kit as in March to control the spread of the virus. That was to close businesses, tell everyone who could to work at home, and not to leave. The effects on local, and national, economies were catastrophic. More than 40 million people filed unemployment claims, small businesses closed their doors and struggled to get federal loans, cities implemented eviction moratoriums to protect renters who’d lost income, with a knock on effect on landlords. The Federal Reserve is warning the impacts will be felt for years.

“Retail has been devastated,” said Mark Cohen, director of retail studies at Columbia Business School. Not only were locations forced to close, but consumers are shifting their behavior, and disposable income, to critical needs.

A re-closing of businesses could also impact consumer confidence and delay a return to more profligate spending patterns.

So, how likely is another lockdown, of some sort? The answer depends on who you ask. Many local officials are now bullish about keeping businesses open to salvage their economies. Health experts, though, are concerned.

In California, where the death toll due to the coronavirus has topped 5,000 people, most counties are allowed to open gyms, malls, and hair salons, with new safety measures like limited capacity, strict social distancing, and extra cleaning. State Governor Gavin Newsom has said that an increase in cases is to be expected. He’s confident the reopening is being done in a phased, responsible, way, and re-closing won’t be necessary.

Contrast that to the state’s Public Health Director, Barbara Ferrer: “We are completely not out of the woods, we are still in the middle of the woods and we still have a lot of risk,” she said.

In North Carolina, which is seeing a surge in COVID-19 cases, and hospitalizations, the state’s health director has indicated she would contemplate another shutdown. “If we need to go back to stay-at-home orders we will,” Mandy Cohen the secretary of the North Carolina Department of Health and Human Services, told NPR.

“The bottom line is that people are re-opening despite the fact that the virus hasn’t changed, it’s just as contagious, and we are just as at risk,” said Anne Rimoin, an expert in emerging infectious diseases at UCLA Fielding School of Public Health.

She believes the increase in cases being seen in many places at the moment could be a reflection of behavior over the Memorial Day holiday, because there’s an approximately two week lag in case numbers showing up in official figures. That means we are not yet seeing the effects of the wide scale protests across the country, which brought people into close contact, or, crucially, the effects of businesses reopening.

There are some major differences between the situation in March, when little was known about the threat of the coronavirus, and now. There’s still a great deal of research to be done, but scientists do have a better understanding of the virus and how it’s spread.

Public behaviour is also different. In general people are avoiding crowds, although the protests of the last few weeks have been a notable exception. In many places mask wearing is required, and large “super spreader” events like packed sports arenas or concerts are still cancelled, which limits the transmission of the virus.

Hospital capacity in major urban areas is adequate to cope with the current case numbers, which was one of the major factors in the initial lockdowns. Officials were worried about overwhelming hospitals, and not having enough intensive care beds or ventilators. The situation is much better now, but it’s important not to get complacent, said Rimoin. “We were able to flatten the curve, but that didn’t mean getting rid of the virus.”

“I think we are at great risk of seeing a lot of backtracking from where we are now,” she said. “The question is whether people will accept being locked down again. There’s so much fatigue, and collateral damage.”