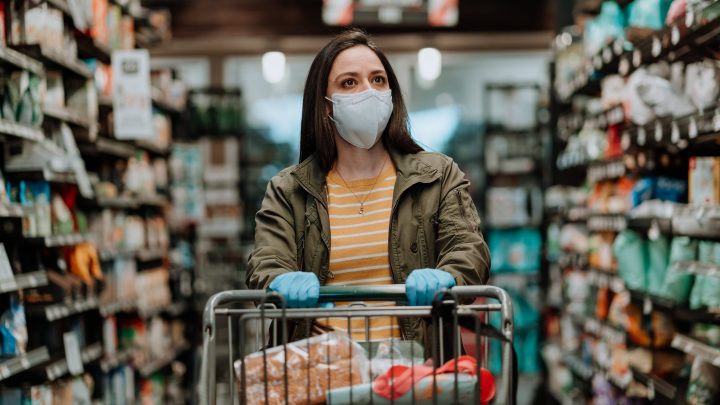 During the COVID-19 crisis, grocery spending rose for all generational cohorts. GabrielPevide/Getty Images

During the COVID-19 crisis, grocery spending rose for all generational cohorts. GabrielPevide/Getty Images

Some millennials who work from home are facing rising expenses during the COVID-19 pandemic, according to a new poll from CreditCards.com.

“Category by category, the biggest increase for all generations was groceries, which makes sense. It’s a necessity,” said Ted Rossman, an industry analyst at CreditCards.com.

Millennials and Gen X-ers are the “generations that are most likely to have kids living with them at home. So I think that’s probably what’s driving most of that,” Rossman said.

While millennials often get mistakenly lumped in with those in their teens, the study defined millennials as people aged 24 to 39. “There are an awful lot of millennials who have growing families, and I think that’s factoring into their spending,” Rossman added.

“My son has high-functioning autism. So he’s very sensitive to food textures and likes what he likes,” Castillo said. “He’s going through his food a lot faster. I find myself either having to go to the grocery more often or just completely stocking up in general.”

But there are other areas where she’s saved money, which include recreational activities, like taking her son to the aquarium.

While the report provides a snapshot of these different groups’ spending habits, it didn’t take into account those who have been laid off or furloughed from their jobs. Since the COVID-19 crisis started, more than 44 million Americans have filed for unemployment benefits.

Anna B., a 36-year-old resident of San Antonio, was furloughed and eventually laid off from her job. With four kids that are at home now because of school closures, she’s spent less on transportation costs, like gas, and work-related expenses, like dry cleaning. But she’s seen her grocery bill rise a bit.

“It’s been a little tough, having everybody around all the time. One of my kids has struggled with anxiety quite a bit,” Anna B. said. “And having the lack of routine has been a real struggle because there’s not, now we go to school. Now we do this activity.”

The poll also found that Gen-Xers spent $161 more on utilities than they usually do, while millennials spent $132 more and baby boomers $50 more. All groups spent less money than they usually do on gas and public transit, along with restaurants and takeout, but millennials cut back the least on these categories. They spent $3 less a month on restaurants and takeout, compared to Gen-Xers, who spent $53 less, and baby boomers, who spent $30 less.

“You can’t really dine in in most places, but they were definitely still spending considerably more than other generations on takeout food,” Rossman said.

Why student debt may be slowing down a generation of homeowners