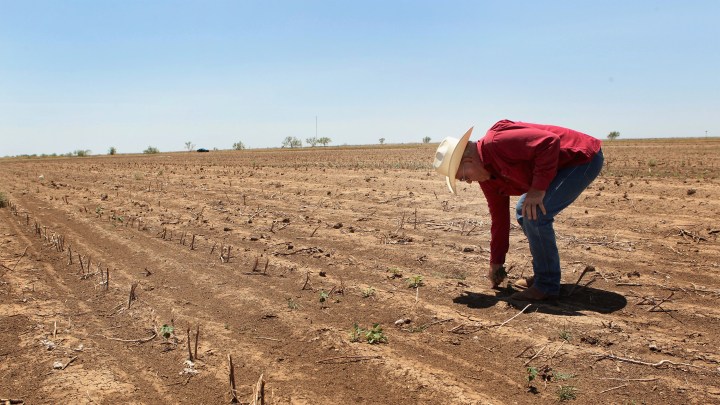 Thomas Duden raises dairy cows on his wife’s family farm, along with his wife and in-laws. Besides the milk they produce, they also sell hay. And last year, just to make ends meet, they started renting farm equipment.

Still, Duden said, “It just seems like the harder I work, the further we get behind.”  The stress of trying to keep the farm afloat plus some other stuff in his personal life pushed him to the edge. He’s not the only one. Over the last few years, the stresses of commodity prices, tariffs, weather and other challenges have taken their toll on farmers’ mental health. Nationally, suicide rates among farmers are one and a half times higher than the general population, according to a 2016 report from the Centers for Disease Control and Prevention, the most recent available.

There are high rates of substance use, too. Now, with mental health care even harder to come by, COVID-19 is adding another one.

Duden said he thought about suicide more than once.

“It crossed my mind staging an accident,” he said. “You’re on the farm, it’d be easy to mask.”

It took him years to finally admit that he needed help. Now he pays for his own therapist and a marriage counselor, which, depending on how often he sees them, can add up to $800 a month.

In Minnesota, farmers do have some access to free mental health care through a unique program from the state agriculture department that funds two therapists. (The state has allocated $250,000 a year to pay for it.)

Monica McConkey is one of them. Farmers and others in the agriculture industry call McConkey for advice and therapy, which can be a one-off or a regular thing. She said it’s mostly the farmer who calls, but that she also gets calls from concerned spouses.

Before COVID-19, McConkey and her colleague spent their days driving around the state to see those farmers and trying to raise awareness about mental health. Since COVID-19, it’s all gone remote.

Thomas Duden said it’s hard to make mental health part of the conversation because it goes against farm culture. Growing up, he said, “we did not have feelings. You were happy or you were sad. That was it.”

COVID-19 is complicating all of this, even though McConkey said when it first started, it barely registered for farmers, who were worried about other things and were already socially distanced.

McConkey said now though, she’s starting to hear more about how COVID-19 is putting a strain on farms. Some farmers have lost jobs they had taken off the farm to help keep the family afloat. Others have been forced to dump milk or kill off pigs and chickens because they can’t get them to market.

Uncertainty is a given in farming, but COVID-19 is taking that uncertainty to a whole other level.

“When there’s no end date and your livelihood and your family’s legacy is at stake, that is incredibly stressful because you have no control over it,” she said.

She said calls dropped off a little in May as farmers focused on spring planting. But she expects them to pick up again soon and then some.