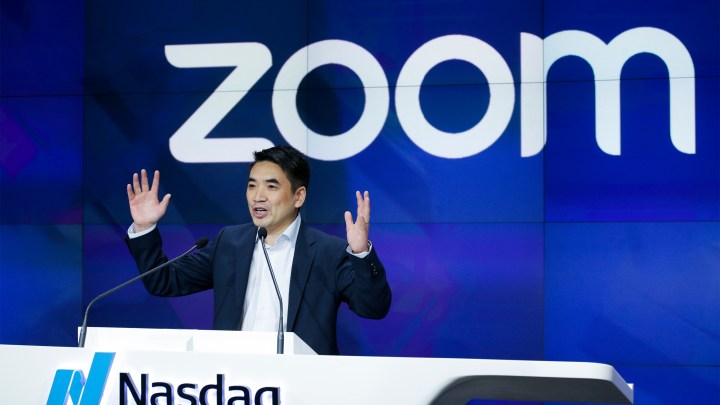 Update, June 12, 2020: Zoom issued a statement late on June 11, excerpted at the bottom of this article.

The videoconferencing giant Zoom suspended the accounts of multiple U.S.-based activists commemorating the Chinese military’s deadly crackdown on student protesters in and around Beijing’s Tiananmen Square in 1989. One account that was shut down had hosted a Zoom meeting attended by some 250 activists, many logging on from China.

Eight days after the Zoom meeting took place on May 31, the account of Humanitarian China, a San Francisco-based nonprofit led by 1989 student protest leader Zhou Fengsuo, was disabled, the group said.

“We are outraged by this act from ZOOM, a U.S company,” a Humanitarian China statement said. “Simultaneous to our censoring, thousands in relation to the Tiananmen Commemoration and Free Hong Kong Movements were silenced within China both online and through in person detainments. The ZOOM accounts of Wang Dan and the Hong Kong Alliance were also shut down.”

“We are outraged by this act from ZOOM, a U.S. company.”

Wang Dan, another student protest leader from 1989, told the Financial Times that he’d organized a separate Zoom call to commemorate Tiananmen, but that Zoom canceled the event twice.

“It’s not an unusual phenomenon to see situations where Chinese activists or democracy advocates run into problems with social media accounts on Chinese-owned platforms, but also on U.S. or other foreign-owned platforms,” Cook said. “Somebody will post something on their account that is deemed to be sensitive in China, and LinkedIn will then send them a message, telling them that their profile is no longer visible to people in China. It’s all kind of complex and often very opaque and nontransparent.”

Late Wednesday, Zoom restored Humanitarian China’s account. Yet Thursday, the company appeared to defend its actions on grounds of following laws in China, where Zoom has users, employees and data servers.

“Like any global company, Zoom must comply with laws in the countries where we operate,” the statement read. “We strive to limit actions taken to those necessary to comply with local law.”

“Like any global company, Zoom must comply with laws in the countries where we operate. We strive to limit actions taken to those necessary to comply with local law. Our platform is increasingly supporting complex, cross-border conversations, for which the compliance with the laws of multiple countries is very difficult. We regret that a few recent meetings with participants both inside and outside of China were negatively impacted and important conversations were disrupted. It is not in Zoom’s power to change the laws of governments opposed to free speech. However, Zoom is committed to modifying its processes to further protect its users from those who wish to stifle their communications. For example, for situations where local authorities block communications for participants within their borders, Zoom is developing additional capabilities that protect these conversations for participants outside of those borders.”

Many analysts who research technology and the internet in China said it remains unclear how or why Zoom tracked and disabled the accounts in question.

“It’s possible that Zoom feels political pressure from China that would lead it to try to stamp out discourse around the world that the Chinese government wouldn’t like,” said Graham Webster, editor of the DigiChina project at Stanford’s Cyber Policy Center. Alternatively, Zoom’s processes intended to flag and censor material inside China could have failed, he said. Many social media and tech giants — including U.S.-based LinkedIn and Chinese apps WeChat and TikTok — try to walk a fine line of controlling content for users inside China while allowing freedom of speech elsewhere.

“A lot of these processes happen at an automated level, or with one employee in a room somewhere who can simply make a mistake,” Webster said. “And it could have been simply a mistake to shut down some of these international discussions, because the learning curve for Zoom may still be pretty steep.”

“It could have simply been a mistake … the learning curve for Zoom may still be pretty steep.”

The episode has brought criticism that Zoom may be helping export Chinese censorship. It comes at a challenging time for a company whose fortunes have soared during the pandemic yet faces stiff challengers in the video-meeting sector.

And Zoom faces a separate challenge: It does not use the most secure “end-to-end encryption” technology to keep meetings private, said Justin Sherman, cyber statecraft fellow at the Atlantic Council think tank.

“It came out several weeks ago that they were not in fact using end-to-end encryption,” Sherman said, “which potentially means that Zoom or other entities could be turning over access to calls or listening in on conversations.”

Given security concerns, many multinational firms have warned employees not to use Zoom, including Daimler, Ericsson, BNP Paribas and Bank of America. Thursday on Twitter, several professors who teach China studies said they plan to avoid Zoom as well.

·         In May and early June, we were notified by the Chinese government about four large, public June 4th commemoration meetings on Zoom that were being publicized on social media, including meeting details. The Chinese government informed us that this activity is illegal in China and demanded that Zoom terminate the meetings and host accounts.

·         We did not provide any user information or meeting content to the Chinese government. We do not have a backdoor that allows someone to enter a meeting without being visible.

·         Zoom does not currently have the ability to remove specific participants from a meeting or block participants from a certain country from joining a meeting. As such, we made the decision to end three of the four meetings and suspended or terminated the host accounts associated with the three meetings.

How We Fell Short

Our response should not have impacted users outside of mainland China. We made two mistakes:

·         We suspended or terminated the host accounts, one in Hong Kong SAR and two in the U.S. We have reinstated these three host accounts.

·         Going forward Zoom will not allow requests from the Chinese government to impact anyone outside of mainland China.

·         Zoom is developing technology over the next several days that will enable us to remove or block at the participant level based on geography.