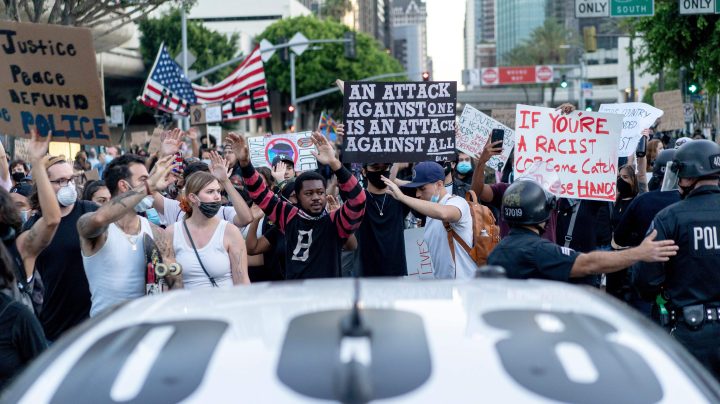 More than 10,000 people have been arrested in recent days at protests over racism and police brutality, according to the AP. (Kyle Grillot/AFP via Getty Images)
Race and Economy

More than 10,000 people have been arrested in recent days at protests over racism and police brutality, according to the AP. (Kyle Grillot/AFP via Getty Images)

Protesters get arrested all the time. No big deal. That’s what D’Angelo Sandidge thought, before it happened to him.

“Like, OK, they’ll hold you for 24 hours and then they’ll release you,” he said. “There’s no lingering effects.”

But for Sandidge, one of thousands of people arrested in recent days at protests around the country over systemic racism, police brutality and the killing of George Floyd, there have been significant lingering effects.

He and his friend were on their way to a protest in downtown Indianapolis in early June, right around curfew, when police officers told them to stop walking. Instead, terrified, they ran. Sandidge was caught and arrested for violating curfew and for resisting arrest by flight.

He was held for more than 24 hours, during which he missed the orientation for his new job.

“When I was locked up, I wasn’t able to communicate with them through that, so it probably looked to them as if maybe I was negligent or maybe I didn’t care,” said Sandidge, 23, who just moved to Indianapolis in February. “I don’t know if they are going to retract the opportunity from me.”

When he was finally released, the police didn’t give him back any of his things — not his wallet with his bank cards and ID, not his phone, not his house keys or car keys. Instead, they kept them as evidence and sent them to the property room.

“I have no access to any of my funds. I am literally homeless and without a car,” he said, days after his arrest. “They have my cell phone as well, so I don’t have any contacts or any resources, anything like that.”

It took about a week for him to finally get his things back. Still, he’s stressed and scared about how much the arrest has already cost him, and what the long-term effects could be.

“There is fallout, and it’s very destructive to what my future is going to be here,” Sandidge said. “I feel targeted. I feel like they purposely targeted my future. And they’re succeeding.”

Nationwide, police have arrested more than 10,000 people at protests over systemic racism and police brutality in recent days, according to a tally by the Associated Press, often for curfew violations and failing to disperse. Many have been charged with disorderly conduct and resisting arrest.

Getting arrested on some of those charges can come with a significant cost; bail, fines, booking fees, attorney’s fees, court fees and other costs can add up quickly.

Though it varies widely case by case, city by city, courtroom by courtroom, “a simple protest can get somebody anywhere between $10,000 to $12,000 just to resolve it favorably, where they walk out having completed community service, and do not leave with anything that permanently is on their record,” said Charles Tucker Jr., managing partner with Tucker Moore Group, LLP in Maryland who is representing a number of protesters pro bono. That figure includes attorney’s fees.

Lawyers across the country who back the protests against racism and police brutality have been offering their services for free, to support protesters and to help reduce some of the financial burden that can come with being arrested. There are also bail funds, many of which have gotten a flood of donations, actively working to get protesters out of jail. And some cities, including Indianapolis and Los Angeles, are now saying they will not prosecute peaceful protestors — those arrested for things like curfew violations or failure to disperse — after significant public outcry. But even for those who are not charged, just having an arrest on their record can have a significant impact on their life.

“People can lose their jobs; they have, for missing days of work while they’re in jail. They can lose their house by an inability to pay because they have to pay a bail, or they can even lose their public housing,” said Derrick Morgan Jr., an attorney at the law firm Saeed & Little, LLP who is also representing protesters pro bono.

“When you look at studies around the long-term financial impacts of being arrested … over a lifetime, the yearly income reductions add up to a sizable amount that can create a major socioeconomic difference just by being arrested for protesting when you were 19.”

That is what D’Angelo Sandidge is most afraid of — what this could mean for his future.

He grew up poor in Gary, Indiana, and had just moved to Indianapolis, hoping to find more opportunities for professional growth. He had finally landed a good job, at a security company, right before his arrest. Now, he’s afraid he’s going to lose it, and that it’s going to be hard to find a new one.

It already felt hard enough, before.

“I am not heterosexual. I’m a big Black man with colored hair, and my hair is not natural, it’s not what companies would consider to be professional, because I have braids. And so it’s difficult to find work in a lot of different avenues,” Sandidge said. “Then coronavirus has been around as well, adding even an extra layer of difficulty, aside from discrimination, for me to be able to find work.”

Now, he has an arrest on his record, for the first time. The prosecutor has filed charges — resisting arrest — and there’s a hearing scheduled for early August.

“Until this case is resolved, it’s going to show on his criminal background check. It’s going to show as pending,” said Hiba Suleman, an attorney with Saeed & Little who is representing Sandidge pro bono. Which could jeopardize his ability to get or keep a job.

The same is true for many of the protesters being arrested for exercising their constitutional rights, Suleman said.

“There certainly is a financial stressor there for a lot of the people who are right now having to choose between kind of a civic duty, protesting against injustice, and their livelihood.”

All of this is making Sandidge feel stressed, confused, angry. He has no idea what’s going to happen next, and no confidence at all in the legal system.

“This is how oppression works. It starts with your voice being silenced, and then you facing consequences that are not always going to be just,” he said. “You always run the risk of being further oppressed when you speak out. Realistically, I feel like damn, had I not gone this wouldn’t have happened. But on a separate aspect, I definitely feel like it was more important than ever.”