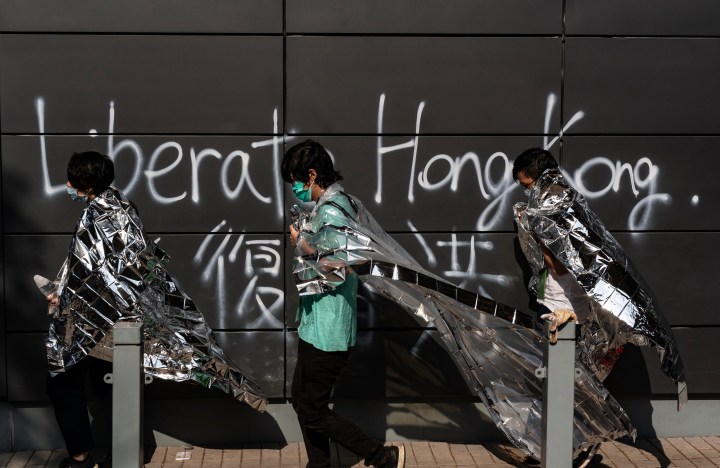 Months of anti-government protests in Hong Kong have pushed the economy into recession.The protesters have five demands, including amnesty for arrested protesters and the establishment of an independent inquiry into the actions of Hong Kong police.

The first demand, the withdrawal of a controversial extradition bill, has already been met. But violent demonstrations continue. Many of the protesters have adopted the motto: “Five demands, not one less.”

Beijing says the violence is being led by extremists and thugs.

Sher, who did not provide her last name because she doesn’t want to be identified, is a student and part-time tutor who regularly takes part in protests. She says that while she has never resorted to violence, she will keep going until the remaining demands are met.

The 26-year-old is also one of many thousands of people in Hong Kong who support activists away from the front line.

“My name is Sher and I’m one of the protesters in Hong Kong. I’m doing my postgraduate degree at Hong Kong University, and I’m 26.

Hong Kong is my hometown. So that’s why I think I should have a say. I have to talk to the government because they can’t do what they want.

I’ve got some students who were forced to just leave their homes by their parents because they’ve got really, really different political views. And so I just let them stay in my place, and I offer them food and WiFi, because they still have to connect to the world.

Of course, I’m scared, but the thing is, if every one of us is scared and we don’t go out so probably we can’t achieve anything, just like the withdrawal of the extradition bill. If we were scared in the first place, there wouldn’t be anything done about that.

This is the second in a series of interviews with people affected by protests around the world. Listen to 19-year-old Iraqi protester Israa Saadi al Jabouri.