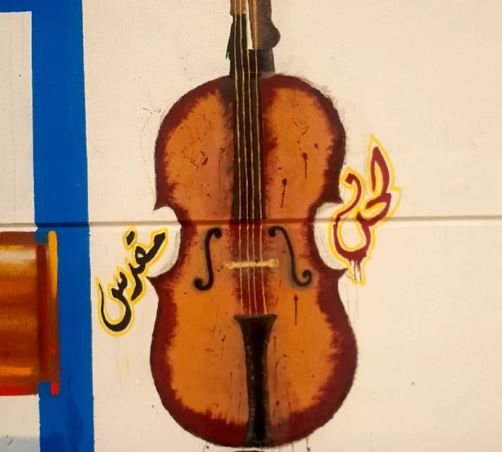 Mass protests have broken out in countries from Hong Kong to Bolivia. They’ve been sparked by different reasons — some protesters are angry about corruption, some want more job opportunities. But they all want a better life.

In the first of a series of global snapshots, we hear from Israa Saadi al Jabouri, an Iraqi student living in the capital Baghdad.

Anti-government protests in Iraq began this October amid high unemployment and anger about corruption and poor public services. Authorities have been trying to exert control through curfews and a near-total internet blackout.

More than 300 people have died since the start of the protests, according to the Iraqi parliament’s human rights committee. Thousands more have been injured.

Artists like Israa are taking to the streets not just to voice their feelings, but to paint them on the bullet-riddled walls of Baghdad.

My name is Israa Saadi al Jabouri. I am 19 years old. I’m studying engineering, and I’m an artist. I love to draw.

Right now life in Iraq is a bit hard because we deserve better than how we are living right now.

Jobs are the most hard thing to find. When we graduate from college after like 16 years of studying and giving our souls into this studying, we have no job. My sister graduated 10 years ago and until now she hasn’t found a job.

And that’s why we are participating in protests because we want a better future. When we stand against them, there is a possibility to have a better life.

We are using art to express ourselves and for the people who have died. I have painted a violin. The strings of the violin are gunshots. It represents the killing they are doing. And the violin represents beauty. They say that we have destroyed everything. But that’s not true. We make everything beautiful. We draw, we love.

We are the generation of the nineties and the 2000s. We have suffered from many things — the bombs, ISIS — so we are not afraid of that.

They might kill us. They might kidnap us. You know, many kidnappings have happened just because people are helping each other.

I have read a quote one day. It says: “Be afraid and do it anyway.”

I’m not afraid and I’m going to do it anyway.