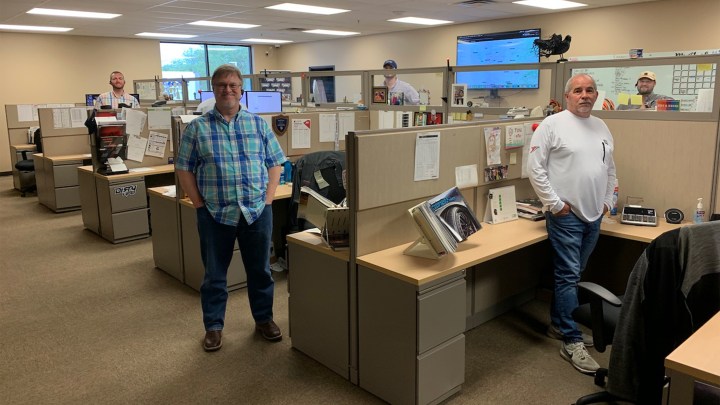 In the Nashville, Tennessee, warehouse of Dunlap & Kyle, forklifts honk their way through the heavy scent of rubber amid 250,000 square feet of consumer and commercial grade tires. But the tire distributor’s outbreak, which began in late March, started in the wood-paneled office of General Manager Adam Waldrup.

He developed cold-like symptoms, got tested and found out he had COVID-19.

“It’s just so hard to figure out the source,” he said. “We have so many people in and out of here. We have traveling salesmen, which at that point we’d brought in. But we deliver tires, so there’s just no telling.”

The corporate office in Batesville, Mississippi, abruptly messaged everyone in Nashville to pack up their stuff, go home and get tested. But it was already too late. Waldrup’s wife, 2-year-old son and mother-in-law fell ill.

And the virus had already infected a majority of the sales team, which sits in a bullpen of cubicles just outside Waldrup’s office, often meeting around his long conference table.

Waldrup points out the employees who tested positive: about a dozen workers, 1 in 6 employees. Waldrup said they’ve had to get comfortable with sharing lots of otherwise private health information.

At first, no one else was showing symptoms, even those who tested positive for the coronavirus.

“I didn’t notice for the first couple days,” said Tyler Smallwood, who is the IT manager for the office. “It wasn’t until I used some hand sanitizer and it had no smell. I was like, that doesn’t seem right.’”

Most had mild cases, but the oldest — the sales manager — came down with the worst symptoms. Frank Harvey said he left the office on that Thursday afternoon worried about the business and hitting his numbers.

Then, when his temperature spiked and sent him to TriStar Hendersonville Medical Center, he went into survival mode.

“You’ve got all the factors going against you. You’re just a tad bit overweight, and you’re past 60,” he said. “So it’s pretty scary.”

Harvey recovered. So did his colleagues and their households. And now they’re back at it, mostly focused on selling tires but trying to be more diligent about infection control than before.

They’re still not wearing masks, but they have them handy. And a clerical employee is tasked with taking everyone’s temperature in the morning when they arrive.

All these new protocols have had companies turning to the National Federation of Independent Business for guidance.

“The new reality is setting in, and it’s tiring,” said Elizabeth Milito, senior counsel for the NFIB.

The NFIB is receiving basic but complicated inquiries: Whom do you have take temperatures? Or do you even really want to go that far if it’s not required? And how private can you even be at this point about everyone’s personal health?

The business group has been offering guidance to all kinds of companies, from warehouses to nail salons. Milito said everyone she’s working with is eager and optimistic, telling her “we’re just going to try to make lemonade out of lemons and get back to work,” she said.

Dunlap & Kyle is trying to put its experience with COVID-19 to good use. Employees who’ve recovered are getting time off to donate plasma as often as possible. The plasma is being used around the world to help the sickest COVID-19 patients in hospitals.

Meanwhile, the company has become more comfortable making its experience public. Managers were nervous when they first told customers they were dealing with an outbreak. But the tire shops they work with stuck with them, said salesman Ty Cordray.

“Since we’ve come back, we’ve been busier than we’ve ever been,” he said. “We think it’s because we were honest and upfront.”

Somehow, May was the best month the company has ever had, with business up by 30%. And June is projected to be even better.

How COVID-19 is affecting one small-town doctor