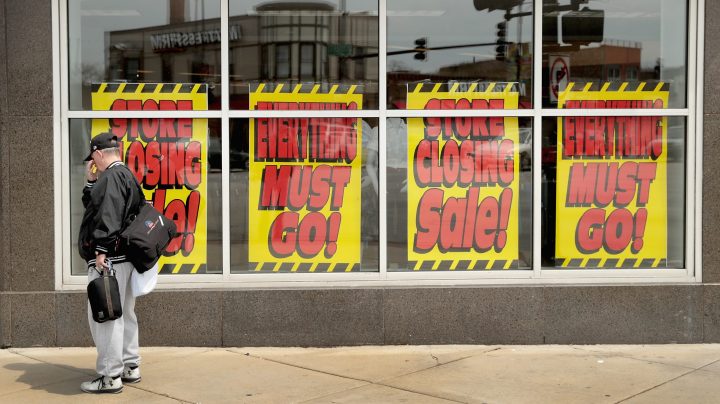 You know the kind of bankruptcy where a company sells all its stuff and closes its doors forever? That’s not generally how a Chapter 11 bankruptcy is supposed to go.

When a company files for Chapter 11, it’s trying to come up with a plan to save the business. For a retailer, that usually means closing unprofitable stores, cutting staff and getting some of its debt forgiven.

“So when you come out, you’re a leaner and meaner company than when you went in,” said Larry Katz, a business bankruptcy lawyer at Hirschler Fleischer.

The thing is, if you do emerge from a Chapter 11 bankruptcy, “you still need to have a product that people are interested in purchasing,” he said. “You still need customers, and you still need a marketing plan that makes sense.”

The customer part is not looking good right now, at all.

Retail sales numbers fell by more than 16% in April. For clothing retailers, they were down by 79%.

That doesn’t exactly bode well for the clothing companies — like J.Crew and Neiman Marcus — that are filing for Chapter 11 bankruptcy and hoping to come out the other side.

Now, those numbers are from April, when the country was on full lockdown. So the drop in sales is not surprising and probably not long term, said Craig Rowley, senior client partner for retail consulting at Korn Ferry.

“It’s hard to make any sales when your stores aren’t open,” he said. “The real question will be: how fast does revenue come back, as stores are beginning to open up? Are consumers ready to get out? Do they feel safe? Until that’s done, they aren’t going to go shopping.”

Also, how much has the world changed now?

“Are more people going to work at home?” asked Randy Allen, a senior lecturer of management and strategy at Cornell University. “That’s going to have an impact particularly on apparel, the kinds of apparel, who the customers are, the frequency with which people are going to buy, etc.”

There’s a lot we don’t know. But she says the retailers that do succeed will have to figure out what kind of clothing people want to buy now.