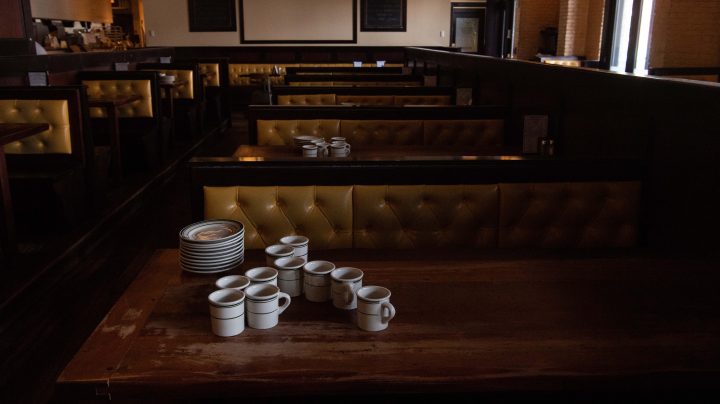 COPY
A closed restaurant in Washington, D.C., in March. Auction companies are predicting a wave of closures and liquidations due to the COVID-19 pandemic. Nicholas Kamm/AFP via Getty Images
COVID-19

A closed restaurant in Washington, D.C., in March. Auction companies are predicting a wave of closures and liquidations due to the COVID-19 pandemic. Nicholas Kamm/AFP via Getty Images
Listen Now

Some businesses simply won’t survive the losses from the pandemic lockdown — despite trillions of dollars in aid — and will be forced to liquidate.

Often, that requires the help of local auctioneers.

The industry’s a leading indicator of economic trouble; auctioneers know earlier than most when small businesses like restaurants are struggling, and some are predicting a wave of closures and liquidations as a result of the pandemic.

“They just can’t survive this,” said BJ Jennings, president of Jennings Auction Group in Pennsylvania. “[After] being shut for two months, how much longer will it be — and then trying to restart their businesses? It’s going to be a very, very difficult situation.”

Like many in the auction industry, Jennings has shifted in recent years from the live, fast-talking bidding wars people often think of with auctions. Instead, she hosts many liquidation auctions online.

Jennings’ auction company is temporarily closed as a “nonessential” business in Pennsylvania, but auctions are still happening. And she predicts a spike in the coming months.

“I expect that once we’re able to start conducting business, once the courts reopen to start filing for bankruptcy, we’re going to start seeing an awful lot of filings that are going to be for [business] liquidations,” Jennings said.

And the auction companies that have shifted their operations online will have the advantage. Some, like mid-Atlantic company Rasmus Auctions, post video tours of restaurants it is liquidating and schedule visits and pickups to maintain social distancing.

CEO Christopher Rasmus said his work tapered off early in the lockdown, when restaurants and other small businesses were unsure how long the pandemic would last and what the economic fallout might be.

“I think as this epidemic has matured,” Rasmus said. “It’s becoming clear to people what the future might look like, where back in early March there was no idea what it would look like.”

And for many, the future doesn’t look so good. Rasmus said in the last week or two, he’s been getting more calls from people who had business that were successful pre-COVID-19. And the conversations often start the same way.

“The preamble is kind of ‘I never thought I would be making this phone call, but I’m going to need to consider liquidating my business,'” he said.

Auction companies tend to be leading indicators of economic hard times, according to John Schultz with the National Auctioneers Association, who also works for Grafe Auction in Minnesota. Schultz is currently talking about liquidation with a local bakery — a fixture of his community.

“These are conversations that are bittersweet, right?” he said. “When these iconic restaurants and bakeries and food service places where we commune as people call you and say, you know, ‘I can’t do this anymore,’ it really pulls on your heartstrings, right?”

He’s grateful for the business opportunity, but he said it also creates something of a “mutual grieving process with the owner of that business and you,” in which Schultz said he tries to help the owners move on and start the next chapter of their lives after their business has failed.

If many restaurants do indeed end up reaching a breaking point around the same time, that would likely result in lower prices of professional-grade restaurant equipment that often gets snapped up at auctions.

But for those who are in position to buy, said Pennsylvania auctioneer Jennings, “They will be able to take advantage of an opportunity to buy good replacement used equipment and furnishings.”

Eric Heidenberger is a partner in DC Restaurant Group, which owns 11 restaurants and bars in Washington, D.C., and in Delaware. He’s optimistic he’ll be able to reopen so long as the lockdown doesn’t stretch too much longer, and he’s scoping out some of the online auctions for restaurant equipment and furniture coming up.

“There’s always repairs that need to be done in a restaurant,” he said. “There’s tables and chairs that might be weathered. There’s refrigerators. There’s kitchen equipment.”

Heidenberger acknowledges it’s awkward to potentially benefit, albeit indirectly, from other restaurants failing, but said he’ll do what he can to “weather this storm,” with the hope his business will survive, and maybe even come out stronger.