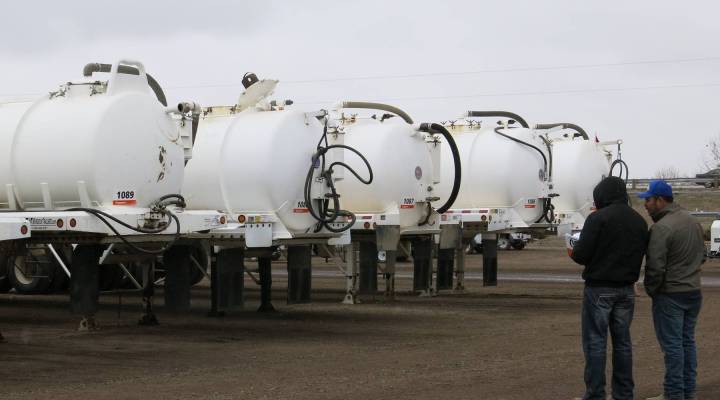 On a recent auction day, the outside of Ritchie Bros. auctioneers north of Denver was transformed from a giant parking lot full of equipment to a beehive of activity. Thousands of people had traveled from across the country  to test out everything from cranes to excavators—some of it coming straight from the oil fields.

“There’s no doubt that the oil and gas downturn has positively affected our business,” Rob Giroux, Ritchie Bros. Vice President,  said. The company bills itself as the world’s largest industrial auctioneer with dozens of auction houses including Denver.

Giroux watched the bidding from the back of the massive auction theater. When a bid was launched, its number popped up onto a large computer screen — like the one for a yellow machine on four wheels with a big arm on the front.

Potential buyers check out oil and gas equipment being auctioned at Ritchie Bros. Auctioneers in Denver on March 17, 2016.

“You’ll see telescopic forklifts — for example what we’re selling right now — a lot of these have come from the oil and gas market. But it’s not limited to that market,” Giroux said.

Buyers will pay anything from a few thousand dollars to more than $100,000 for used equipment. The auction house makes a commission off of sales, and Giroux said the uptick started in 2015. At this Denver location during the two-day auction there were 3,950 items for sale—a new record. The previous record was 2,500.

“We’re still seeing a significant amount of oil and gas related equipment. You just need to look out in our yard here,” Giroux said.

Outside, there was a sea of orange, yellow and blue industrial-sized trucks, steam rollers and cranes, including some items from outside the oil and gas industry like shipping containers and street sweepers.

Excavators for auction at Ritchie Bros. Auctioneers in Denver on March 17, 2016. The two-day auction had more than 3,950 items for sale–a new volume record for the location.

Angel Salazar was studying a row of cylindrical tank trailers. He had come from New Mexico to check out the auction, and was looking for equipment to add to his drilling business, which had struggled over the last year. He’d even had to lay off workers. So he needed a bargain.

Nearby Rich Millard from North Dakota investigated portable tanks used during the fracking process. He called the large auction “tragic” for the oil industry. But he did think the oil business would recover. Which was why he was there. He recently launched a company that disposes oil-field waste in an environmentally friendly way.

“We’re building the business, and we’re preparing for the next upswing in the oil industry,” Millard said.

Angel Salazar also had hope that the next upswing was around the corner. But with more than four decades in the oil business, he said now is a pivotal moment. If you bought stuff, would you actually be able to put it to work and recoup your expenses?

That’s a Catch-22 many businesses are facing right now.

“I can see a little light at the end of the tunnel,” Salazar said. “People are calling back and they want to do things. Hopefully we’ll get back going here in another two to three months.”

But there’s going to be more pain before it’s all over. Continued low oil prices are expected to prompt more bankruptcies across the industry. It all adds up to more reasons why the auction business won’t be slowing down any time soon.