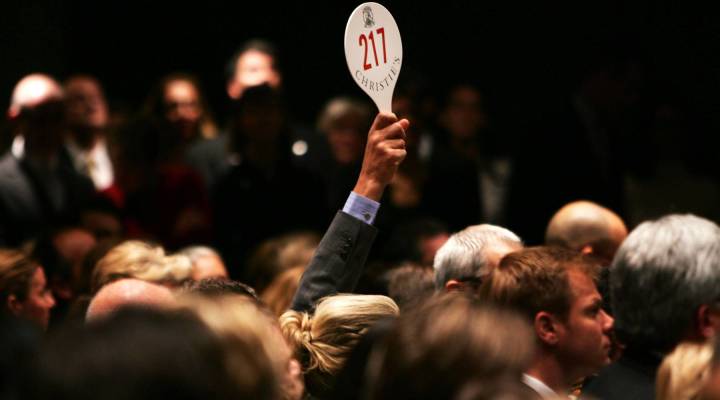 It could be one of the biggest auctions of all time. Today, Christie’s began selling a vast collection of art and valuables belonging to the Peggy and David Rockefeller estate. The auction takes place online from now until May 8, then next week the live auctions kick off and last for a few days.

All told, the sales are expected to raise at least $500 million, though some are saying that could go as high as a billion. And all the proceeds will be used for philanthropy. The excitement at Christie’s is palpable — an estate sale like this one is rare. It includes many hundreds of items, including paintings, jewelry, furniture, and porcelain.

Ahead of the auction, Christie’s porcelain specialist Becky MacGuire showed off a gilt-edged dinner service with intricately drawn figures shown in a garden or country landscape. It was made in China in the early 19th century. The Rockefellers collected it piece by piece for many years. But they didn’t just display it – they ate off it.

“Peggy and David … really used and loved” the service, MacGuire said. She added that it’s unusual even to see individual pieces of this design at auction.

Upstairs, Christie’s Americas Chairman Marc Porter walks over to a painting that hung in the Rockefellers’ living room for 60 years. He describes it as “extraordinary.” The painting is a Matisse from 1923. In it, a model reclines on a couch, half-naked. The mood is sensual.

“A Matisse of this quality, scale and perfection of image hasn’t been on the market in four decades,” Porter said.

He added that Christie’s is expecting this work to sell for $70 million, and possibly a lot more. A Picasso in the sale is expected to fetch $100 million.

Sarah Douglas is editor-in-chief of Art News Magazine. She said the allure of this auction isn’t just the exceptional quality of the art. It’s where it came from. Take several of the Picassos, once owned by writer Gertrude Stein.

“She was close with Picasso, got it directly from Picasso,” said Douglas. “So you’re talking about not just an extremely pristine provenance, but let’s say a star-studded provenance.”

Duck decoys that were part of the Rockefellers’ collection.

To drum up interest in the sale the auction house has toured parts of the collection within the U.S. and in Europe, Hong Kong, Beijing and Shanghai. Last year Asia became the second-largest market for art sales, behind the U.S.

“So I think people will be watching China in particular for who’s going to be buying these really, really major pieces,” Douglas said.

Though we may never know their names, as buyers often remain anonymous.

Betsy Bickar is an art advisor at Citi Private Bank. She said some of her clients will be bidding at the auction. Buyers have waited years for an opportunity like this.

“It’s the kind of sale that it’s going to be fun just to watch as theater alone,” she said.

She said wealthy individuals will be vying for the Matisses and Monets, not arts institutions.

“I think if a museum were to acquire one of these works it would be with the help of a benefactor,” Bickar said. “So you know, museums certainly don’t have acquisitions budgets that large.”

Not that you need a vast budget for everything in the collection. Some of the family items are small and personal, with a nod to the Rockefellers’ luxurious lifestyle.

Marc Porter displays a pair of David Rockefeller’s gold cuff links, which he said could go for at least $400. They’re designed with a martini glass at the center – the liquid in each glass is represented by an aquamarine.

For a buyer, they’re a window into one of America’s wealthiest families, and a glimpse at a gilded past.