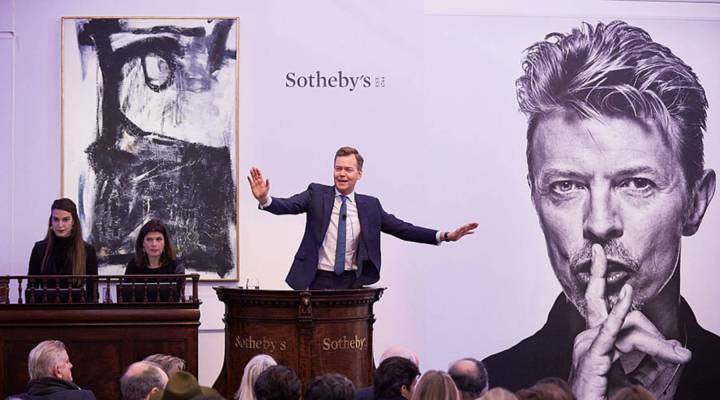 As a public school teacher in New York City, Richard Andino isn’t making boatloads of money. But that doesn’t stop him from attending celebrity auctions.

At a Park Avenue sale last month, he dropped five grand on a gold watch once owned by the mid-century jazz legend Art Tatum, known as one of the greatest piano players of all time.

“It’s something that belonged to my idol,” Andino said. “So it’s worth it.”

Andino, who’s 53 and plays piano himself, has been obsessed with Tatum since he was a teenager. That’s why he’s willing to pay up.

Celebrity auctions are a global business, raking in millions of dollars a year. They got their start in 1970 with a sale focusing on the golden age of Hollywood. MGM, the studio that brought us classic films like the “Wizard of Oz” and “Singin’ in the Rain,” had run into some financial trouble.

“The kind of bean counters had come in, and they wanted to raise money, wanted to get rid of things, so they sold something like seven sound stages worth of stuff,” said Leo Braudy, who teaches English at the University of Southern California and wrote a book on the history of fame.

The costumes and props, which included Dorothy’s iconic ruby red slippers, sold for $1.5 million to an auctioneer. One news report said he flipped them for eight times that. The celebrity auction was born.

It got another bump in the late ’70s, when a London-based rock n’ roll themed restaurant called the Hard Rock Cafe started lining its walls with guitars played by the likes of Pete Townshend and Eric Clapton.

“It made people aware that there was in fact a market for this type of memorabilia, whereas you know it was a well-kept secret before that,” said Giles Moon, consignment director of entertainment and music memorabilia at Heritage Auctions.

The business has gotten even bigger since then, as the internet has made it possible for people to bid online, from anywhere, Moon said.

“It’s really blown the market out globally, so there’s a lot of interest from all over the world,” he said.

Heritage has sold some weird stuff over the years. A lock of David Bowie’s hair. Elvis’s empty pill bottles. Moon says a lot of buyers are looking for a connection to a star. Others just want the bragging rights.