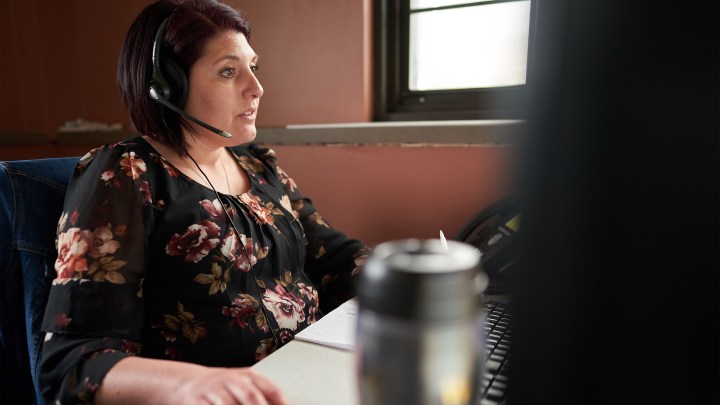 COPY
A worker at a call center. Many companies are trying to satisfy customer demand with online solutions. Geoff Robins/AFP via Getty Images
COVID-19

A worker at a call center. Many companies are trying to satisfy customer demand with online solutions. Geoff Robins/AFP via Getty Images
Listen Now

If you’ve been trying to file for unemployment benefits, claim an airline refund or hunt down a lost package, chances are you’ve called a customer-service line once, twice — maybe 15 times. You’ve also probably listened to a lot of hold music.

On the other end of that music is a customer-service rep with a line of callers that never lets up.

“We power through it,” laughed Daphne Cervantes, a customer-service rep at Freshly, a meal-subscription service.

Most of the calls are about shipping delays. But every once in a while, someone has a question that isn’t in her handbook.

“One time a customer called in because they wanted a picture of the mask,” she said, meaning the mask employees wear when they prepare food. She couldn’t get a photo because she’s now working from home in Phoenix.

Cervantes said the customer was nice about it. People have been pretty friendly in general — chatty, even. “They’re not afraid to go into detail,” she said.

But getting through calls quickly is more important now that companies are dealing with a surge. At Expedia, call volume is seven times higher than usual. Vrbo, a vacation-rental site, has hired an extra 250 people to work the phones. And people have been tweeting about being on hold with banks for hours.

All this while customer-service employees are working from home. As Verizon’s executive vice president and chief human resources officer, Christy Pambianchi oversees crisis-response protocols. The company has employees in the U.S., Europe and Asia. “Right now, every country is responding differently to coronavirus, and within the United States every state is responding differently,” she said.

There’s a lot to coordinate, like equipment and internet security, because calls can involve credit cards and Social Security numbers that need to be protected.

Many companies are discouraging customers from calling at all. Most have online chat boxes, and some let you request a callback so you don’t have to sit on hold.

If none of this works, customers often go to Instagram, Facebook and Twitter to vent. “If you think of the businesses you can’t fathom life without, it’s typically because of a human relationship and an emotional connection made,” said John DiJulius, who owns the DiJulius Group, which does customer-service consulting for brands like Marriott, Nordstrom and Starbucks.

In a crisis, the quality of customer service can have a lasting impact, and refunds or cancellation policies might not be enough to keep people happy. Customers want to get a real person when they call, and less of that hold music.