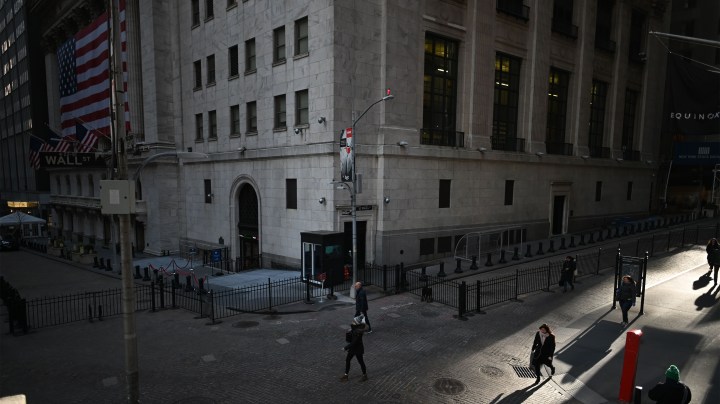 COPY
Corporate debt has been attractive to investors over the past decade. Johannes Eisele//AFP via Getty Images
COVID-19

Corporate debt has been attractive to investors over the past decade. Johannes Eisele//AFP via Getty Images
Listen Now

The Federal Reserve’s rescue program includes support for the corporate debt market. Fed Chair Jerome Powell has mentioned his concern about corporate debt levels in the past. The Fed announced Thursday that it is expanding its support to “backstop” a wider range of business lending.

Corporate debt ranges from safe investment-grade debt to risky high-yield bonds. Chuck Tomes, a portfolio manager at Manulife Investment Management, said any way you slice it, over the last 10 years corporations have been borrowing a lot of money.

“It’s the most that it’s ever been on a historical basis,” Tomes said. All that corporate debt has been attractive to investors, pension funds, insurance companies, mutual funds and exchange-traded funds. And with negative interest rates in Europe and Japan, Tomes said, foreign investors have been looking around for other places to park their money.

“They’re finding it in, in a lot of cases, the U.S. corporate bond market,” he said.

Now that the Fed is widening its support for corporate debt, some companies already have taken to borrowing more, according to Marquette University professor Matteo Arena.

“We’re seeing a lot of companies in the last week going out and issuing large amounts of debt, at very low rates, and for many companies it’s very close to zero percent,” Arena said.

There’s already $5.4 trillion worth of investment-grade corporate debt out there, said Collin Martin, fixed-income strategist for the Schwab Center for Financial Research.

That might sound scary, but he says for stronger sectors, like financial companies, more borrowing can be a positive.

“The fact that corporations can issue this debt to kind of serve as a bridge to get them through [the economic slowdown caused by the pandemic] should be good for the longer-term health for a lot of corporations,” Martin said. The risk, he added, falls on heavily indebted companies in sectors that are getting hammered, such as tourism, energy and department stores.

“Those companies are going to see a significant negative hit to their cash flows,” Martin said. “It’s going to be tough to service those debts.”

The Fed said it plans on purchasing some riskier assets, but Martin says that doesn’t mean the Fed can keep companies out of default.