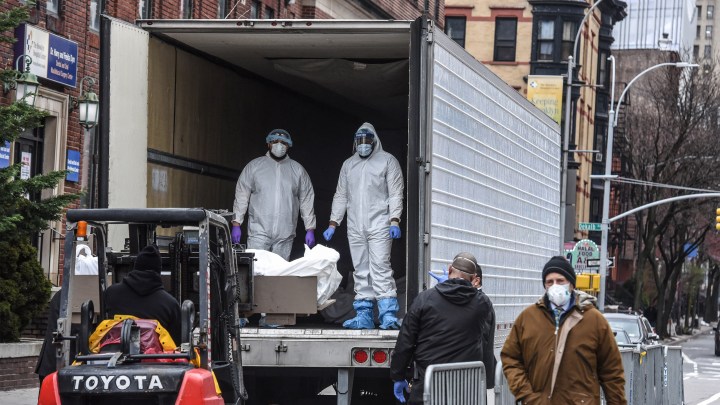 COPY
Due to a surge in deaths caused by the Coronavirus, hospitals are using refrigerator trucks as makeshift morgues. Above, medical workers remove a body from a refrigerator truck outside of the Brooklyn Hospital on March 31. Stephanie Keith/Getty Images
COVID-19

Due to a surge in deaths caused by the Coronavirus, hospitals are using refrigerator trucks as makeshift morgues. Above, medical workers remove a body from a refrigerator truck outside of the Brooklyn Hospital on March 31. Stephanie Keith/Getty Images
Listen Now

Constantine Choharis’ funeral took place today in Massachusetts. His son Peter, in Maryland, couldn’t visit him when he was dying — he couldn’t travel. And Peter won’t be at the funeral either. Neither will his sister, who’s immuno-compromised. “I’m hoping someone will hold up a phone and I’ll be able to do FaceTime or something at the grave,” he said.

Daniel Kantor, a Unitarian minister in Texas who recently lost his father, wrote about the lack of human contact while his family mourns, quoting C.S. Lewis: “No one ever told me that grief felt so like fear.”

Kantor has not yet been able to have a funeral for his father. He says the grief of personal loss is compounded by the grief of everything we’ve lost in the world around us: our office mates, our routine, our face-to-face contact with friends.

Hugs. Crying in someone’s arms. Having loved ones all in the same place. The things that can make funerals cathartic aren’t possible when large gatherings are banned and we have to stay six feet apart.

Some funeral homes and places of worship have been adapting. Some are live-streaming services.

“Some cemeteries allow you to go to the grave and stand there, 10 feet away from the grave,” said Keith Taylor, who owns a funeral home in Nyack, New York. “Then you have other cemeteries that say the family can’t get out of the cars.”

“You have no idea what it’s like. We’re just inundated with calls. I’ve had to turn families down,” he said. “I can’t keep up with the amount of people passing away from it. It’s started to get to me, to be quite honest with you. When you keep going to the same nursing home … I never seen anything like this in my life.”

Flower said that just like hospitals, funeral homes are struggling to get equipment to protect workers. “I can’t get masks,” he said. “I can’t get personal protection equipment.”

Peter Choharis said he feels lucky his father will get a funeral at all, even if he doesn’t get to attend. His gift to his dad will be maintaining social distancing.

Choharis said his dad was in the Navy, treating the wounded in World War II.

He would have understood.