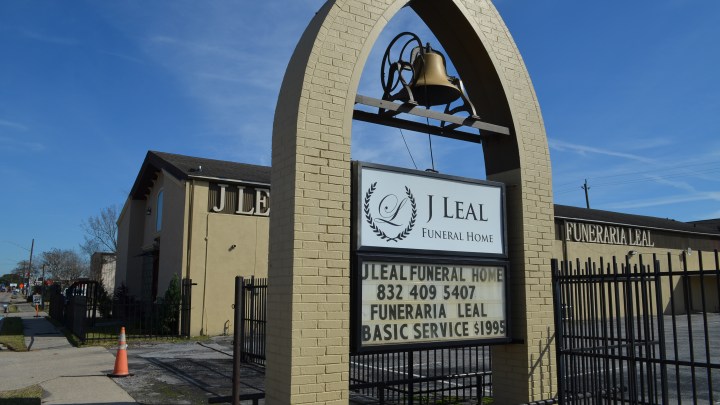 Economically, this has boosted the funeral industry, but it has also put heavy demands on funeral workers.

In the early days of the pandemic, many funeral homes lost revenue as demand dropped for some of their services.

During that time, Manuel Guerra was laid off from his job as a funeral director in Houston.

“When the corona first came out, a lot of families and a lot of funeral homes were doing only cremations,” he said. “And maybe just have a memorial service, you know, with just a few people present, but not the body present.”

But Guerra didn’t have to wait long for a new job as infections and deaths surged in the summer. He is now the funeral director at one of four branches of another Houston company, Leal Funeral Home. And the job has kept him busier than ever.

“We had almost 39 funerals in one week,” Guerra said. “That’s what some funeral homes do in one month.”

Having worked in the funeral industry for 40 years, Guerra is used to seeing death. But this has been different.

“We had a wife — young — that died in the beginning of one month. And four weeks later, her husband died,” he said. “It’s just sad. It’s tragic.”

Guerra said he himself has lost four family members to COVID-19.

In addition to more burials, funeral homes have had to do more to help overburdened hospitals and medical examiners.

“All those things that we normally handle, those have all been challenged and exacerbated,” said Harvey Hilderbran, executive director of the Texas Funeral Directors Association.

Many funeral companies are also making more money during the pandemic. Houston-based national funeral giant Service Corp. International reported recently that it brought in $280 million more revenue in 2020 than in the previous year. The company pointed out “significant challenges,” though, and thanked front-line workers for continuing to focus on “the importance of the safety of our client families, communities, and colleagues.”

At Leal Funeral Home, Manuel Guerra said he hopes the vaccine will start to make a difference.

“And I pray,” he said, “that the cure is around the corner.”

He is a step closer to getting that protection. Guerra recently received his first shot of the COVID-19 vaccine.