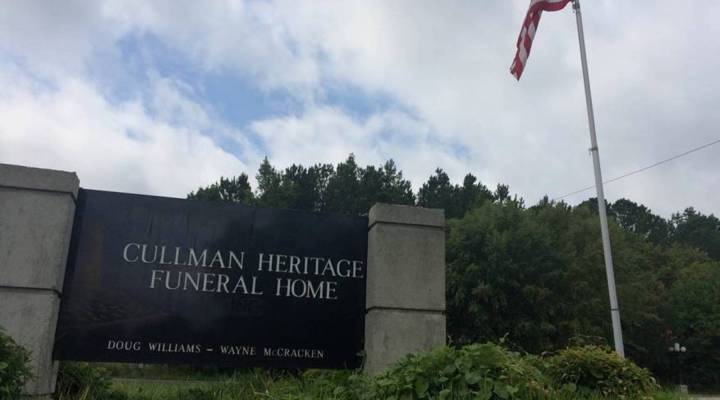 On a somewhat morbid note: As long as people are dying, there’s no shortage of jobs —  in the funeral business. There were more than 25,000 jobs in the funeral industry in 2015, according to the Bureau of Labor Statistics projects. That number is expected to grow about as fast as other occupations. The challenge many funeral home directors face is finding new people to get into the business, even in Alabama, which has the nation’s second-highest concentration of jobs in the industry.

Fun funeral-home fact: When part of someone’s face is missing, and that person needs to look good, as in a casket, wax is your friend. Here in Restorative Art class, students are using clay, a cheaper substitute.

This class is part of the small mortuary services program at Jefferson State Community College in Birmingham. To get an associate degree in funeral services, there are classes in embalming, biology and management. Students in Restorative Art rebuild faces on mannequin heads.

Only five of the 30 students in the class have family in the funeral business. It’s odd, given that staying in the family business was how most people, historically, got into the industry.

Before he made the leap, 26-year-old Kyle Burgess had to get over a few things. He lives above the funeral home where he’s an apprentice in Anniston, about an hour from Birmingham.

“So it used to be like touching a dead body was weird,” he said. “It was just cold and gave you the heebie-jeebies almost? But now it doesn’t anymore. Like that’s part of my job.”

Eventually he wants to become a funeral director, like Doug Williams, who owns two funeral homes in Cullman, Alabama. A tour reveals caskets, an urn display, and then this:

“It’s like a big bread oven. It’s a big, heavy, fire brick oven inside so it retains that heat pretty much,” Williams said.

That big oven is where workers cremate bodies. Alabama, by the way, has one of the lowest cremation rates in the nation, compared with burials. Nevertheless, it’s 107 degrees in this room, still hot from a cremation the night before.

Williams said it’s hard to find young people these days who want to work with the deceased, especially ones that aren’t lured by shows like “Six Feet Under” and “CSI.” Out of his own five children, Williams said, he’s lucky if one gets into the business.

The Alabama Funeral Directors Association is recruiting at high schools. And state mortuary schools are looking for students. The association also just launched an Under 40 Funeral Directors Group, which other states have started in recent years. They network at conferences, do karaoke, go bowling.

Ellen Wynn McBrayer, funeral director at Jones Wynn Funeral Homes and Crematory in Georgia, is in the under 40 group.

McBrayer, a third-generation funeral home director, said that, not surprisingly, for younger people, death is even less on the radar.

“For someone that didn’t grow up in funeral service to think about helping others in something we don’t even want to talk about planning for ourselves, it seems like it would be hard,” she said.

As a child, she got used to celebrating her birthday on another day and postponing holiday festivities because of a funeral her parents had to run. Back then, she said she’d never get into the business. But eventually, she realized it was a chance to help families during tough times. Her brother, however, still won’t have anything to do with the family business.