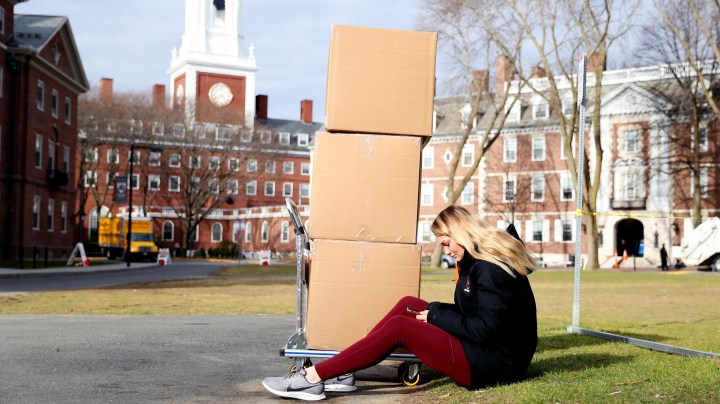 When news broke that Harvard was shutting down in-person classes for the rest of the semester, international students had to figure out how they would stay on campus or depart. Maddie Meyer/Getty Images
COVID-19

When news broke that Harvard was shutting down in-person classes for the rest of the semester, international students had to figure out how they would stay on campus or depart. Maddie Meyer/Getty Images

Five days. That’s all the time Woojin Lim, a sophomore at Harvard University, and his thousands of international classmates had to pack up, store their belongings and get on planes home after the school announced Tuesday, March, 10 that it would be requiring students to leave campus over fears of the COVID-19 outbreak.

Since then, hundreds of schools have followed suit, mandating that nearly all students complete studies for the semester in remote locations in order to minimize the spread of an outbreak that has now infected more than 4,200 people and killed at least 75 people in the United States, according to the Centers for Disease Control and Prevention. Harvard has had two “presumptive positive” tests for the disease as of Monday.

“We heard that [other universities] were doing classes online, and so we were somewhat expecting to have online classes after the spring break,” Lim said. “But we did not expect for them to just evict us completely.”

Other schools are also trying to be flexible and responsive in accommodating students, with concerns for learning and public health at the forefront of the conversation. At the University of Akron in Ohio, most of the international students on campus have chosen to remain in the area, with online classes starting March 30 after a mandatory three-week break.

At the University of Rochester, the university is assuring international students that taking more than one online class because of these extenuating circumstances will not affect their full-time enrollment status.

And the University of California, Davis, actually recommends that students stay local while taking their online classes, as “traveling outside the U.S. carries risks and uncertainty we cannot control.”

Still, many here have had their living, working and studying situations upended by the coronavirus.

Lim was born in South Korea and now lives in Vancouver, British Columbia — he travels to both places when he’s not studying at the Cambridge, Massachusetts, campus of Harvard. He had plans to take an internship in journalism this summer in Washington, D.C., along with hopes of a backpacking trip in Italy — the former of which is uncertain, the latter of which is almost surely canceled.

“I was certainly not expecting to go back to Vancouver at this time. This is just so suddenly happening,” Lim said.

Harvard and its student government have organized $200 subsidies for storage and shipping, which students on financial aid can apply for and get credited to their accounts. For travel, all students receiving financial aid are eligible for reimbursement of travel costs, and students with a $0 parent contribution may be reimbursed up to $750.

Lim, however, believes this assistance did not come early enough in all of the chaos of the campus departures announcement.

“They were kind of silent on financial aid, until kind of the day after,” he said. “It took them a few days to sort this out, and, for students on financial aid, for undocumented students, for students without a home to go back to — I think for those students, it would have been a lot more of a relief for Harvard to immediately tell us alongside that email that they would be providing financial subsidies.”

Harvard did not respond to a request for comment on this by the time of publish.

Many of Lim’s Chinese, Japanese and Korean friends at Harvard say they would rather return to their home countries, which have so far been more effective at containing the virus under aggressive quarantine and testing measures.

“They’re saying it might actually be better for them to go back,” he said. “Because the situation is kind of getting under more control, and the health care — for instance, in Korea, at least, we have free health care, and there are a lot of great medical resources attached. Whereas, for internationals, especially here, we do have a student plan, but we don’t rely on that too much.”

Some of Lim’s European classmates reacted in a similar manner — as soon as they heard about a U.S. travel ban on European countries, they immediately booked flights back to their families and friends, not wanting to get stuck in the U.S. This despite time differences between the U.S. and European nations that could make online participation in classes at odd hours of the day difficult.

One Harvard student who won’t be leaving campus, at least not yet, is Awnit Marta, a senior engineering student from the United Kingdom. He is living in the U.S. on an Optional Practical Training (OPT) visa, which enables him to stay in the country after graduating in order to pursue work related to his field.

He filed a petition with the university to stay as soon as he found out students would be forced to leave — he didn’t want to risk losing his visa status, and he also has a senior thesis to complete by the end of spring break. (Marta has since learned there’s a chance he would not lose his visa status by leaving the country, and the engineering department is being flexible about how students complete thesis projects).

“When I first applied for that position, I was very sure I wouldn’t get it,” he said. “Some people had been telling me, like the Harvard administration, that most likely I won’t get it unless I’m from a Level 3 country or unless I have extreme extenuating circumstances. I was mentally preparing myself to leave.”

To his surprise, Marta has been granted permission to remain in his room until Wednesday, March 18, at which point Harvard will reevaluate where and how it will accommodate students remaining on campus. Dining services is now serving food to students in the dining halls, to avoid everyone touching the same serving utensils, and it’s also individually wrapping items like bread and non-peelable fruits.

Marta is among the international students worried about how the Trump administration is handling outbreak response, but he has faith in the local Harvard administration and Massachusetts government.

He says he’s been in touch with his family frequently, and they want him home. But, for now, Marta thinks staying put is the best option. He’s got a job lined up in New York come September — when he’ll unpack most of the belongings he’s shipping away to a friend’s house in New Jersey for now.

“I’ve been talking a lot to my mom, and she definitely wants me to be home, because she’d rather I be in front of her rather than like 1,000 miles away, which totally makes sense,” he said. “I think my reasons for staying make sense to her, though. That having a space here and kind of like isolating myself from my own family right now is not too bad of an idea.

“If, in a few weeks, the situation changes, I will reevaluate.”