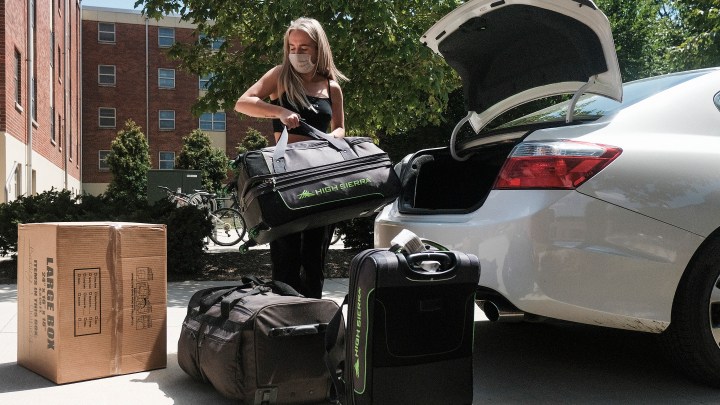 COPY
Incoming students began moving onto the Ohio State campus on Aug. 13 on a staggered schedule to prevent the spread of COVID-19. Matthew Hatcher/Getty Images
COVID-19

Incoming students began moving onto the Ohio State campus on Aug. 13 on a staggered schedule to prevent the spread of COVID-19. Matthew Hatcher/Getty Images
Listen Now

The start of a new academic year during a pandemic has been introducing a lot of new things to the country’s college campuses — virtual lectures, socially distanced Greek rush and COVID-19 liability waivers. In some cases, students are signing whether they want to or not.

Before she could start her classes at the University of Alabama, law student Haley Czarneck had to watch an online COVID-19 informational video. Halfway through, a document popped up for her to sign. It read that she agreed to wear a mask on campus.

“But there was one little sentence — or not even a full sentence, half a sentence — buried sort of at the end of the first paragraph that said, ‘I voluntarily assume such risk,'” Czarneck said.

Essentially that means, “no matter what the University of Alabama did, no matter how many precautions they took, you could get very sick or die,” she said.

Czarneck and others refused to sign that waiver. The university ended up changing the language.

Before starting a semester, students have to sign off on all kinds of stuff — dorm policies, a liability release for the gym, academic rules of conduct. Christopher Marsicano of the College Crisis Initiative at Davidson College said now they’re having to sign COVID-19 waivers, too.

The waivers are “trying to add additional restrictions and sort of provide them with an understanding that college may shut down and go all online, and that if students get sick, then it’s not necessarily the college’s fault,” Marsicano said.

“They don’t have to spend as much money taking precautions against COVID-19,” Feldman said.

For example, schools wouldn’t have to buy new HVAC systems for every building on campus. After all, “engineering solutions are more expensive than hand sanitizer and masks,” Feldman said.

But it’s not clear that any of these waivers would stand up in court.

Alex Bloom, director of research at educational consulting company EAB, said contracts go both ways. Schools would have to show that they had completed all their COVID-19 preparations the way they said they were going to.

“I think it will be very easy for a student who is trying to be held to this waiver to say, ‘But you said you were going to do X, and you did not,'” Bloom said.

But for now, students may not have a choice whether or not to agree to their schools’ terms. The University of Pittsburgh calls its liability waiver a “community compact.” Law student Julie Daw didn’t sign it for two weeks. But then, as the first day of her remote classes neared, she did agree to the compact.

Schools are hoping that’s enough to persuade students to sign on the dotted line.