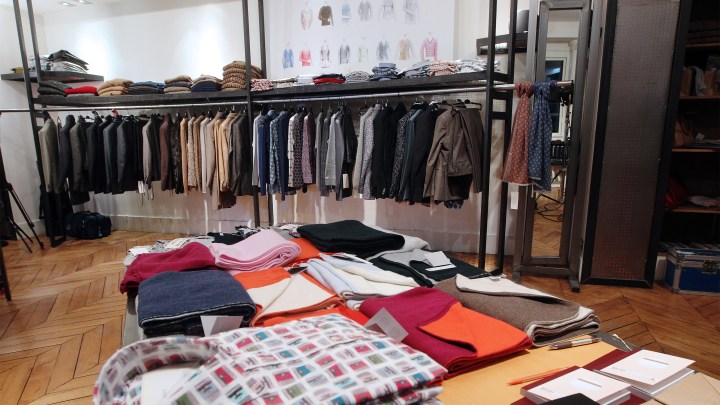 COPY
Small businesses rely on foot traffic, which is noticeably down during the coronavirus pandemic. Pierre Verdy/AFP via Getty Images
COVID-19

Small businesses rely on foot traffic, which is noticeably down during the coronavirus pandemic. Pierre Verdy/AFP via Getty Images
Listen Now

It’s a little before noon Thursday at Rothmans, an upscale menswear shop that sells suits, casual wear, and offers custom tailoring. The store’s been open for a couple hours, and things have been quiet.

“There’s really no foot traffic,” said co-owner Ken Giddon. “We’ve had a couple of appointments that came in, but we’re in a spot here where we can really watch Union Square. As I’m standing here, there’s literally nobody walking down the streets,” Giddon said.

The dropoff in foot traffic is a clear sign that the coronavirus is starting to affect the real economy. Businesses are seeing a drop in foot traffic as people stay at home. Cities, states and the federal government have started to announce plans to help small businesses keep their doors open.

Rothmans has been cutting back on orders to make sure it doesn’t have too much inventory. Ken’s brother, co-owner Jim Giddon, said they’re also reaching out to customers they know who might want to buy something. Still, he said it’s a careful balancing act.

“You have to be respectful of the customers, because they’re all going through the same thing we’re going through,” Jim Giddon said.

About an hour later, a couple of shoppers had trickled in, but traffic wasn’t much better. At one point, Jim Giddon and another employee tried ordering more hand sanitizer, without avail.

That’s our number one priority now, to try and find supplies to keep our customers healthy, and keep us healthy,” Jim Giddon said.

By 1:30 p.m., store traffic still hadn’t improved. Ken Giddon says revenue is down roughly 60% to 80% compared to this time a year ago.

Rothmans has been around for decades, and has withstood other disasters, such as Hurricane Sandy and the Sept. 11 attacks. But the uncertainty of coronavirus right now has him concerned for his 28 employees.

“What do you do when the decision is do you go out of business or try and pay your employees,” Ken Giddon said. “We’re not there, but if this thing lasts four months, we’ll be there. This week, New York City announced zero-interest loans for small businesses seeing big drops in revenue. Ken Giddon has already applied.