It’s been called the “graveyard shift,” the “third shift,” and the “night shift.” Whichever label you want to use, working overnight involves tough hours and unseen labor. In this series, we’re highlighting the night shift workers who keep the 24/7 economy running.

Lonnie Golden — an economics professor at Penn State University, Abington College — said that about 5% of employees across the U.S. worked the night shift in 2010, according to the General Social Survey. In 2018, that figure inched up to 7%. (Note: the percentage of night shift workers in the country will vary across studies.)

“One of the reasons [for that] might be that we are growing in some of the industries that have more 24/7 operations, like retail, restaurants, food service and transportation,” Golden said.

And once you have a robust 24-hour operation in place, that can beget other 24-hour businesses. Along with catering to travelers, businesses near the airport are also providing services to workers with irregular schedules.

“If shifts extend later and/or start earlier at the airport and [airport-related] jobs, the cafes and stores nearby will find it profitable to staff more people earlier and later in the day,” Golden said.

We spoke to some of the night shift workers who help run that 24/7 economy, focusing on LAX and the surrounding area.

As thousands enter and leave LAX each day, Verner is one of the workers responsible for cleaning up the floors and the restrooms.

Like many other night shift workers, he’s found it can be difficult to find time to hang out with friends and family.

“Sometimes I’m just way too tired; my body just doesn’t want to stay up. It’s just hard. Around maybe, like, 12, my eyes get heavy,” Verner says. “So that’s the only downfall, but other than that, I mean, it’s good because it keeps me busy.”

Plus, he gets to avoid big crowds.

These pros and cons are why he’s been weighing the decision to continue working night shifts.

As a traffic controller, getting asked to do the night shift comes with the territory.

“You just kind of get scheduled on a job,” Santiago says. “It’s just something you gotta do if you wanna put food on the table.”

While he’s not permanently on night shifts, Santiago has currently been working the overnight from about 9 p.m. to 7 a.m. at LAX for the privately owned company Traffic Management.

He says his job consists of setting up traffic control devices — and trying to stay warm. While Santiago has kids, the shift hasn’t disrupted his family life too much.

Like many parents who work normal hours, he still gets to see them in the morning and later in the day — he just happens to return from work in the morning.

Walls works from midnight to 8:30 a.m. at Ralph’s, stocking shelves and making price changes under the glare of grocery store lighting. She used to work the dayshift until the company changed her hours about three months ago.

Adjusting to her new sleep schedule has been “pretty hard.” She has invested in night shades to block out the sun and tries to stay up as long as possible after her shift is over.

“I usually go to bed about maybe 2 or 3 in the evening, and sleep until about 11 or so,” Walls says. But she said she likes the shift, and said there are certain benefits to working overnight.

“I don’t deal with the public a whole lot,” Walls says. “And management — they’re not here.”

One incorrect assumption people make about night shift workers? “That we sleep all day,” she says, laughing. “But, I mean, we still have things that we have to take care of.”

“I could be home asleep right now,” Guillen says, ringing up a customer at Circle K.

It’s past midnight., and while Guillen technically stopped working the night shift full-time months ago, he jumps into the fray when the company needs him.

“I’m the only one who gets called in for favors like that. Nobody else is willing to do it,” he says. “I mean, I don’t really mind it. But a heads-up would be real nice.”

However, by working the night shift, Guillen said he’s been able to hone his observational skills.

“I learned a lot, like how to read people in a certain way when they enter the store. Because graveyard, you’re alone. So you have to, you know, really keep an eye out on the store,” Guillen says. “But the good thing about this area is it’s really secure.”

Ortiz, a mother of three (including a six-month-old), says she prefers the night shift because she can spend more time with her family.

“I get them ready for school, take them [and] pick them up,” she says.

As Ortiz talks and stocks the Starbucks counter with fresh water and snacks, a customer passes by and greets her. She says that’s one of the best aspects of working the night shift: getting to know the regulars who stop by.

“I actually make connections to the point where they know about my kids,” Ortiz says. “You meet a lot of great people. It’s a different vibe from the morning rush. Like in the mornings, they’re a little bit more cranky, which is understandable. You know, I am myself. And then at night time, they’re all chill.”

However, working the night shift can pose obstacles when you need to take time off.

“Let’s say you called because you’re sick or something happens. It’s really hard to get covered,” Ortiz says.

And while this Starbucks typically operates 24/7, it’s soon going to close at midnight and reopen at 2:30 a.m. That means Ortiz — who normally works from 8 p.m. to 4 a.m. — is going to have to readjust to a new schedule, working fewer hours.

“I see my schedule for like the next two weeks, and they cut my hours by at least 10 hours. So that’s a lot,” she says.

“This is my crew right now, this is the night crew,” Canton says, gesturing to several other workers behind the counter at McDonald’s. “And then there’s the morning crew.”

Canton can get frustrated because sometimes it feels like that “morning crew” gets more acknowledgement for their work.

“It’s almost like we get no credit for the store right now,” he says.

On days with limited staffing, Canton does a two-man job, taking orders and getting drinks all by himself. And when employees start trickling in later during his shift, they expect him to be at his 100%.

“But I just worked an eight-hour shift,” he says.

Canton works as a McDonald’s cashier from 8 p.m. to 4 a.m., and has been with the company for about six months now. Despite some of the challenges he faces, Canton says he actually had been looking for a job at night because he isn’t a fan of the morning and never has been.

Canton says his goal is to eventually become a pilot — either in the air force or for a commercial airline. Maybe he’ll pass through LAX. 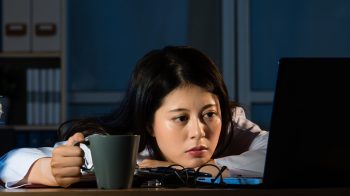 Do you work the night shift? Tell us about it.

The Night Shift
Tags in this Story
Share this Story