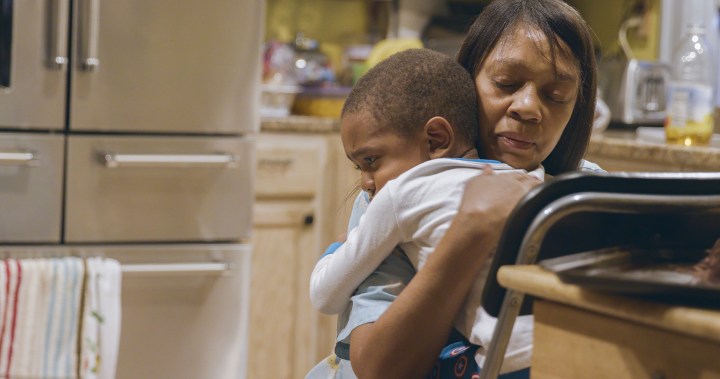 A new documentary, "Through the Night," explores the realities of nighttime child care and the families who rely on it. Courtesy Long Shot Factory
Listen Now

What happens to the children of the workers who power America’s overnight economy — from nurses to transit employees to custodians — when there’s no one home at night to take care of them? For many families, the answer is 24-hour child care facilities like Dee’s Tots Childcare in New Rochelle, New York, which is run by Deloris “Nunu” Hogan and her husband Patrick (“Pop Pop”) out of their home.

“Sometimes [Deloris] gets to bed at 2 a.m. Sometimes she gets to bed at 4 a.m.” said Loira Limbal, the director and producer of “Through the Night,” a new documentary that follows the daycare and the families who depend on it.

“Their sleep schedule is a bit all over the place, just like the parents’ work schedules are. And it means that they don’t get enough sleep. Which is part of what I really wanted to highlight: that we’re at a point in the United States where our economy treats sleep as a luxury that only the lucky few can get,” she said.

Limbal, who is the senior vice president for programs at Firelight Media, a nonprofit supporting documentary filmmakers of color, spoke with Marketplace’s David Brancaccio about the experiences of overnight caregivers and the kinds of conversations she hopes the film will spur. The following is an edited transcript of their conversation.

Deloris “Nunu” Hogan:  I go to bed around two o’clock in the morning. Sometimes I go to bed at four. We take turns, and [Patrick] lets me sleep. But sometimes it’s like, maybe we better stop doing this. And then a parent will call on the phone, and they’ll go, “I’m going through this, and I’m going through that, and I lost my mom or I have nobody to watch my baby.” That’ll hit me in my heart, or hit him in his heart.

David Brancaccio: How does a human being actually pull off this work? It’s just so difficult.

Loira Limbal: It’s incredibly difficult. And I think the short answer, and really the only answer, is you pull it off at an enormous price. It requires incredible sacrifice.

Brancaccio: When do Dolores and Patrick Hogan, masters of delivering child care, as we see — when do they sleep?

Limbal:  Well, they have a very haphazard sleep schedule. You heard Deloris say it in the clip that you played: Sometimes she gets to bed at 2 a.m. Sometimes she gets to bed at 4 a.m. It depends what’s going on; it depends if there was a last-minute change in the shift of one of her parents; if there’s a snowstorm; if there’s traffic. There are so many variables when you are providing this kind of critical care for working families. Their sleep schedule is a bit all over the place, just like the parents’ work schedules are. And it means that they don’t get enough sleep. They really don’t. Which is part of what I really wanted to highlight: that we’re at a point in the United States where our economy treats sleep as a luxury that only the lucky few can get.

The families who rely on overnight childcare

Brancaccio:  And you also see that with the parents who have the children in the daycare facilities. Some of them are working night shifts, sometimes it’s the swing shift, sometimes it’s multiple jobs.

Marisol Valencia:  I’m very tired. If I’m not working in one job, I’m working another job. I’m always working and working, just non-stop. I want to have one job so that I can spend time with my kids, have a house — that’s my goal. But it’s very hard with my kids because I don’t get out until like 11 o’clock or 12 o’clock [at night]. If I didn’t to have Nunu, I don’t know what I would do.

Brancaccio: Ms. Limbal, this is not just a portrait of the economics of a daycare facility. This is also where we are in America with our work lives.

Limbal: Absolutely. You hear Marisol say that she’s working three jobs when we first meet her. And she’s working those three jobs because none of her employers would agree to give her full-time hours because they didn’t want to have to pay for benefits, health insurance and other things like that. And so she had to patch together three different jobs in order to be able to provide. They live in Westchester County, New York; the cost of living is rather high. And you can imagine the decision to take on a third job, which just meant that her schedule was insane.

Brancaccio: So there you have a central part of the conundrum: the daycare facility might want to hire on more people so the people who run it can get more sleep; there would be more employees. But that costs money, and that would mean the daycare facility would have to raise the price it charges the parent. But when you meet a parent like Ms. Valencia there, she can’t pay more.

Limbal: Exactly. It’s a tight rope that working parents, particularly the working poor or the working class, have to walk in the United States to just live. You know, we’re not talking about people wanting to do anything beyond the basics — a roof over your head, food, clothing, education for your children. And somehow we have ended up in a place in the United States where it is this difficult. People are caught between a rock and a hard place. In order to afford care, sometimes they have to take on more work, which then forces them to be away from home longer hours. And so it’s this never-ending cycle that is, in my opinion, very violent and very brutal, and we are not having enough honest conversations about it in the United States.

How the pandemic impacted caregivers

Brancaccio: And your filming was before the pandemic, right?

Limbal: This is before the pandemic.

Brancaccio: So imagine daycare places trying to recruit workers now, with workers shortages and the prices of getting extra labor in rising.

Limbal: Right. And also, to take a step back, something like 60% of daycares in the United States closed due to the pandemic. Daycare providers, and specifically home-based daycare providers like Deloris and Patrick, who we meet in the film — they operate on very, very thin margins, which means that they just simply don’t have the bandwidth to withstand even small crises, much less something as catastrophic as the pandemic has been. And so many of those daycares are not coming back. They are not reopening. And the ones that did had to jump through all sorts of hoops in order to keep their doors open. Deloris and Patrick basically ran through their savings and their retirement funds in order to keep the doors open and keep their staff employed, because their staff is like family to them and they didn’t want to lay people off. And so they’ve had to make really tough decisions, themselves. So there’s the people that had to close; there’s the people that stayed open that now are going to have these long-term effects that they may or may not be able to recover from.

Brancaccio: One of the issues that emerges for me is the sustainability of an enterprise like this. Deloris and Patrick are clearly extraordinary, I would say they are heroic. But that is not something people can do forever and ever, and replacing these two particular people would be very difficult. I mean, I guess the question is: what kind of system is it that depends on heroes being heroic nearly 24 hours a day?

Limbal: It’s a violent, brutal system, in my opinion. That’s the kind of system that requires — or, rather, demands — that kind of sacrifice from individual people.

Deloris “Nunu” Hogan: This work is hard. I don’t want to stop doing what I’m doing because I feel like if I lay down, I’m so tired, I might not get back up. I have to keep on moving because I have something to do.

Limbal:  It’s funny that you say that because we filmed with them during all sorts of hours of the day. Sometimes we were there for very long stretches of time, and I’m talking about early morning, nighttime, summertime, winter, holidays, Thanksgiving, Christmas, first day of school — all the seasons and different moments of their lives. And I’m a parent myself, I have two young children, and they were in loving daycare facilities. But, I have to say, I don’t think I’d ever seen an environment that functioned as seamlessly. There was this way where there was a rhythm and this sort of multi-directional caregiving. So we are talking about Nunu and Patrick as the caregivers, but the parents also look out for Nunu and Patrick, and they look out for each other’s children. The children look out for each other, and that’s not just the older ones taking care of the younger ones, sometimes the younger ones are taking care of the older ones. There is a real beauty in the way that care becomes this kind of communal project in that space — which I think is indicative of the ways in which low-income folks of color survive in this country. I was raised in a low-income — I grew up in the South Bronx with a working mother; my mother worked nights as well. And these are the networks of care that we have always had to create in order to survive really harsh conditions.

Brancaccio: Who watched you when she was working late?

Limbal: A hodgepodge, you know: neighbors, aunts, friends of friends. When my mother was raising me, she didn’t know of anything like Nunu’s service, you know, this is 30-plus years ago. But she also had to start leaving me alone at a really young age. Which was an impossible choice, which many parents, especially essential workers, have had to make in this pandemic. When schools were closed, when daycares were shut, and they had to absolutely show up for work — guess what? You have young kids staying home alone. You have a young kid taking care of an even younger kid. This is what we’re doing to working families and to working people in the United States. And we have been for a really long time, pre-pandemic.

Correction (Dec. 29, 2021): Dee’s Tots Childcare was incorrectly named in a previous version of this story. The text has been corrected.

"Through the Night"Econ Extra Credit with David BrancaccioEEC: Documentary Studies
Tags in this Story
Share this Story