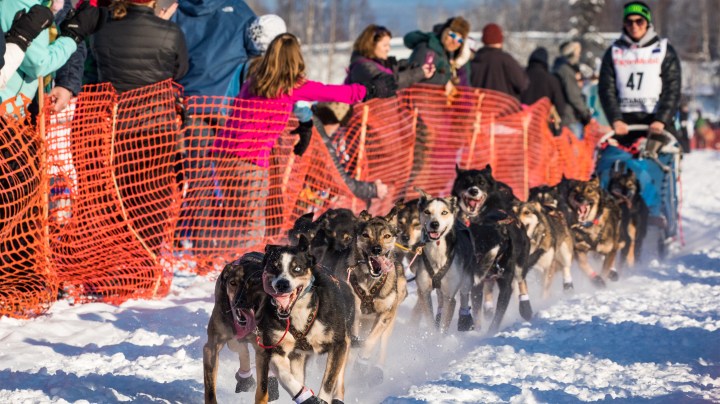 The annual Iditarod is a 1,000-mile sled dog race in Alaska. Iditarod.com/Julie Schroder

The annual Iditarod is a 1,000-mile sled dog race in Alaska. Iditarod.com/Julie Schroder

The 48th annual Iditarod race begins Saturday morning in Anchorage, Alaska. The “Last Great Race on Earth” is a roughly 1,000-mile sled dog race — and it isn’t cheap for organizers or participants.

“It’s incredibly expensive,” said Blair Braverman, who ran her first Iditarod last year. “I think most estimates for running the Iditarod are that it costs between $50,000 and $100,000 for that year.”

Braverman works as a freelance writer in addition to running her dogsled team with her husband, Quince Mountain, in Wisconsin. Mountain is running his rookie Iditarod this year, which has a $4,000 entry fee.

The couple was lucky, Braverman said, in that they took over a team from a musher who was retiring. They received sleds, an all-terrain vehicle, the dogs — basically the whole operation. And she can’t imagine running it alone, financially or in terms of physical labor.

“Right now, we have two people and 21 dogs, and we’re both just all in,” she said. “Our whole lives are shaped around them.”

Kristy and Anna Berington also run a joint operation, Seeing Double Sled Dogs. The sisters, who are identical twins, have been racing for about a decade and have each run around 50 races. Both are racing in the Iditarod this year — Kristy’s 11th time and Anna’s ninth. Anna said a lot of the time, the prize money won usually ends up covering the entry fee, “but it sure is nice to walk away from a race with money in your pocket.”

The race costs $3.5 million to organize each year, according to the Iditarod Trail Committee, funded by a mixture of sponsorship, entry fees, and donations from supporters and fans.

“[Sponsors], along with our dedicated fanbase that donates to the race each year, help us fulfill our commitment to promoting excellence in dog care with a continued focus on putting together the safest race possible for our canine athletes and mushers,” the committee said in an email to Marketplace.

The Iditarod has recently had some trouble with longtime sponsors pulling out. In 2017, following pressure from animal rights organization PETA, Wells Fargo pulled its sponsorship. Alaska Airlines also recently announced an end to a 40-year sponsorship of the race. The Iditarod Trail Committee says that a number of dedicated partners continue to support the race.

Mushers have also come under attack by PETA. The Berington sisters said the organization has gone after their personal sponsors in an attempt to scare them off. Braverman said PETA “is the only one making real money off this sport.”

The Beringtons and Braverman rely on sponsors and fan support to help finance their mushing. Both Kristy and Anna work summer jobs in landscaping and carpentry projects.

Seeing Double has 41 dogs now, and each dog costs about $2,000 annually. The Beringtons calculate that the Iditarod costs them $21,800 to run. They’re as frugal as they can be, getting salmon and meat donations from people in their area. Braverman also gets meat donations from her local butcher and taxidermist. Mushers tend to rely on donations from friends and family, whether it’s money or hand warmers or batteries.

“It’s a communal effort from people, and that extends to our patrons,” Braverman said. She and her husband have a Patreon where fans can make recurring donations. “There’s just so many people putting in a little bit or a lot or what they can [and] are showing up to make these amazing things happen.”

The race certainly isn’t lucrative. But that’s not why these mushers tackle freezing conditions with their dogs.

“Nobody likes to be tired and cold and hungry and broke,” Anna said. It’s an “amazing experience” to have with the dogs, she continued, because they have so much mutual love and it’s “an epic adventure together.”

This adventure could change in the coming years because of climate change. The race has never been canceled, but it has been rerouted due to melting sea ice and fluctuating temperatures in recent years. Hot summers affect training, too, the Beringtons said. They’ve had to travel to find snow to keep training, even living in Knik, Alaska. But these mushers see their sport lasting.

“I don’t know what the sport will look like in 50 or 100 years,” Braverman said. “But I hope and I believe that there will always be people finding a way to do this sport. No matter how expensive it is, no matter how warm it is on the planet, there’s going to be a way.”