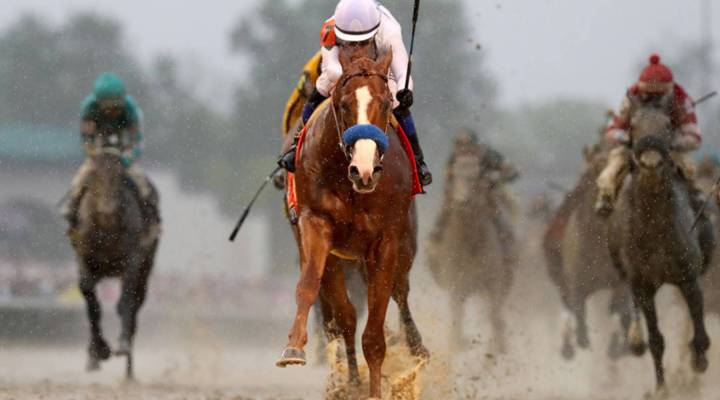 Justify, ridden by jockey Mike Smith, crosses the finish line to win the 144th running of the Kentucky Derby at Churchill Downs on May 5, 2018, in Louisville, Kentucky. Rob Carr/Getty Images
By The Numbers

Justify, ridden by jockey Mike Smith, crosses the finish line to win the 144th running of the Kentucky Derby at Churchill Downs on May 5, 2018, in Louisville, Kentucky. Rob Carr/Getty Images

The first event of the Triple Crown of Thoroughbred Racing, the Kentucky Derby is one of the most prestigious horse races in the world. Over the next month, the two other Triple Crown races, the Preakness Stakes and the Belmont Stakes, will be held in Baltimore, Maryland and Elmont, New York.

Founded by Meriwether Lewis Clark Jr. after Clark visited the Epsom Derby in England and the similar races in France, the Kentucky Derby has been running since May of 1875. While you decide if you’ll don a bow tie or a fascinator on Saturday, let’s do the numbers on the Kentucky Derby.

General admission tickets for the Kentucky Derby start at $60 during pre-sale and rise to $80 the day of the event. Similar to other highly publicized sporting events, “full experience packages” are also available, like the Churchill Downs’ Finish Line Suites, which cost $7,499 to book. By comparison, tickets cost 50 cents in 1938.

2015 holds the record for the highest number of attendees, with 170,513 people in attendance. A-listers in attendance have included the British royal family, Kim Kardashian, Tom Brady and Michael Jordan.

The race is commonly referred to as the Run for the Roses — a nickname derived from the tradition of draping a garland full of roses over the winning thoroughbred. The tradition started in 1896, and by 1904, the rose became the official flower of the Derby. How many roses are in the winner’s garland? More than 400.

But wait, there’s more. The Derby is one of the 34 races taking place during Churchill Down’s 2019 spring meet, which started on April 27 and runs to June 29. The races, cumulatively, are worth more than $30 million in prize money.

In the days leading up to the Kentucky Derby, 1.5 million people gather at Louisville’s Kentucky Derby Festival. According to the festival website, the two-week long event generates more than $127 million every year for the local economy.

The race, held on the first Saturday in May, is about 1.25 miles (about 2 kilometers) and is considered by some to be the “most exciting two minutes in sports.” Only 20 horses run in the Kentucky Derby every year.

For the first time in 14 years, the race’s purse increases this year — by $1 million — bringing the total earnings for Kentucky Derby races to a guaranteed $3 million. The winner of this year’s race will gallop away with $1.86 million, while the runner-up will be awarded $600,000 and the jockey in third place will earn $300,000.

The Kentucky Derby trophy itself is estimated to be worth $200,000.

A longtime Southern favorite, the traditional drink of the Kentucky Derby is the mint julep, a tasty concoction of — you guessed it — mint, Kentucky Bourbon and simple syrup. Approximately 127,000 mint juleps are served over the two days of Kentucky Oaks and Kentucky Derby, which requires about 10,000 bottles of bourbon, 2,250 pounds of fresh mint and 475,000 pounds of ice.

Last year’s winner, Justify, was the 13th Triple Crown winner in history, the second in 37 years, and was retired in June due to a “bad ankle.” The thoroughbred was sold to Coolmore America, a breeder, for $60 million. His trainer, Bob Baffert, has won five Kentucky Derby championships and as of Wednesday, “has the three top contenders in the 2019 Kentucky Derby.”

Correction (May 2, 2019): A previous version of this story misstated the first year of the Kentucky Derby. The text has been corrected.

A look at the most gambling-addicted states