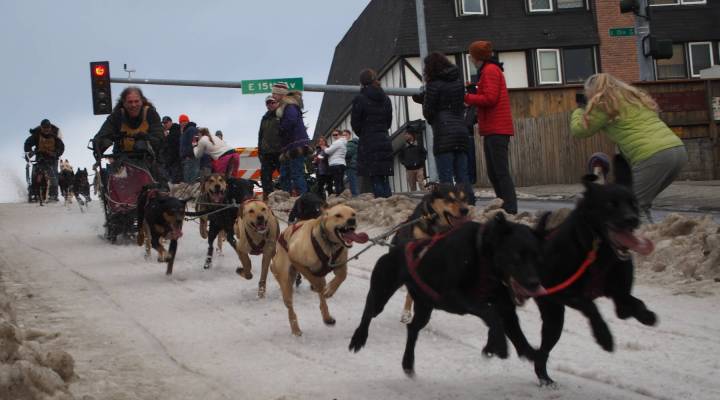 COPY
Mushers in the Fur Rondy sprint race barrel down a hill in downtown Anchorage ahead of the official start of the race, part of a week of festivities leading up to the Iditarod. Zachariah Hughes, Alaska Public Media

Mushers in the Fur Rondy sprint race barrel down a hill in downtown Anchorage ahead of the official start of the race, part of a week of festivities leading up to the Iditarod. Zachariah Hughes, Alaska Public Media
Listen Now

Alaska’s high profile sled-dog race is underway.  Iditarod mushers are driving their teams to Nome. But a controversial rule-change is casting a shadow over the event. Some are accusing race organizers of siding with corporate sponsors by placing a so-called gag-order on mushers competing in the event. But even critics say that without those sponsor dollars, there might be no race at all.

Wearing a bright neon snow-suit, Iditarod veteran Monica Zappa has a huge campaign poster in front of her string of sled-dogs. For years, she’s been outspoken on issues like an anti-mining campaign near a large fishery.  Zappa describes herself as a, “strong proponent of the environment and social issues.”

It makes her a bit of an exception in a sport marked by solitude and stoicism. But according to Zappa, people have liked that she brings politics into an event that has a lot of social and historical resonance for Alaskans.

“I’ve gotten a lot of positive support for that,” she said as her dogs barked behind her. “A lot of people are really happy that I am outspoken on my political issues.”

Not everyone, though. A change in the Iditarod’s official rules within the last year says  mushers aren’t allowed to make personal statements that are “injurious…to the best interests of the race” until 45 days after they cross the finish line.

And that includes statements disparaging the race’s sponsors—among them mining and energy companies.

The question crackling across dog lots and social media is whether the race’s governing body put the rule on the books to legitimize mushing as a sport, or to keep key sponsors happy by protecting them from criticism. “I think in some ways they’re not dissimilar,” said Iditarod Trail Committee CEO Stan Hooley, who’s been in charge of the organization for 23 years.

Dogs get ready to run through three miles of downtown Anchorage during the ceremonial start to the Iditarod.

Hooley said the role of sponsors as essential. They foot the bill for 50 percent of all expenses. They cover everything from internet in remote checkpoints, to a race purse that this year will pay out between $750,000-800,000 depending on how many mushers finish. Hooley believes that cash is necessary incentive to keep top-tier competitors coming back, and that the personal conduct proposal came from mushers themselves. “This is something we’ve talked about for at least 10 years,” he added.

But four-time winner of the race Lance Mackey thinks the rule is a way to keep mushers from trash-talking one-another and organizers, asking for a level of professionalism that feels out of line with the sport’s character.

“I’ve been known to, so to speak, put my foot in my mouth,” Mackey said ahead of the race. “But I never apologize for what I say ‘cause I meant what I say when I said it.”

Others think the rule is about a controversy connected to a goldmine in Southwest Alaska. A proposal to bring energy to the mine involves a gasline that some allege will encroach on the Iditarod’s historic route. That mine is run by one of the Iditarod’s main sponsors: Donlin Gold. In dueling op-eds in February of this year, critics and officials disagreed about the scale of that impact.

Many mushers remain confused about the new rule, though. There isn’t much clarity about whether personal statements include, for example, buttons and banners or social media posts. Or comments to reporters.

As she ran down a checklist ahead of harnessing her dogs to race, musher Lisbet Norris explained she’s uncertain about what she can or can’t talk about.  “I think that I should be able to respectfully disagree with the mission or the actions of a particular sponsor without my position in the race being threatened,” Norris said.

The rule change passed last April, but didn’t get attention until about a month ago. One local newspaper editorial called it a bad rule, one that goes against the “plainspoken, authentic nature of the sport.”

But Hooley counters that it’s similar to personal conduct rules in major sport leagues like NASCAR, that addresses critical comments by competitors. It’s also nearly identical to the rule on the books for the Yukon Quest, a competition jokingly referred to as Alaska’s other sled-dog race.

But mushing is a tight knit community, and Zappa explained that while she understands the sponsorship pressures faced by race officials, everyone still has to deal with one another amicably. “I also think it’s important for Alaskans to be able to have civil conversations about public issues,” she said.

The Iditarod race, after all, was revived in the 1970s as a way to remind Alaskans about the legacy of dog-mushing and the historic connection to a trail through the wilderness. 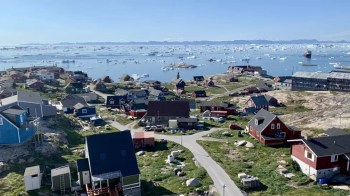