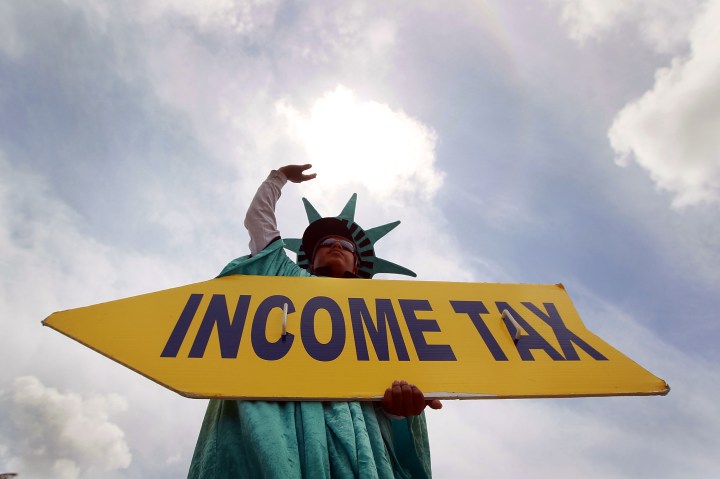 Every year, the tax refund was spent before it arrived. Chris MarkerMorse and his wife, both teachers in high-need public schools in California, knew they’d use it to pay off credit card debt they racked up buying supplies for their classrooms, their students, their schools.

“We spent quite a lot of money on that each year,” he said. “We’d put it on a credit card, get points, and then we’d use our tax refund to pay down that credit card.”

They relied on it. A lot of people do. A majority of Americans, in fact, who get refunds. Sixty-eight percent of those who expect a refund in any given year say it’s important to their financial well-being, according to a survey out Wednesday from CreditCards.com. A third say it’s very important.

“That’s not surprising,” said Mark Mazur, the director of the Urban-Brookings Tax Policy Center. “If you think that the average income tax refund approaches $3,000, that could be one month’s worth of income for a moderate-income household. So, not surprising that it’s a significant fraction of their cash flow for the year.”

The refund landscape has changed for low- and middle-income families, though, since the Tax Cuts and Jobs Act of 2017 went into effect. Many Americans saw their tax refunds drop last year, some significantly, whether because the withholding tables changed and they got more in their paycheck throughout the year, or in some cases because their taxes went up. In both instances, there were a lot of people who got hit hard.

“You can tell a lot of times, in the tax sites, people are really angry at tax time,” said Mary Arthur, president and CEO of the Campaign for Working Families, which along with the United Way, runs the Volunteer Income Tax Assistance Program, a free tax preparation service for families making up to $55,000 a year, around Philadelphia, parts of Delaware and Southern New Jersey.

“A few years back it was kind of a relief time in someone’s life, that they’re going to get this refund, so I can take care of things that are really pressing down on me. But now you’re not getting that relief anymore.”

Most Americans are actually paying the same or less in taxes than they were before the new law went into effect, according to an analysis from the Tax Policy Center. But that doesn’t mean they’re getting the same size refund. Which is what a lot of people notice.

“We estimate that around 5% of taxpayers would have a tax increase, about 80% would have a tax decrease, and about the other 15% about the same,” Mazur said. “But that’s the tax liability, that’s not the amount that you get in terms of a refund. And with the change in the withholding tables, a number of people may have moved from getting a sizable refund to getting a smaller one, or no refund at all.”

That was an unwelcome realization for some low- and middle-income Americans last year, many of whom both love and rely on that once-a-year influx of cash. Eighty-six percent of those surveyed said they would rather get a big check back from the IRS in the spring than have a little more money in their paycheck every month throughout the year.

“As an economist you look at this and you say that, essentially, people who get a large refund are providing an interest-free loan to the federal government,” Mazur said. “On the other hand, for a number of people, this is like a savings program, almost a forced savings program.”

For people who have trouble saving throughout the year, which is many Americans, that’s not necessarily a bad thing, particularly right now when interest rates are so low, and particularly if they put their refund into savings. Around a third of those who get a refund do put it into savings, the survey found, and nearly a quarter use it to pay down debt.

“I think this shows how close to the edge a lot of people are living,” said Ted Rossman, an industry analyst with CreditCards.com. “I do think it’s a good sign that people are planning to either save it or use it to pay down debt. Those are both good goals for the money.”

Arthur sees that all the time when people come into the Volunteer Income Tax Assistance Program sites for help filing. Both how close to the edge a lot of people are living, and how critical tax refunds are, particularly for those living near the poverty line.

“A lot of people use tax time as an opportunity for savings, to make changes in their lives, even if it’s to go on a vacation,” Arthur said. “It might be to fix the steps at your house where the concrete is broken.”

Or to buy new clothes for their kids, said Nikia Owens, managing director of financial empowerment at the United Way of Greater Philadelphia and Southern New Jersey. She sees a lot of parents buying their kids new school uniforms when they get their refund, often for the first time all year.

“They’re buying better groceries, to provide better food for their children. They also are able to pay for different educational expenses for their kids,” she said. “And then a big one is they’re able to catch up either on their mortgage, on the rent, and pay off a credit card or debt that they had.”

Many of the people Owens and Arthur meet are eligible for the earned income tax credit and the child tax credit, and often get sizable refund checks when they file. Sometimes those checks can be a third or half of what they make in a year.

“It’s absolutely vital to their well-being. A person earning less than $15,000 a year with two children or three children, they’re looking at a refund of, at minimum, $6,000, possibly up as high as $9,000 or $10,000,” Arthur said. “When you look at what they’re actually earning compared to that influx of dollars it’s like the lifeline for a lot of them.”

Even for those who are middle class, tax refunds often make a big difference. More than 70% of those who make up to $80,000 say getting a tax refund is important to their finances. That, combined with the rise in credit card debt, and the fact that so few Americans have a solid emergency fund, concerns Rossman.

“I think it’s troubling at this stage of the economic recovery that we’re not further along,” he said. “I think that it highlights the risk of any sort of shock or downturn or recession because there’s a lot of people that don’t have a lot of margin for error.”

Chris MarkerMorse and his wife certainly don’t, as public school teachers in Riverside, California. They were among those who felt the changes in the 2017 tax law hurt them. After always, always getting a refund, last year when they filed their taxes, they owed. And not just a little, either — $4,900.

“It was terrible,” he said. “We’re spending our cash, our money, on our classrooms, our projects, our school. And at one time that had a nice nod from the government, helping us with making that a deduction. And when they took that away, that means not only did they take it away, but now we don’t even have a refund to help pay it off.”

They hadn’t been prepared to lose that refund, let alone owe a bunch of money. So to pay off the bills they’d racked up during the school year, and that surprise tax bill, they ended up refinancing their house.

They also adjusted their withholdings, which their accountant encouraged them to do, to try avoid another big tax bill this year. But they didn’t quite get it right — once again, they owe. No refund check.

It’s also, he’s found, hard to stop doing it. Because if he doesn’t buy things for his classroom, for his students, they just go without.

“So far we haven’t found a way to spend less,” MarkerMorse said. “We just take a hit.”