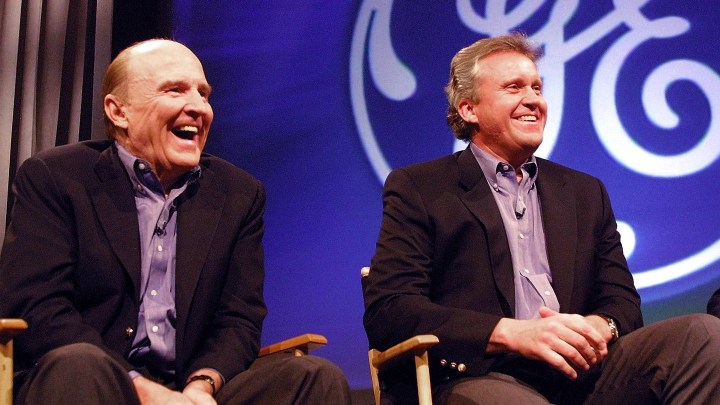 A day after his death at the age of 84, executive titan Jack Welch leaves behind a complex legacy: corporate restructuring, nimble change, slashing underperforming workers and, perhaps most of all, serving shareholders on Wall Street. He presided over the tumultuous ’80s and ’90s as chairman and chief executive of General Electric, when shareholders jumped to first in line for profits.

Once upon a time, GE explicitly served many masters: workers, research labs and suppliers. And last in line for company revenues: share owners. According to a 1953 annual report from the company’s department of employee and plant community relations, the company paid out 13 cents on each dollar in sales to taxes, 44 cents to suppliers, 36 cents to employees and 1 cent to plants and equipment. “General Electric share owners got the remaining … 3.9 cents out of each sales dollar in dividends.”

In 1981, in came a new boss, Jack Welch. He proceeded to slash underperforming divisions and workers, comparing corporate cuts to cuts that professional sports teams make.

“You bring them in, you say ‘Look, this isn’t working,'” Welch said of low-performing workers in a 2006 talk at the Massachusetts Institute of Technology. “‘You’re in the bottom 10. You’re not going to get any more money here. Let’s over the next year get you to move on.”

By then, cutting costs and pleasing shareholders was in vogue on Wall Street. The stock market soared twelvefold in the ’80s and ’90s. By one measure, for every dollar in profits, 80 cents went to shareholders through dividends and what are called share buybacks.

For GE, its company stock outperformed the broader market during the Welch years.

“He had no problem redefining the landscape and what would work,” Nicholas Heymann, former GE auditor and longtime company analyst at William Blair, said. “And in that sense, you know, became kind of the Paul Bunyan of shareholder value creation.”

The shareholder value model, however, came at a cost to workers, undoing the postwar “corporate social contract,” Rick Wartzman, business scholar at the Drucker Institute, said. Wartzman wrote about GE and Welch in his book “The End of Loyalty: The Rise and Fall of Good Jobs in America.”

“GE had vaporized about 170,000 jobs under Welch,” Wartzman said. “Up until that time, I don’t think the term ‘downsizing’ had really entered the American vernacular yet. These kind of huge mass layoffs were still seen as pretty scandalous.”

“GE had vaporized about 170,000 jobs under Welch. … These huge mass layoffs were still seen as scandalous.”

When Welch stepped down in 2001, GE relied heavily on its finance arm, GE Capital, which Welch built up. And when the financial crisis came years later, the company was hit hard. And to many, Welch’s tone seemed to change.

“As the company got into trouble, he conceded that maximizing share value is not always the smartest thing to do,” Margaret Blair, law professor at Vanderbilt University, said. “He must have begun to see there were big problems in the underlying business.”

In an 2009 interview, during what’s now called the Great Recession, Welch said that shareholder value was “the dumbest idea in the world.”

He may have been onto something. Today, leading groups including the Business Roundtable, BlackRock and the World Economic Forum are publicly rethinking the shareholders-first model and its limitations.