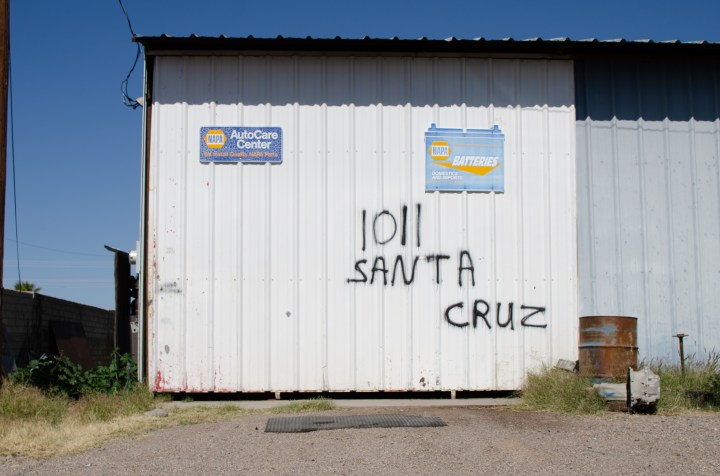 COPY
In 2008, the city of Presidio passed an ordinance requiring residents to post their house numbers. But in rural areas, knowing your own address isn’t always as simple as it seems. Carlos Morales/Marfa Public Radio

In 2008, the city of Presidio passed an ordinance requiring residents to post their house numbers. But in rural areas, knowing your own address isn’t always as simple as it seems. Carlos Morales/Marfa Public Radio
Listen Now

For rural communities across the U.S., access to healthcare can be a challenge. In the most remote parts of Far West Texas, for example, a ride to the hospital in an ambulance can run close to three hours.

But there’s another hurdle standing in the way of people who call 911 and emergency care in this isolated corner of the Lone Star State: Sometimes it’s hard for first responders to find them on a map.

With a population of under 4,500 and approximately 1,500 square miles to cover, the local EMS crew in Presidio, Texas, says some days are quieter than others. But when calls do come in, the stakes can be unusually high.

“It was a cardiac arrest, and they wouldn’t answer the phone when we tried calling them. And what should have taken us three minutes … it took us about 15 minutes to get there. By then, it was too late,” Pando said.

What took so long? Trying to find the patient’s house. According to first responders, it happens regularly. Dispatch relays an address, they rush to the scene — often using Google Maps — and find they’re in the wrong place. It’s not just a problem out on ranches or in the more remote communities nearby. Often, it’s right there in Presidio’s city limits.

This doesn’t just happen in West Texas. Several years ago, the federal government ordered cell phone carriers to improve location technology for the benefit of people who call 911. But problems persist in rural America. A 2017 study found ambulance wait times in rural areas are about 15 minutes, almost double the national average.

In Presidio, many obstacles stand between ambulances and people’s front doors.

“Let’s pretend that you have received a call to 411 Rosedale,” said EMS director Malynda Richardson. She emphasized it was just a hypothetical situation, but an especially good one. Within city limits, there’s a Rosedale Avenue, a Rosedale Drive, and a Rosedale Street.

But according to Richardson, spotty signage is just the beginning. The city renamed a handful of streets to honor U.S. veterans almost ten years ago. Google hasn’t caught up yet. There are other discrepancies that have less to do with the navigation app, and more to do with city planning. Some houses on the same street have duplicate numbers. Some don’t have numbers at all. Here, and in many other rural areas, street names and house numbers are a relatively new phenomenon.

According to Richardson, many Presidio residents don’t actually know what their official address is. They might have one assigned by the gas utility, and another from the telephone company. In some cases, neither of those match up with what the city has on file.

Alma Martin, chair of Presidio’s planning and zoning board, people often don’t think about this until they need an ambulance to show up at their house.

“I really, really want to get our 911 addresses in order,” Martin said.

According to Martin, before the times of smartphones and car GPS, physical addresses weren’t really a part of life in Presidio. Residents relied on post office boxes for mail, and the town was smaller and closer-knit. Everyone pretty much knew where everyone else lived. But times have changed.

The city recently secured $35,000 from a local association to get things in order. Martin’s proposing a door-to-door address audit. She hopes Presidio officials can finally enforce the local ordinance that requires residents to post their house numbers, “for ambulance services, for fire departments, for law enforcement services, for the poor UPS guy, the FedEx guy,” she said.