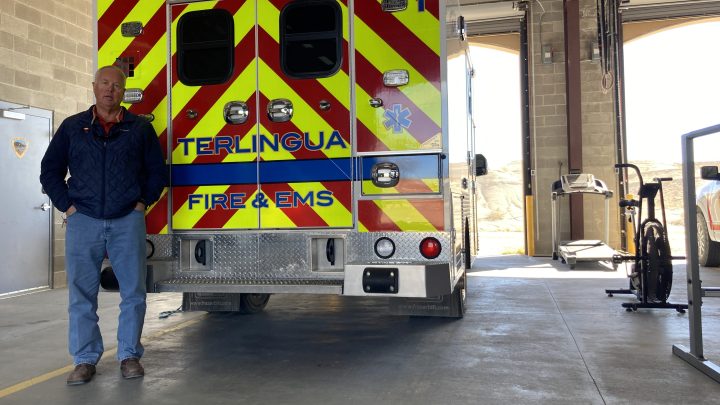 COPY
Greg Henington, a local EMS and fire chief in rural Brewster County, is leading a task force focused on finding a new ambulance provider for part of the county. Travis Bubenik

Greg Henington, a local EMS and fire chief in rural Brewster County, is leading a task force focused on finding a new ambulance provider for part of the county. Travis Bubenik
Listen Now

Jessica Scudder, a native of small-town Alpine, Texas, had a pretty unique childhood.

“I grew up around ambulances,” she said. “For a very long time, the ambulance office was our house.”

Her father, Mike Scudder, ran the town’s only ambulance company for decades. But after he recently died, the company closed up shop. Now officials here are trying to answer an urgent question: Who’s going to respond when somebody calls 911?

One of the people working on that is Greg Henington, the emergency medical services and fire chief in Terlingua — Alpine’s neighbor by West Texas standards, but still a good hour and a half away.

“We’ve got four full-time personnel, plus myself, so there’s five of us,” Henington said.

EMS crews in this rugged part of Texas cover a lot of ground. Brewster County alone spans 6,200 square miles of Chihuahuan Desert terrain. Henington’s small ambulance team used to cover just the southern half of the county; now, since the other crew shut down, they’re covering the whole thing.

“And we have put a limit on it because it is stretching us pretty tightly,” he said.

Henington, who is running for local office as a Republican, has told officials that he’s available to help out until the end of April. He’s now leading a task force focused on finding a new ambulance provider for the county’s northern half by that deadline.

“There is an urgency to get this done,” he said. “You know, we’re holding it together, but we don’t want to do it forever.”

The task force is trying to pick between a couple of options: The county could start its own ambulance service or officials could try to recruit a new private company. But according to EMS experts, there’s not much incentive for companies to move into new rural areas.

According to Smith, ambulance providers get paid every time they transport somebody, so companies in sparsely populated areas just can’t make enough trips to turn a profit.

“If there’s a local government entity that’s thinking about, ‘Well, are we going to have to fill a void?’ they just need to come to a realization that it’s not a lucrative business, and they’re going to have to spend some money to do it,” he said.

Starting an ambulance service isn’t cheap for anyone. In Texas, grants and state funding can help, but according to the state trade group, an ambulance costs about $125,000.

Hiring is a challenge, too. EMS crews across the country have been struggling with pandemic-related burnout and staffing shortages. It’s such a problem that Texas lawmakers recently allocated about $22 million for EMS recruitment efforts, particularly in rural and underserved areas.

Despite the challenges, the top official in Brewster County, Democrat Eleazar Cano, has promised that there won’t be a gap in ambulance services.

“That will never happen,” Cano said at a recent public meeting. “We’ll figure out a way to keep the ball rolling.”

The county’s task force is leaning toward the government-run ambulance provider option, but officials haven’t reached a final decision yet.