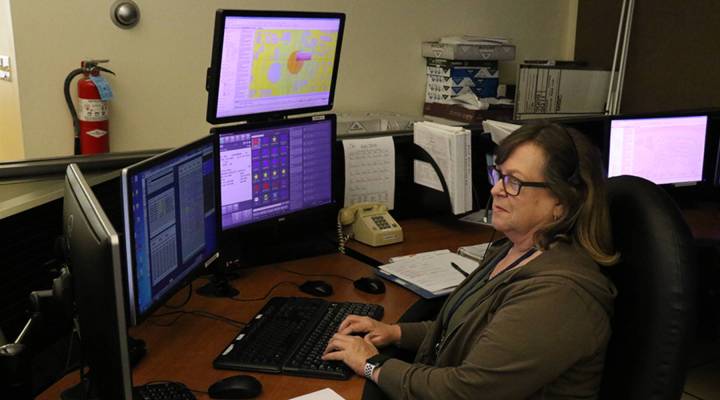 Marilyn Scott is a retired police officer and 911 call taker for city of Little Rock, Arkansas. She sits in a large room of desks that are mostly empty in front of four computer monitors that show her emergency call information. She takes a call.

“Little Rock 911, what’s the address of your emergency? Ma’am, it was doing what? Ma’am, I’m sorry, you’re pulling the phone away from your mouth. I can’t hear you,” she told the caller.

Scott is one of three to four people working at any given time fielding emergency calls in Little Rock, and the pressure is intense. The call center handles an average of 71 calls an hour during the day.

In a recording from July, a caller eventually reveals she’s a Walmart employee concerned about a customer who had been asked to leave earlier in the week, so Scott sends the police. By the time they arrive, the customer is gone.

“You can’t go fast enough. The phones are usually always ringing,” she said. “The people on the other end of the phone usually don’t understand why you are in hurry, but you are in a hurry to get another call.”

The call center is short staffed by about 10 call takers. Last year, the city raised annual call taker pay to about $35,000 to keep workers. That’s up from $28,707. But even so, there’s a high turnover rate. Lots of people get trained and then quit.

“We’ve got somebody here 24 hours a day. The pay for what they do and the role they play in the emergency response is relatively low,” he said.

The staff shortage isn’t lost on residents like Whitney Patterson Steel. She lives in an area with high crime. She’s called 911 a few times after she heard gunshots. She said sometimes she’s waited up to five minutes for an answer, so she just hangs up and calls again.

Whitney Patterson Steel is a resident of downtown Little Rock who occasionally calls 911 about problems on her street.

Arkansas Public Media reviewed city data from May and June and found 15 percent of calls were abandoned by callers before someone picked up. Overall, Little Rock’s 911 answered 67 percent of calls within 10 seconds in the first half of 2018. That’s short of the industry standard of 90 percent.

“The 911 world is kind of the forgotten public safety service, and yet it’s the one used most by the public,” Fontes said.

The 911 call centers are funded largely through fees all of us pay on our phone bills. But Federal Communications Commission data from 2016 show those fees accounted for only about three-quarters of the cost to operate the system nationwide that year. States and municipalities were on the hook to cover the rest.

Fontes said tight budgets are partly why 911 has yet to enter the digital era. Most call centers, he said, can’t afford to buy equipment to automatically show a caller’s location or receive texts or videos.

“Much of 911 as we see it today is what I call last-century technology, it’s voice-centric,” he said.

Almost all states are somewhere in the process of digitizing 911. That will allow call takers to remotely step in to another city’s call center when it becomes overwhelmed.

Legislation introduced in Congress would pay for the capital expenses of 911 digitization nationwide. There is still no price tag for those changes in the bill.