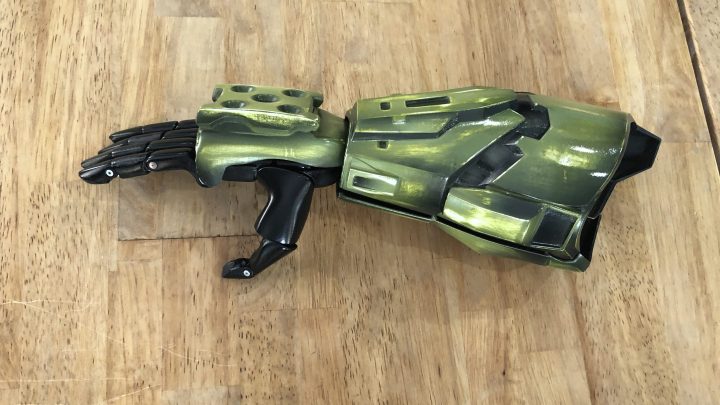 COPY
A 3D-printed bionic arm, created by Limbitless. The company hopes to bring down the cost of robotic prosthetics. Sabri Ben-Achour/Marketplace

A 3D-printed bionic arm, created by Limbitless. The company hopes to bring down the cost of robotic prosthetics. Sabri Ben-Achour/Marketplace
Listen Now

At 14 years old, Annika Emmert of St. Augustine, Florida, has gone through a lot of prosthetics.

Born without much of her right arm, she was given prosthetics early. They were clunky.

“My first ever prosthetic was very heavy for a 2-year-old. I just put it in my toy box.”

Her mother, Karon Bryson Emmert, calls it “the most expensive toy box in the ‘hood,” because so many of Annika’s prosthetics ended up there.

Children outgrow prosthetics quickly, and they need replacing. Prosthetics can range from $2,000 for a finger up to well over $50,000 for a more complex limb.

“My leg was $22,000,” said Craig Demartino, a climbing instructor in Colorado who lost his leg in a climbing accident. Insurance covers 80% of the leg he uses for walking. Whereas children outgrow prosthetics, adults wear them down, so they also may need replacing every few years.

Demartino makes his living climbing, and so requires a special leg for that purpose — one that is not covered by insurance. That’s a second prosthetic leg — and another $22,000 — that also needs replacing every few years.

Demartino said he’s lucky because corporate sponsors and friends help him with costs. He’s also found cheaper parts, like screws, at hardware stores for less than 20% of the cost of medical grade parts.

Around 1.9 million people are living with limb loss in the United States, according to the Amputee Coalition. Around 185,000 amputations are performed each year on average, and that number is expected to double by 2050.

Albert Manero is among those trying to change this, at least for children. He co-founded Limbitless Solutions, a nonprofit run out of the University of Central Florida in Orlando. A steady soft hum in the back of his office reveals a host of rapid manufacturing equipment.

“We have four of our 3D printers running, that’s how we make the plastic parts of our arms,” he explained. A few feet away, a thermal form machine makes plastic sheaths for the robotic arms.

Limbitless uses 3D printing and other rapid manufacturing techniques to, it hopes, bring down the cost of robotic prosthetics. Manero said Limbitless is among the first to do so. These are techniques he said some traditional prosthetic limb makers, who are invested in older, more expensive technologies, have been slower to adopt.

Limbitless is focusing on arms for kids, and its bionic robotic arms are currently in clinical trials. Its hope is an arm that costs $5,000 in total.

Joe Johnson is a prosthetist at Quorum Prosthetics in Windsor, Colorado. He makes and fits prosthetics. He’s an amputee himself, and said “the future of prosthetics is definitely heading directly towards 3D printing for sure.”

He said low-cost 3D printing is likely to have the most effect on costs of prosthetic arms, which aren’t weight-bearing, and would be a good option for children.

Groups like Limbitless are funded through donations, which, in addition to its low-cost manufacturing techniques, is a big factor in its ability to offer lower-cost limbs. But even for traditional prosthetics makers, individual components are one of the primary costs, and if those come down, it would reduce costs overall.

Annika Emmert got her prosthetic arm from Limbitless and shows how it responds to nerve impulses by flexing open and closed. It’s lightweight and grips, and can make gestures (some gestures are subject to parental control in the programming).

It does not blend in — it is a robotic arm. There is no flesh-colored silicone, and that’s how Annika prefers it. She designed it herself.

“This one I designed with swirls, so I have silver swirls on, like, a blue background, and then there are some random little dots in between. I actually love how it’s not bare skin tone.”

Recently, she was able to do something she was never able to do before: zip up her jacket.

If the market for prosthetics is disrupted by new manufacturing techniques, more kids may get prosthetics earlier and more cheaply.