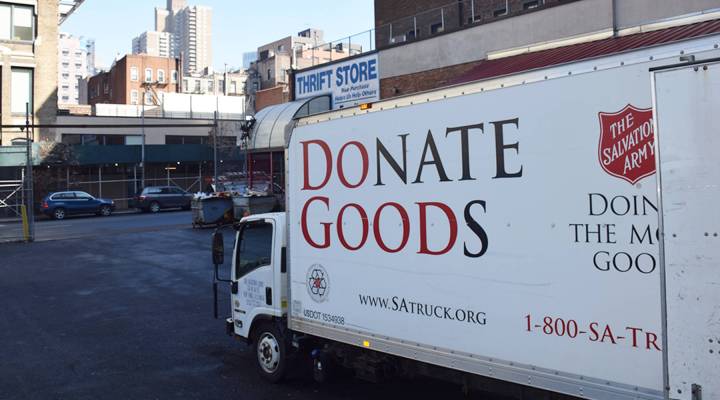 Near midnight, Roshan Owais was desperately trying to sell a drafting table that retailed for $300. She struggled to offload it for $65.

She was also trying to ditch a shelving unit, two leather armchairs and a wooden table. That’s on top of the three bags of clothes she already donated — all inspired by organizational guru Marie Kondo and her new hit Netflix show “Tidying Up with Marie Kondo.” As in her 2014 bestselling book, Kondo encourages people to get rid of items that don’t “spark joy” for them.

In preparation for an upcoming move to a smaller apartment, Owais watched the series.

But in New York, there’s a difference between deciding to get rid of something and actually getting rid of it.

Roshan Owais in front of a leather armchair she hopes to sell.

“I mean, these are huge things. It’s not like you can just disassemble them and it will be fine,” she said. “They won’t fit [in] an Uber XL.”

When Owais’ buyer finally showed, he was almost two hours late and empty handed — he didn’t bring any tools. Owais didn’t have the correct tools either.

She sifted through drawers and asked the doorman for help, but after some failed attempts with an ill-fitting Allen key, they decided he’d have to come back another day.

These minor downsizing tragedies are part of why some New Yorkers end up just trashing things that don’t spark joy. Textiles make up a little over 6 percent of what is sent to landfills from New York City. The Department of Sanitation says every day its workers pick up items that could have been donated or reused. Leaving stuff on the curb is just so much easier than cramming bags of junk into a packed train and lugging them up subway stairs.

The Salvation Army is among a handful of charities that will actually come and pick up used clothes and even furniture. It’s a huge operation.

In a massive midtown warehouse there are metal carts filled with donation bags, wooden pallets topped with stacks of TVs and a row of at least 10 mattresses. A fleet of trucks comes and goes five days a week — 20 trucks and 20 paid drivers, plus dispatchers and warehouse staff.

Metal carts filled with donation bags on the loading dock are ready to be sorted at the Salvation Army’s Manhattan location.

“It is expensive to keep a fleet going and employees and all the wear and tear on the trucks,” said Fred Muhs, who has been with the Salvation Army for over 30 years.

Fred Muhs has been with the Salvation Army for over 30 years.

“Here we are picking up somebody’s television that we may be able to put in our store and get $50 for,” he said.

Higher-value donations end up making pickups worth it, but some items simply can’t be sold at all.

“We’ve gotten caskets, prosthetic limbs. We can’t really use those, but, you know, we get them. We got ashes one time, somebody’s ashes.”

Pulling out a machete from a pile of donations, Muhs said, “We get it all.”

Other unusable items sit in a heap on the loading dock. The Salvation Army has two additional dump trucks just to haul that joyless junk away.