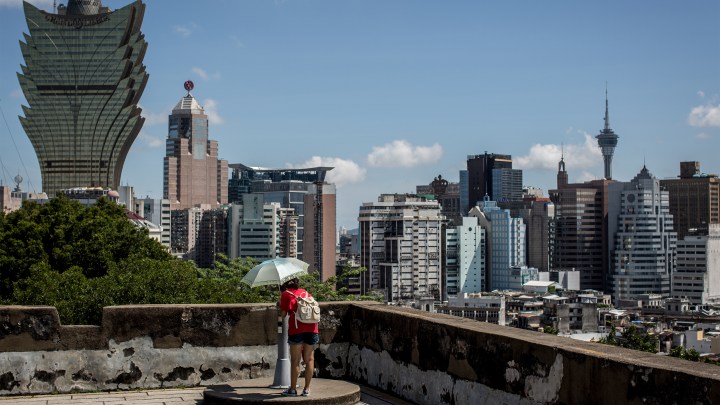 COPY
Macau is now the world's gambling capital. Above, a woman views the Grand Lisboa Hotel and Casino from the Monte Fort in 2013 in Macau, Macau. Chris McGrath/Getty Images

Macau is now the world's gambling capital. Above, a woman views the Grand Lisboa Hotel and Casino from the Monte Fort in 2013 in Macau, Macau. Chris McGrath/Getty Images
Listen Now

Xi’s visit coincides with the 20th anniversary of Macau’s handover from Portugal back to China. Macau has not experienced the Hong Kong-style demonstrations challenging the Chinese government.

“Beijing is making it clear that well-behaved territories will get carrots and unruly territories are going to get sticks,” said Eswar Prasad, Cornell University economist and former head of the China division of the International Monetary Fund.

Macau, now known as the world’s gambling capital, was eclipsed by Hong Kong as a trading and financial center in the 19th century. But Xi Jinping on this trip is expected to announce policies enhancing Macau’s profile as a financial city, including the establishment of a new stock exchange that uses the Chinese currency rather than the U.S. dollar.

The exchange could link China with trading partners in the Portuguese-speaking world.

“That is something that Beijing has long seen could be useful, to engage with Angola and Mozambique in Africa, and Brazil, where Portuguese-speaking countries are resource-rich,” said Cathryn Clayton, chair of the Asian Studies Program at the University of Hawaii at Manoa.