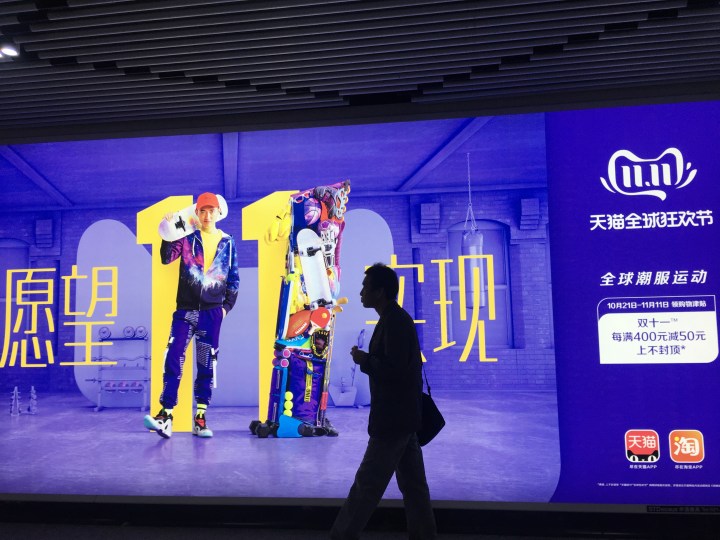 E-commerce giant Alibaba reports that people bought 268.4 billion yuan ($38.3 billion) worth of goods and services on its platforms during the 24-hour event.

JD.com says that investment to develop logistics into more rural areas of China has paid off, despite slower economic growth in those regions.

In the 48-hour lead up to the Singles Day shopping festival, the Marketplace Shanghai bureau received lots of text messages with coupons and discounts.

Other messages conveyed a sense of urgency to shoppers.

“If you miss this deal, you’ll have to wait another year!” JD.com wrote in a text message.

These types of ads may have worked. By 4 p.m. on Nov. 11, Alibaba reported that sales on its platforms crossed the $30 billion mark.

The biggest e-commerce platforms in China sold 314.3 billion yuan ($44.9 billion) on Singles Day in 2018, according to a Chinese big data company, Syntun.

Leading the pack, according to Syntun, are Alibaba’s e-commerce sites, which accounted for 68% of the online sales during Singles Day in 2018. Clothing, home appliances and decorations were the top-selling items.

JD.com came in at a distant second, accounting for 17% of sales. JD.com is typically strong in consumer electronics and home appliances.

Nov. 11 was chosen to be Singles Day because the date 11/11 looks like four bare sticks. Its origin is not clear, according to Chinese state-run media. A widely reported version is that some college students in eastern Nanjing city in the 1990s either wanted to beat loneliness or celebrate singlehood by dining with unattached friends and singing karaoke.

It became popular among students and white-collar workers, which then led restaurants, florists and other businesses to offer discounts on the day to boost consumption.

Then on Nov. 11, 2009, Alibaba joined in, leading other online sites to follow. These days, Nov. 11 is less of a celebration of single people and more about shopping promotions.

“It has an ecosystem [so] if its e-commerce is good, its other businesses, like logistics and cloud computing, will also be boosted,” said e-commerce analyst Danny Law at Guotai Jun’an Securities in Hong Kong.

Although China’s government reported that its economy is growing at its slowest pace in nearly three decades, at 6% in the third quarter this year, online sales have been robust, reaching just over a trillion dollars from January to September of this year, up 16.8% from the same period in 2018, according to the Chinese ministry of commerce.

American firms selling to Chinese consumers may suffer, though, as tensions with the U.S. continues and create uncertainty for businesses.

A poll of some 2,000 people from research firm AlixPartners found that 78% of Chinese consumers say they’re less likely to buy American brands on Singles Day, out of national loyalty.

Consultancy firm RedTech Advisors recently concluded a survey of 60 big merchants operating on Alibaba’s platforms on their sales optimism over the next six months.

Alibaba is counting on shoppers like Wang Jiang, a mother of one in Shanghai.

Nearly two weeks before the sale, she showed Marketplace that she had 118 items worth 38,000 yuan ($5,400) in her shopping cart on Alibaba’s Taobao app, consisting mostly of clothing for herself and her child.

U.S. was top seller to China during Singles Day