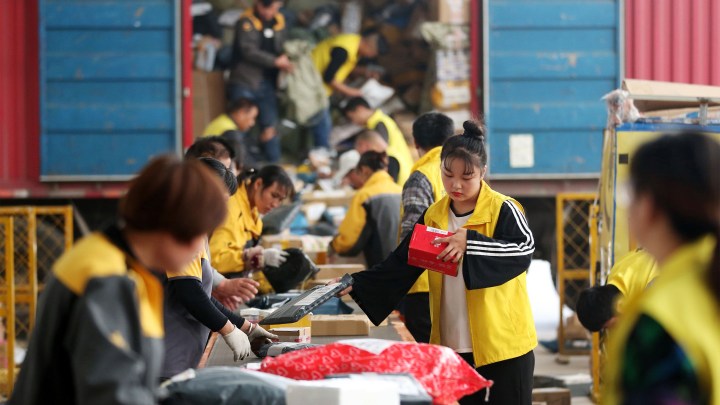 COPY
Employees sort packages ahead of Singles Day in Huaibei in China's eastern Anhui province in 2017. Singles Day is a shopping spree held every Nov. 11. STR/AFP via Getty Images
The Season

Employees sort packages ahead of Singles Day in Huaibei in China's eastern Anhui province in 2017. Singles Day is a shopping spree held every Nov. 11. STR/AFP via Getty Images
Listen Now

The biggest shopping day of the year is coming, and it isn’t Black Friday or Cyber Monday. In fact, it’s more than twice as big as both of those combined in terms of total sales. It’s the Chinese shopping event Singles Day on 11/11 (all those ones stand for single people — get it?) Chinese shoppers will spend tens of billions of dollars. But this year, they may not be buying as much from the United States.

A new poll from research firm AlixPartners found that 78% of Chinese consumers say they’re less likely to buy American brands for the holiday.

“There is this general perception that with the trade war, the American government isn’t exactly playing fair, and it’s really hurting the local companies, and they feel like it’s been unfairly targeted,” said Shanghai-based Jason Ong with AlixPartners.

That may mean trouble for U.S. companies. Ong said retail stalwarts Nike or Apple may weather the storm, but smaller companies may feel the impact.

But even if consumers want to avoid buying U.S. goods, Ali Shourideh, an economist at Carnegie Mellon University, said it’s hard to know which goods those are.

“We produce something in the U.S., we ship it to Canada, Canada adds something to it and then ships it to China and then comes back to the U.S., and so on and so forth,” he said.

Finally, Ong at AlixPartners said what consumers say they’ll do isn’t always what they actually do.