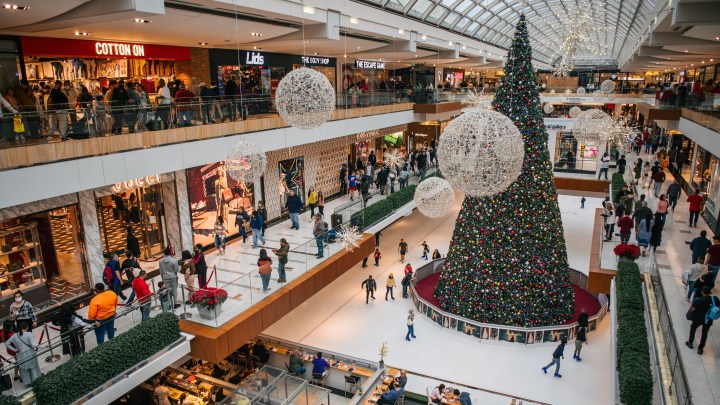 COPY
New data shows that in-store sales on this year's Black Friday were down compared with pre-pandemic levels. Above, the festive Galleria mall in Houston on Black Friday. Brandon Bell via Getty Images

New data shows that in-store sales on this year's Black Friday were down compared with pre-pandemic levels. Above, the festive Galleria mall in Houston on Black Friday. Brandon Bell via Getty Images
Listen Now

In-store shopping was down on Black Friday compared with pre-pandemic times, according to data from Sensormatic Solutions. That was also true for e-commerce spending on the big sale day, based on analysis from Adobe.

On Cyber Monday, there was evidence that shoppers have been spreading their spending over more than just a few days.

Kinshuk Jerath, a digital marketing professor at Columbia Business School, said his email inbox was relatively quiet on Cyber Monday. “I don’t feel like I’m being blasted by ads for the last three or four days about how cheap things have become,” he said. “There’s been some of that, but not as much as usual.”

Retailers may not see the need for sales, Jerath said, because inventory is limited and many consumers seem to be heeding retailers’ calls to shop early over multiple days.

This November has had more big online shopping days than last year, according to Vivek Pandya, an analyst with Adobe.

“This year, when we look at the amount of days that have seen $3 billion or more spent online, we’ve seen about 21 of those. When we compare it to the same period last year, we only saw about eight,” he said.

That’s a lesson retailers may keep in mind for next year as they weigh whether to launch promotions around traditional sale days.

“They’re going to try to keep these days still there for consumers who like to shop on them, but then open up the impact to the broader season so that they can maximize revenues during that time too,” Pandya said.

Some retailers may have the luxury of taking the emphasis off deal days. But that’s not the case for others, like mall merchants and some clothing retailers.

“Cyber Monday is still very, very important for a lot of companies who have not been able to crawl out of the hole that the pandemic has put them in,” said Sucharita Kodali with Forrester.

So for those companies, she said, Cyber Monday is still a lifeline.