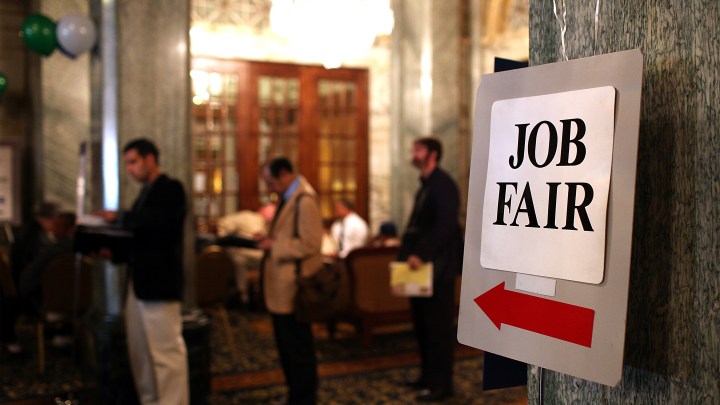 Congress still hasn’t passed a budget or a short-term spending bill for 2020, and if it doesn’t by Nov. 21, it’ll trigger another government shutdown. And the last shutdown, which stretched 35 days, is having an effect on efforts to staff up the government.

More than 400 students showed up at a gym at Montgomery College in Maryland for a recent federal job fair. They were there to meet government recruiters — no companies were allowed.

Even with the turmoil in Washington, the federal government has held onto its appeal: at the end of September, applications for federal jobs were up 2% from the year before, according to the Office of Personnel Management.

The students here see the government as a good place to start a career.

“Stable is the main thing — that’s what I’m looking for,” says Katherine Lyons, who’s studying gaming and simulation at Montgomery.

There was some concern about how another shutdown could disrupt that stability. Peter Frantz, a recruiter at the Federal Highway Administration looking to hire engineers and interns, said about 10% of the students who stopped by asked about shutdowns.

“So they don’t want to go into something where they know, maybe there could be a chance even in the next couple of weeks here, that we might have something dramatic come up again,” he said.

Frantz said students wanted to know things like, which agencies usually shut down? What happens when your work gets put on hold? When do you get paid? He reassured them they wouldn’t have to wait too long for back pay.

Daphne Zamora, a freshman at Montgomery College, didn’t need any reassuring, though her mother was concerned. But Zamora was undeterred. She’s looking for an internship in law enforcement or national security.

Over at the State Department table, across from FEMA, recruiter Tanya Rogers was dealing with another of the government’s self-inflicted wounds. The State Department froze hiring for more than a year. Rogers said many applicants didn’t stick around waiting for the thaw, which finally came in 2018.

“We have a pipeline of applicants,” she said. “So when there’s a stop to hiring, it throws us behind in that pipeline.”

Other agencies had shorter hiring freezes, but are still struggling to recruit. It’s a competitive job market, plus the government can’t always match salaries in the private sector. And while the shutdown wasn’t a top concern for the students at Montgomery, it drove some federal workers to quit.

“The rhetoric surrounding shutdowns often includes people saying, ‘Well, it doesn’t matter. They don’t do anything important anyway,'” said Erica Groshen, who headed the Bureau of Labor Statistics from 2013 to 2017. “That’s really demoralizing to these really dedicated public servants.”

Federal workers started bailing out of government jobs last December, as the shutdown got underway; 22,000 quit in March. That may not seem like much by federal workforce standards, but it was the most in a single month since 2010. That brain drain can affect national security.

Neal said the Pentagon is holding steady now with around 740,000 civilian employees, but the federal government as a whole has more workers over 60 than under 30. So without more young applicants from places like Montgomery College, the government could be left scrambling to fill vacancies as boomers retire.