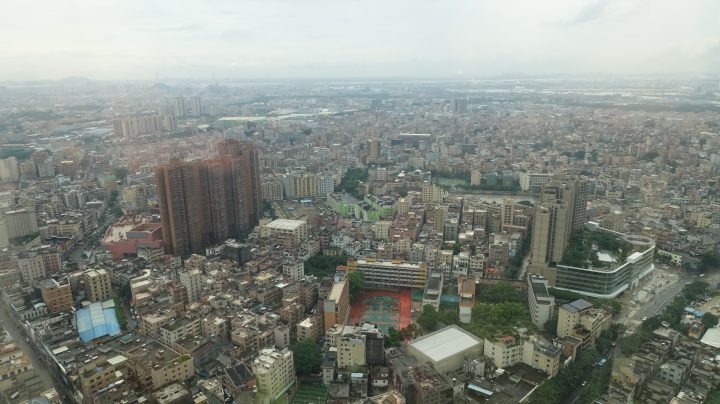 As part of a series on Communist China’s 70th anniversary, Marketplace’s China correspondent Jennifer Pak and Shanghai bureau news assistant, Charles Zhang, spoke to people in the country’s shoe industry — the world’s biggest — about their achievements and challenges over the last few decades. You can read more stories from the China 70 series here.

Communist China is celebrating its 70th anniversary this week; in 70 years, it has grown to be the world’s second largest economy. Much of that growth is owed to its manufacturing sector. But even before the current U.S. trade tariffs, low-end manufacturing has been shifting out of the country.

We spoke with two people who experienced that decline and made a pivot into different kinds of business. Their answers have been edited for grammar, style and brevity.

Occupation: Sourcing products with a focus to sell to China

Years in the shoe business: 24 years, working with big brands like Adidas and Crocs

What brought them to Dongguan city?

Quon: Back in 1990, Quon got a tempting offer from his uncle in China. His uncle’s sewing factory in Dongguan had one thousand machines sitting idle, and he wanted Quon to drum up orders for finished products. Quon had been doing some trading in the U.S. but he was not familiar with the manufacturing side. While nervous, he said yes and moved to Dongguan.

“I was young and I was up for the challenge,” he said.

Gau: Gau studied foreign trade in university and after graduating in 1995, he arrived in southern China. His first job was with Pou Chen Group, the biggest shoe manufacturer in the world.

“They said: ‘Oh, you speak English. Good. We need someone working the Adidas Development Center.’ Adidas is a big name. So I said yes,” Gau said.

What was it like doing business in China back in the 1990s?

Quon: It was a steep learning curve for Quon, but he was a quick learner. At its peak in 2000, the business was manufacturing nine million items a year, stuff like t-shirts and soft toys. More than half of it was exported to the U.S. It was common for a factory employee to leave after five years to open another factory, a fraction of the size, and start doing the same thing.

“That’s how China expanded so quickly. Everything is in clusters. Dongguan was known for garments, shoes, furniture, even electronics. There are certain areas that specializes in knitting socks, and somewhere else for drinking cups,” Quon said.

At the same time, he helped people from the U.S. source products from China. “I had so many people looking for me because I spoke English,” he said.

Gau: The shoe manufacturing industry experienced steep growth between 1990s and 2010. At that time, said Gau, if you started any business related to the shoe industry, you’d be very wealthy. “No cost pressure and there was always a need for new capacity,” he said.

“Younger generation consumers, they look for more customized or personalized products. And they always look for a quicker delivery,” he said.

But, he added, customers are not willing to pay more, which can squeeze shoe producers to cut costs further.

How did they cope?

Quon: Quon got out of the manufacturing side and stuck more to importing goods for the Chinese market, such as food from Brazil and sand and rock from other parts of Asia for the construction business.

Gau: In 2017, Gau and a friend launched the consultancy firm FMNII, which is focused on sustainable sourcing and helping the shoe industry adopt digital technology to cut costs. They built an app, Swatchbook, to simplify the shoe design process, which Gau said usually takes a lot of back and forth between factory and designer. His app can scan in a pattern and put it on a 3D model of a shoe to see how it looks. The app can get shoe designs done in maybe a matter of days, rather than weeks.

President Donald Trump suggests China is the winner in this trade relationship. Agree?

Quon: As an American in China, Quon did feel like a winner when he was more involved in manufacturing. But things changed quickly during the Great Recession, and he saw the writing on the wall.

“A lot of friends, industry friends around us, they approached us and said: ‘Hey, tell us about future. We really want to quit this industry.’ So, they are not making much money,” he said.

Will China lose its manufacturing edge?

Quon: “No, China is going to reinvent itself, making higher quality, more expensive items,” he said.

Gau: No, said Gau; China’s advantage is its supply chain.

“For example in Houjie district (in Dongguan) there is one whole street where you can find almost everything footwear-related: material, machinery, sourcing, components, even a design studio,” he said.