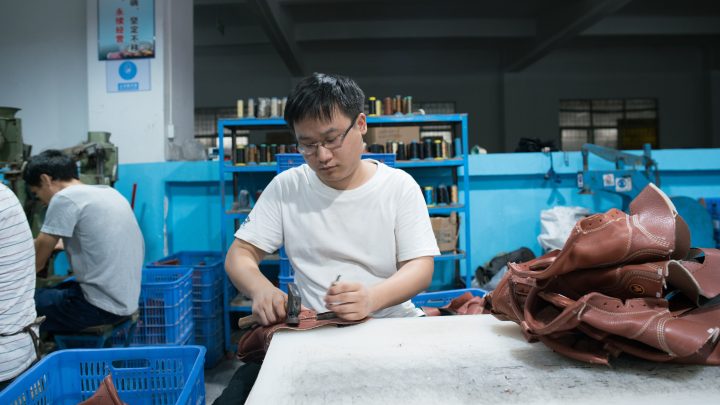 COPY
Hu Maolin was left in the care of his grandmother when he was two years old, while his parents worked in the cities. Photo courtesy of Shanghai 808 Studio
China 70

Hu Maolin was left in the care of his grandmother when he was two years old, while his parents worked in the cities. Photo courtesy of Shanghai 808 Studio
Listen Now

China’s economic success in recent decades has been built on the huge sacrifices of hundreds of millions of migrant workers willing to be split from their families for most of the year.

In many cases, cities don’t allow migrants’ children to sign up for school unless their parents are officially registered there. The registration process is long and hard.

Hence, parents will leave their children in the care of grandparents back in the countryside. They’re referred to by the Chinese state media as the “left-behind children.”

According to a report by China’s Renmin University, the number of children left behind in the countryside when their parents went off to work in the cities in 2000 was 24 million. That figure more than doubled within five years to 59 million.

More recent reports suggest that figure has remained around 60 million.

Marketplace spoke to two men in the southern Chinese city of Dongguan who were left behind by their parents as children. The answers have been edited for grammar, brevity and style.

Years in the shoe industry: 12 years

Years in the shoe industry: 1 month summer intern at a factory

Father’s current occupation: Cook at a canteen in Dongguan city

Age left in the countryside?

Nie: 14. His mother left in 2003 to work at a shoe factory some 900 miles away in Dongguan city. She didn’t return home that first year because she didn’t have many holidays. Then, his father joined his mom, leaving Nie and his younger sister in the care of their grandparents. “Not having my parents around was tough. There was nobody to keep us in line or help us with school work,” he said.

Hu: Two. His parents have been away from their village for most of his life doing various jobs in the cities. He was raised by his grandmother and didn’t see his parents often. Now he stays with his parents in Dongguan city when he is on semester break.

How they started working in shoe factories:

Nie: He quit school after junior high and followed his parents to Dongguan city. Then his mother got him a job at the same shoe factory she worked at.

Hu: During this past summer holiday, he needed pocket money and joined the Longho shoe factory for a month. His job was to punch holes into work boots that will be shipped off to the U.S. He made 2,300 yuan ($320) a month, which included three free meals a day and a bed in the dormitory. “The work is easy enough, but the salary is too low,” Hu said.

Why they left the shoe factories:

Nie: For more than a decade, he moved between shoe manufacturers and embroidery factories, but didn’t like the work or the 12-hour days. “It was the same thing day in, day out. So boring!”

He started his own business in 2016. Nie said he didn’t have many skills but he did learn to embroider at a factory. With the help of his parents, he invested in three big machines, which can sew tags and embroider designs on shoes. He has two workers. Together, they can get through up to 600 pairs of shoes a day.

Hu: He was working at the shoe factory during the summer, while he was on semester break from his university. He is set to graduate in 2020 and has no plans to return to shoe manufacturing. “My cousin is the chief engineer of a chemical factory, so I plan to work with him after I graduate,” he said.

Do they feel like winners in the U.S.-China trade relationship?

Nie: No. When he first started his embroidery business in 2016, he had steady orders. Nie estimates half of the shoes he works on end up in America. However, the uncertainty over further tariffs on Chinese shoes has put off his clients from ordering. “I’m getting 20% to 30% fewer orders than I was getting two years ago,” he said. As China celebrates its 70th year of Communist party rule, he is excited to welcome his first child. While shoe manufacturing has given him an opportunity to be his own boss, he doesn’t want his child to work in the industry in the future. “It is such difficult work,” he said.

Hu: As far as trade goes, Hu believe the Americans are getting at least as good a deal as the Chinese. A pair of work boots he is producing retails for up to $300 in the U.S. – equivalent to one month of his salary. “We make these shoes for American brands, and [the brands] sell them in the U.S. We get paid to produce the shoes, but a lot of the profit goes to American retailers,” he said.