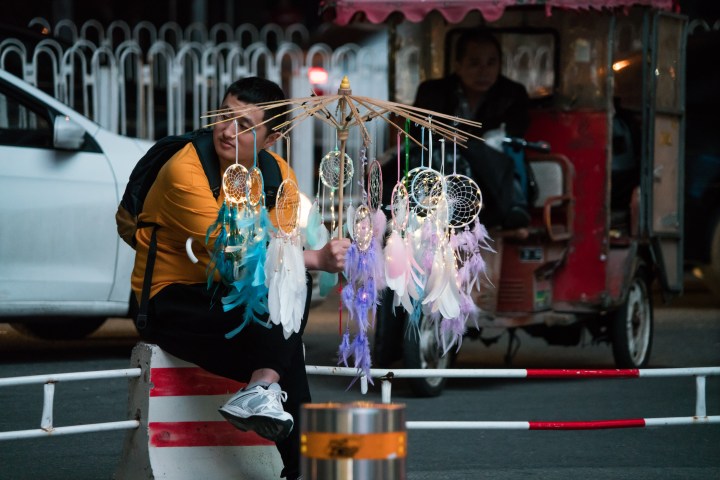 China owes much of its economic success to hardworking people from poor rural areas who were willing to migrate for work to the cities and to the manufacturing belt along the country’s east coast.

Many of them will have to return to the countryside when they retire unless they are officially registered in the cities they work in. However, the household registration process can be long and hard.

Marketplace spoke to a husband and wife from the countryside who did succeed in being officially registered in the nation’s capital, Beijing.

What was it like to grow up in the countryside?

Tai: When Tai Lijun was very young, he ate a lot of steamed buns made from sweet potato leaves. “Back then I only ate meat twice a year,” he said. Farm work was the main source of income for his family. “My parents grew cotton on their small plots of land and all they could earn annually was 1,000 ($140) to 2,000 yuan ($280).” The money was just enough to feed the family of five. When he was about 15 years old, he and his younger brother had to spray pesticides on the cotton fields during the weekend and holidays. “Each container of pesticide weighed some 40 pounds and we had to empty 30 containers in a single morning.” He did not enjoy the farm work. If he wanted to escape that work, and leave the countryside, he had two choices – work in factories or go to college. He chose to study hard and was accepted to a university in northwestern China’s Gansu province.

Wang: She ate a lot of sweet potatoes and, because rice was considered too expensive for her family, they ate more wheat-based products. Wang had meat only once a year. Her father was a doctor practicing in the countryside, but he also grew cotton and wheat. Starting at the age of nine, she had to do farm work, which she found tiring. Wang felt motivated to get into university so that she could escape the countryside.

What were they studying in university?

Tai:He did an engineering degree in water management. “There were about 300 households in my village and I was the first to go to university,” he said. Tai seemed set for life. Under China’s planned economy at the time, universities decided where graduates would work. When he graduated in 1998, he was sent to work at a state-owned firm that produced railroad cars in Beijing.

Wang: She majored in industrial automation in university and graduated in 1999. That year, China reformed the system so that colleges no longer determined where students worked after graduation. Wang was free to choose where she would work but she still chose a state-owned company – the same one as her husband.

What was it like to work in state-owned enterprises?

Tai: His job was to manage the power and water supply of the firm’s production workshop. His starting salary was 620 yuan ($87) per month, which was barely enough to cover his expenses. Even though his employer provided a dormitory for the staff, he had to pay extra in order to have his own room. He also had to buy his own food. To make his money stretch, he would spend less than $0.30 per meal on things like stir-fried shredded pancakes. The job provided social welfare, health care and a pension but as a new graduate he said he just wanted to make more money.

Wang: Over the years, she held many jobs at the state-owned firm including repairing machine tools, which had nothing to do with her major. Her starting salary in 1999 was 600 yuan ($84) a month, which she felt was sufficient because the company offered perks like cheap rent and kindergarten classes for their kids. By the time she left the company to become a full-time mom in 2009, she was earning 5,000 yuan ($700) a month plus a bonus.

China joined the World Trade Organization in 2001 and trade with the rest of the world took off. What did China’s economy feel like back then?

Tai: It was around this time that he left his government job to work in the private sector. His salary as a water technician was 2.5 times higher than at the state-owned firm at 1,580 yuan ($220) a month. Then in 2005, he started his own water treatment business, bought his first car and apartment in Beijing. “Those of us born in the ’70s really reaped the benefits of China’s rapid growth. In the early 2000s, it felt like whatever we did, if we worked hard, we’d make good money,” Tai said. Unlike his elder sister who worked in shoe factories, he was able to sign his children up for school in the city because he was officially registered in Beijing.

How were they able to get a household registration in Beijing?

Tai:“The state-owned firm I worked for helped me register in Beijing,” Tai said. Back then he didn’t realize the importance of being officially registered in Beijing but now he feels it is a valuable thing because this allows his kids to attend public schools in Beijing, which are among the best schools in China.

Wang: The state-owned firm she was employed at previously helped her register in Beijing. While she is happy that she can do things like buy property in the nation’s capital, she doesn’t think she would be able to afford to do it anymore. She and Tai bought their two-bedroom apartment in 2005 for about 400,000 yuan ($56,000). Their property now sells for almost 6 million yuan ($839,000). Another big expense is educating her daughters. The youngest, Doris, has had extra tutoring in English at a cost of $2,800 a year. Although this fee is modest compared to what her daughter’s classmates are paying for extra tutoring. “Most of her classmates have tutoring in English, advanced math and calligraphy classes and they also learn a few musical instruments,” she said.

[Marketplace note: This is equivalent to five months wages in a factory.]

Tai: From a material standpoint, his life has improved a lot. He can eat meat every meal if he wants. However, there continues to be a lack of opportunity for young people in the countryside. “The gap between the village and the city keeps getting wider. There is no life in the rural areas because all the young people have left,” he said. His eldest daughter now attends a top university in Beijing. Tai has saved up just in case his daughters want to continue their studies abroad, maybe in the U.S.

Wang: She can see the huge difference between her generation and that of her grandparents generation who remember starvation. Like her husband, she also left her parents behind in the village, but the couple sends money back. This has transformed the countryside. “Almost every family has built a two-story home. My village finally has running water, electricity and paved roads,” Wang said. However, she does worry about her aging parents. When her parents get sick, Wang has to help pay the medical bills because the pension and health coverage are not sufficient in the countryside. Wang, on the other hand, has a pension from her previous employer and will not need to be burden on her daughters.

President Donald Trump suggests the Chinese are the winners in the U.S.-China trade relationship. Agree?

Tai: He does think he is a winner. China really opened up its economy starting in the 1990s. Had a trade war taken place before then, China would have been severely impacted, but now he feels the Chinese government has more choices. No matter how far this trade war escalates, the impact on him, because he is not in the import/export business, is still minimal.

Wang: She doesn’t know if she is a winner or not. She suggests Americans should come and visit China first and get to really know what the development has been like.